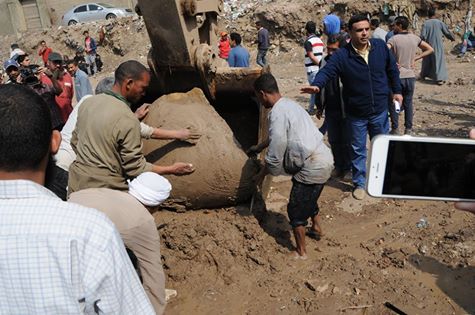 Following a media backlash regarding the use of a heavy construction excavator to extract a statue of Ramses II, the Egyptian Ministry of Antiquities said Thursday night that only the head of the statue was lifted in this manner as it was the heaviest.

The discovery was announced on Thursday morning when archaeologists, locals, and government officials started extracting the statue which was submerged in groundwater. Separate parts of the quartzite-made statue were found in the working class area Matariya, east of Cairo, including the bust, as well as parts of the head, the crown, and the eyes.

Personnel from local media documented the use of an hydraulic excavator to extract the head from the wet dirt and showed workers splashing it with buckets of water. The images caused an uproar, while criticising the ministry for not applying more advanced methods to excavate the new discovery.

Mahmoud Afifi, head of Ancient Egyptian Antiquities at the Ministry of Antiquities said in a statement published on Thursday that the head was extracted using the excavator, but wood bars and cork were placed to ensure that the monument was not being damaged. He added that the extraction was conducted under the supervision of German and Egyptian archaeologists.

The official furthermore stated that the rest of the statue remains in the ground and that there was an ongoing operation to study further methods of extracting them. 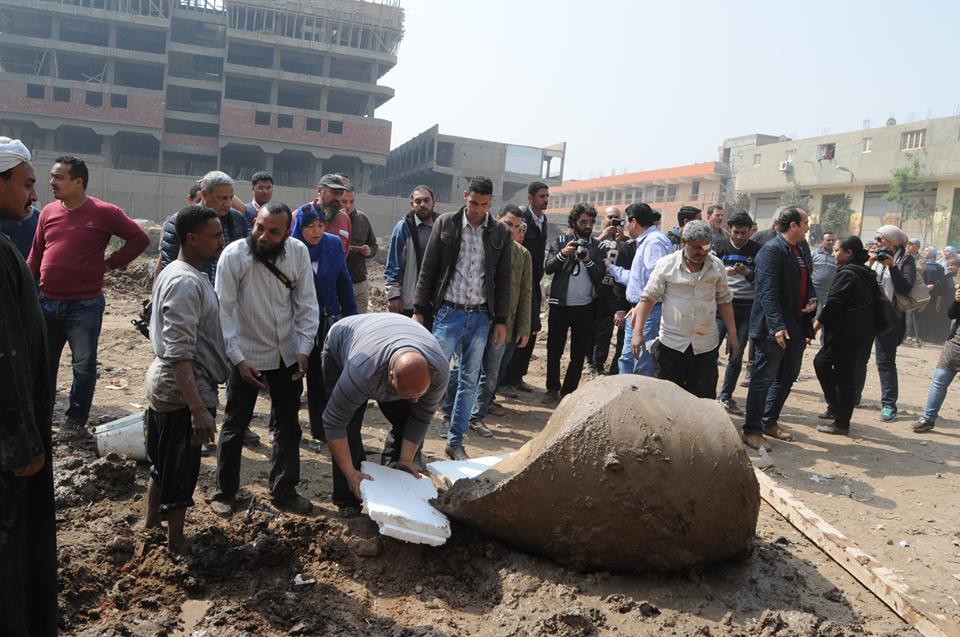 The statement also quoted Dietrich Raue, head of the expedition’s German team, saying that the statute was not broken during the lifting process.  Daily News Egypt however cannot confirm the authenticity of Raue’s statements.

Raue told state media that the excavations are continuing.

In case the statue is fully collected, it will be moved to the Grand Egyptian Museum, which is scheduled to be inaugurated in 2018.

The cause of the statue’s damage is not known. However, according to different reports and sources, pharaonic monuments suffered severe damages during the era of the Graeco-Roman rule in Egypt, with several of the monuments being moved to the center of rule at the time: Alexandria. Moreover, countless statues and antiquities were moved to European capitals during later eras.

Ramses II ruled over Egypt for about 68 years and was one of Egypt’s longest-serving pharaohs, believed to have lived up to 90 years. His reign marked the last peak of Egypt’s imperial power.

Known as ‘Ramses the Great,’ he is believed to be the pharaoh mentioned in the biblical story of Moses. The great king led a period of military expansion in Egypt.

His tireless and continuous efforts of constructing palaces and temples, including the well known Abu Simbel temple in the far south, were the most notable in Egyptian history.

His mummy was found in 1881 and was moved to Cairo’s Egyptian Museum, where it quickly became one the biggest tourist attractions of the country. Other monuments found at the site included a huge temple for Bastet and large groups of mudbrick structures from the 26th Dynasty, which were used for the burial of mummified cats.

In 2008, Egyptian archaeologists announced the discovery of parts of a colossal statue, believed to belong to the king, in Tell Basta. Furthermore, in 2006, a colossal 100-tonne, 11-meter high pink granite statue of Ramses II was moved from the polluted city to a spot near the pyramids and closer to its original site.

Numerous temples dedicated to Egypt’s sun gods, particularly the chief god Ra, were built in ancient Heliopolis. But little remains of what were once the ancient Egyptians most sacred cities since much of the stone used in the construction of the temples was later plundered. The area, close to the modern districts of Ain Shams and Matariya, is now covered with residential neighbourhoods.

Egypt’s heritage sites have been plagued by looters and encroachment from local communities. Matariya is known for witnessing illegal excavations and treasure hunting. Dozens of incidents have been reported where workers had been found dead due to them digging in their backyards and falling victim to accidents.

In 2013, the United Nations Economic Scientific Cultural Organisation (UNESCO) threatened to declassify six archaeological sites in Egypt quoting a lack of experts in Egypt managing the sites as the reason.  The sites included the Great Pyramids of Giza, the Karnak Temple in Luxor, the temples of Abu Simbel, Saint Catherine’s Monastery, Saint Mina’s Monastery, and Islamic Cairo.

8 antiquities’ employees referred to trial over damage to Tutankamun mask