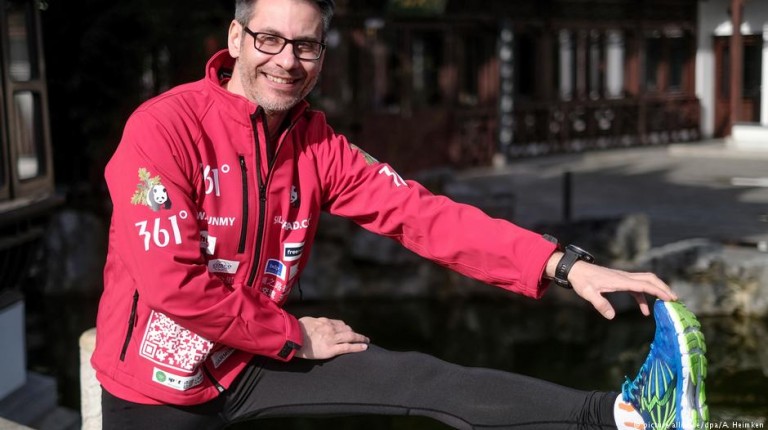 The self-described “crazy” man has embarked on journey that will take him through eight countries and take 235 days. He said there was always the risk of something going wrong but “Germans are known for our good plans.”A German man began a 12,000-kilometer (7,500-mile) run from Hamburg, Germany, to Shanghai, China, on Sunday.

Shortly after midday, 44-year-old Kai Markus Xiong left Hamburg’s newly opened Elbphilharmonie on the first leg of what he hoped will be 235-day journey.

Xiong told the German news agency Deutsche Presse-Agentur he wants to use the run to strengthen ties between the two cities and serve as an example for young people.

Accompanying him on his journey will be his trusty Volkswagen Beetle car, transporting food and towing a small caravan. He said he chose the Beetle as spare parts were available worldwide.

He wrote on his website that he wanted to correct people’s outdated views on China and bring the two cultures closer together.

Shortly after setting off he posted an update on Twitter saying everything was going well.

Earlier he told German sports news agency Sport-Infomations-Dienst he expected to go through 50 pairs of shoes on the journey and cover 80 kilometers a day.

The journey will take him through Poland, Belarus, Russia, Kazakhstan, Uzbekistan, Kyrgyzstan and finally to China.

He said he wants to conquer the Pamir Mountains in Central Asia and cross the legendary Taklamakan Desert.

Xiong said he had spent nine months planning the journey.

“Something could always happen, but we Germans are known for our good plans,” he said.

A commercial flight from Hamburg to Shanghai takes less than 13 hours including layover time.