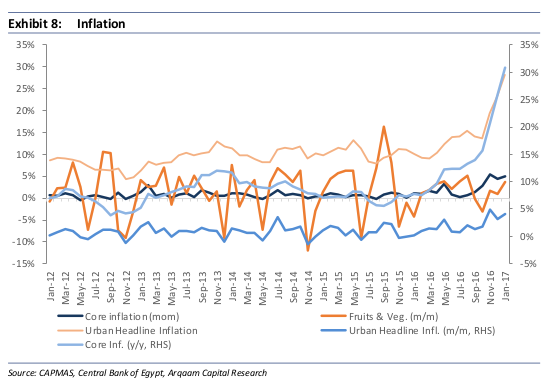 Most of the foreign exchange (FX) flows to banks are being directed to alleviating longstanding pressure on the corporate and household sectors to spur economic activity and reduce inflationary pressures, while meeting the demands of foreign companies and investors for repatriation.

According to Arqam Capital’s report “The Devil in the FX” published in February, the backlog of corporate dividends of around USD 200m is expected to be cleared, and caps on individuals’ transfers and importers’ deposits are to be lifted by June 2017, along with restrictions on individuals’ access to the FX by the year’s end—according to FX availability in banks.

The report indicates that the system is not fully funded yet. Since there are still some companies that report some unmet FX needs, individuals still need to provide documents for their FX needs and a corporate backlog still exists, although it is diminishing. However, three months after the Central Bank of Egypt’s (CBE) decision to free float the currency, a rise in FX flows, better repatriation, and a focus on getting the real economy working can be observed. Therefore it is time to focus on real flows and the economy, instead of just the FX.

The government will need to improve the restructuring to protect the less privileged from the negative impact of the reforms, especially future ones, while improving the investment climate to pave the way for the bigger,  longer term local and foreign direct investment, the report states.

Historically, Egyptians have treated the FX rate as the indicator of choice when evaluating the economy. The FX rate appreciated 16% from EGP 18.91 per USD on 19 January to EGP 15.84 per USD on 20 February. The report forecast that the uptick in the rate—which occurred on 22 February—to EGP 15.86 per USD could be a plateau before the rate reverses its direction as imports pick up towards Q2 due to seasonal factors (a prediction which came true with the FX rate of EGP 17.8 on 10 March). 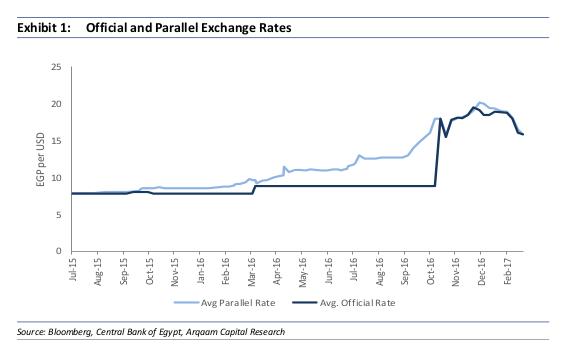 The report further examined the facts and indicators post flotation. First the CBE has reportedly cleared the pending FX financing for imported “essential goods” held up at different ports before flotation. The amount is undisclosed, along with what is left to finance imports of “non-essential goods,” although there is evidence that the latter has either been cleared as well, or is minimal at this point. Public statements had indicated $5bn was the commodities’ backlog at ports before November 2015 and which was cleared when the current CBE governor came to office at that time.

Secondly, the backlog of FX, which is estimated at about $ 400m, owed to investors attempting to exit the fixed income and equity markets in the past few months was cleared in early February, as confirmed by the CBE, some banks, and, more importantly, some major investors operating in the Egyptian market. Dividends of foreign companies operating in Egypt have shrunk in size as well, from around $400-500m to $150-200m and are expected to be processed by the banking sector by June.

Moreover, funds which multinational companies need to clear, arising from the intercompany transactions between the overseas headquarters and the company in Egypt, represent a significant bulk of the outstanding FX needs that are yet to be entirely covered by the banks, which is estimated to be between $1bn and $1.5bn.

The financing initiative—agreed on between the CBE and investors in February—will allow a significant bulk of outstanding FX loans by the corporate sector to be paid off by the CBE to banks to cover clients owing $5m or less, with the EGP equivalent being paid at an interest rate of 12%. The total outstanding corporate driven FX loans are estimated to be around USD 1.5bn.

On the other hand, FX flows to the banking sector from all sources have risen to $13.5bn since 3 November, which reflects the acceleration of FX inflows from fundamental sources, including remittances, tourism, and portfolio and equity investors. The banking sector has been able to provide $15bn for commercial transactions since the flotation on 3 November, compared to $71bn secured by the banking sector in the entire period from November 2015 to February 2017.

While the caps on individuals’ FX withdrawal and purchase limits have been raised, documentation still needs to be presented to prove the need for FX purchases. Upon submission of documents proving travel, medical billing, or tuition expenses, banks mostly fulfil clients’ FX needs—indicating an improvement in availability. Arqam Capital forecasts that once banks’ FX coffers are replenished and the remaining pending FX needs are fulfilled, the self-imposed FX limits by banks will be abolished. Sometime in late 2017, individuals will be able to request FX from their banks without the documentation restriction. According to the IMF report on the staff agreement with Egypt, the restriction on the documented transfer of $100,000 or above and the deposit cap of $ 50,000 by importers of non-essential products should also be lifted by June 2017.

In depth review of the real economy

The report continues to examine the economic indicators, such as the difference between the official and parallel FX, which has finally converged. However, the report indicated that the recent appreciation of the EGP was the result of increased FX inflows and a temporary drop in imports in January and February. A bounce back is forecast, followed by a slight depreciation in the coming month or two, as pressure builds up again with the rise in seasonal imports ahead of Easter and Ramadan, as well as for Umrah, which officially resumed recently.

Regarding the tourism sector, tourist arrivals bottomed in June 2016 in the absence of European tourists and Arab tourists from countries with banned flights, as well as the fasting month of Ramadan taking place. Prior to the downing of the Russian plane in October 2015 and the subsequent banning of flights from Russia and the UK, tourist arrivals registered at 909, 000, very close to the one million plus benchmark levels prior to the 2011 revolution. Russian tourists represented around 30-35% of total arrivals in Egypt, while UK tourists represented 8-10% of total tourism.

Afterwards, arrivals dropped to 364,000 in January 2016 and then started rising again thereafter with more tourism inflows from the Ukraine, Czech Republic, Arab and Asian countries, and some European countries, such as Germany and Italy. Recent data indicates a rise in tourists from 473,000 in September 2016 to 551,000 in December 2016, with evidence of higher spending averages per night, resulting in a rise in revenues from $510mn in Q4 FY16 to $826mn in Q2 FY17.

The 25.4% rise in December 2016 arrivals represented the highest witnessed rise in tourism inflows since November 2014, confirming the positive effect of the flotation on pricing. With the expected lifting of the Russian and UK flight bans sometime in 2017, tourist arrivals and revenues will continue to increase as pent up demand will trigger higher arrivals once the ban is lifted.

Moreover, remittances from Egyptians abroad have also been on the rise, from $3.9bn in Q2 of FY 2016 to $4.6bn in Q2 FY 2017, as a result of the restored confidence in the official FX market and the ceasing of illicit offshore activities due to the convergence of the official and parallel FX rates.

On the other hand, the manufacturing indices are reflecting an improvement in the production of food, textiles, chemicals, glass, bricks, and electrical appliances. In 2015, the FX crisis, inflation, and uncertainty took their toll on Egypt’s industrial sector, but that gradually started to change in 2016 following the economic events that took place. The overall manufacturing index reflects over 50% of total activity in each sector in Egypt.

Egypt’s PMI index remained below the 50 point benchmark since September 2015, which implies a contraction in economic activities included in the index, the PMI bottomed out in November 2016 at 41.8 points, as businesses were in dire straits. However, it started to slowly improve in December and January 2017, registering 42.8 and 43.3 points respectively. Although prices and costs have been reportedly rising in recent months, exports of non-oil products were on the rise as well, reacting quickly to the more competitive pricing.

Moreover, while exports have not historically been very responsive to competitive pricing, that started to change following the flotation, when exports started inching up—rising from $1.6bn in September 2016 to $2.0bn in December.

On the other hand, imports registered negative annual growths of 30% and 11% in November and December 2016, respectively, following the spike in import costs. Imports dropped from $6.2bn in August 2016 to $4.4bn in December.

However, not all indicators reflect positive aspects of the flotation. High inflation and the ensuing higher poverty level—at least 30%—is unfortunately the harsh cost of the economic reforms. The lengthy delay in the implementation of major economic reforms magnified their impact on inflation, raising inflation to a 30 year high of 33% in February.

The report forecast that the annual headline inflation will remain at these elevated levels throughout 2017, as seasonal and one-off shocks (higher VAT, energy prices), coupled with a negative base effect, maintain high headline numbers.  An overall average of 28% in 2017 is expected, compared to 15% in 2016. Monthly inflation will be more indicative of inflationary pressures going forward, until headline figures start declining slowly in 2018.

While the abovementioned indicators show some improvement in the real economy, Arqam believes that the environment in which corporations and consumers alike are operating is deeply challenging. Both sectors are recalibrating their behaviour to better suit the short term volatility and a new more flexible system overall in different economic systems (taxes, customs, etc.).

Therefore the greater burden now falls on the government to pick up the pace as well to cope with the structural change that has occurred in Egypt. Consumption growth will decline in the short term until wage growth and savings/transfer flows pick up and inflationary pressures decline. Corporations will attempt to squeeze costs and secure their rising working capital needs, and both sectors need a revamped playing field to support their morphing exercise.

The report concludes that the government needs to restructure subsidies to better target the poor, while increasing efficient spending on public services and goods for the less privileged. The government also needs to finalise essential regulations, like the investment law and changes to tax laws, industrial laws, and their likes in order to create a better environment for the private sector to overcome the shock therapy it experienced in 2016. Targeted sectoral changes with an improved regulatory environment will attract more investment going forward.