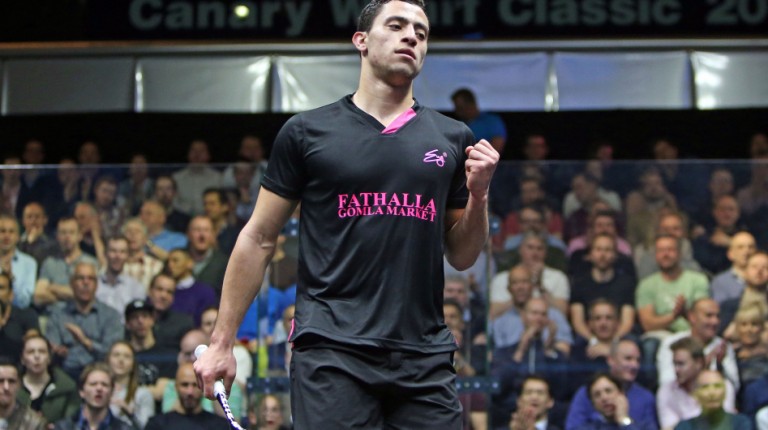 Another two Egyptians competed in the tournaments: Marwan El-Shobragy, ranked seventh internationally and seeded second at the championship; and Fares Dessoky, ranked eleventh and seeded fourth.

Dessoky won the first game by 12-10. Borja was determined to compensate his loss by winning the second game. Borja made it and won this game, which was remarkably long, ending 17-15. Dessoky took revenge, winning the third game 13-11. Borja balanced the match’s result to 2-2 after he won the fourth game 13-11. Dessoky, however, finally snatched the victory and won the match by 3-2, after he won the fifth and decisive game 11-5.

22 year-old Dessoky qualified for the final, which took place against England’s 36 year-old Nick Matthew, ranked the fourth and seeded the first.

This is the second time for an Egyptian player to reach the final of this tournament since it launched its first edition in 2004.

At the 2017 final, Dessoky lost to Matthew by 3-1. The English champion led the match thanks to winning the first games, 11-9 and 11-7. Dessoky did not lose hope and became more active in the third game, which he won 12-10. However, the English champion won the fifth game by 11-8.

This is the sixth Canary Wharf Classic title for the English champion, as he previously won the finals in 2010, 2011, 2012, 2014, and 2015. This is the thirty-fifth Professional Squash Association title for Matthew.

In this regard, Matthew stated, “I don’t want any thanks or personal gain for doing it.”