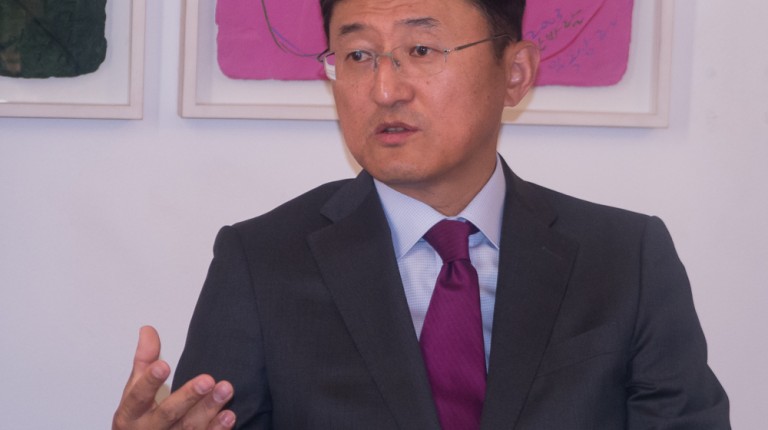 Can you give our readers a brief image about education in South Korea?

There are many reasons behind the rapid development of modern-day South Korea. Many experts say the main source of this is education.

Around 72% of students who graduate from high school go to college. The number of women who go to college is higher than that of men.

I am glad to say that the number of women wanting to become judges and high-ranking government officers is almost equal to men.

There is quite a strong trend to complete higher education, regardless of the gender.

Since South Korea is that advanced in education, is there any cooperation between Egypt and South Korea in that regard?

South Korea has a competitive edge in the field of manufacturing, and the engineering departments in South Korean universities have a very good reputation. Through the process of establishing new educational institutes or developing existing ones, creating job opportunities for youth, and setting up student-exchange programmes, we aim at contributing to Egypt’s rapid development.

As we would like to share our experience with many countries, including Egypt, we contributed a lot to the education here.

Firstly, we contributed via occasional educational programmes. We established automotive-repair centres across Egypt, to train Egyptian youth. These centres were established through grants from the South Korean government. I believe it is a very positive step to create job opportunities for the youth.

Secondly, and this is of great importance, when Egyptian President Abdel Fattah Al-Sisi paid an official visit to South Korea last year, he agreed with the South Korean president to establish a technological college in Egypt, as South Korea is the global leader in manufacturing.

I feel optimistic in this regard as South Korea’s educational system produces numerous qualified engineers.

In addition to the technological college, we are going to upgrade the engineering department at Assiut University.

How will both be funded?

Both projects will be funded directly through a formal grant from the South Korean government. The first project costs $5.7m and the second $2m.

How about the student-exchange programme?

Over the past ten years, 1,300 Egyptian students were invited to South Korea. The aim of sending them was to achieve a PhD degree, a Master’s degree, and to be trained—mostly in technical fields, including construction and engineering.

Despite only having trained for three weeks in South Korea, we are very proud that one of these students now occupies a high position in the government.

This year, we are going to invite 15 young Egyptian students to take a degree and develop in these specific fields.

How are the bilateral economic relations between both countries?

Around 31 South Korean companies are involved in business here in Egypt, including Samsung Electronics. These companies are engaged in corporate social responsibility programmes. They also provide Egyptian universities and high educational institutions with sonograms. Also, they are going to establish lab facilities in specific universities across Egypt.

Throughout the past ten years, South Korean companies have invested a total amount of around $400m in Egypt.

Samsung Electronics is one of Egypt’s largest exporters. The company contributes a lot to increase Egyptian exports to overseas markets.

After the changes the Egyptian market faced, do South Korean investors have concerns?

They do, as the value of local currency faces ups and downs. This is a disadvantage for companies operating in the Egyptian market.

I mean, the unpredictability is a negative aspect for investors, which makes them hesitate about which paths to pursue.

The bright side is, after the market stabilised a little bit, some South Korean investors see opportunities to invest in Egypt.

As for the already-existing ones, they look forward to strengthen their position by producing a larger variety of products.

I would like to highlight that economic cooperation between Egypt and South Korea does not only encompass the field of technology and electronics; there are three major South Korean textile companies that are operating here in Egypt. Once the situation gets better, and these companies show more development, I am sure they will encourage and attract more South Korean investors to the Egyptian market.

From my side as an ambassador, I encourage South Korean companies to invest in the Egyptian market.

Can you tell us about the current situation of the North Korean nuclear programme’s crisis?

Nuclear weapons are a great threat not only to the Korean peninsula and northeast Asia, but also to the whole world.

Once again, on 6 March, they launched four ballistic missiles into Japan’s exclusive economic zone, which triggered a counter-response from Japan and other countries.

If they insisted on continuing their nuclear programme, this will only lead to the isolation of North Korea, and it will further complicate matters.

Can you give our readers a brief about the South Korean cultural wave “Hallyu”?

Language is the basic gate for other cultures. We established the Korean language department at Ain-Shams University 14 years ago, where we offered a Master’s degree. This was the first of its kind in the Middle East. I think the smartest students enrol in this department, which now has around 100 students.

This was our start in Egypt. Since then, we showcased the South Korean culture in a variety of aspects, including South Korean drama movies and series.

Recently, we organised a festival for the South Korean wave “Hallyu.” It was amazing to see a lot of Egyptians attending.

In addition to Egypt, there is a strong inclination in China and most Southeast Asian countries towards the South Korean pop culture.

What about the current political situation in South Korea regarding the presidency?

The current political situation in South Korea will not affect its healthy economy and its political stability. According to the constitution and relevant laws, the currently acting president Hang Kyo-anh will continue to hold office until presidential elections take place within 60 days. Democracy and the rule of law are fully functional and working well in South Korea.

Regarding the economic side, all macro-economic indicators are positive and stable. In brief: South Korea’s stability—now and in the future—is completely guaranteed.