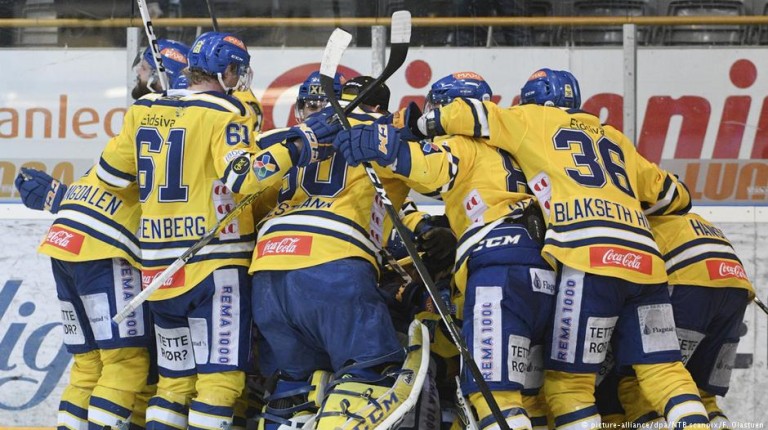 Europe’s top ice hockey clubs are into their playoffs and the Norwegian league has produced an extremely long game. The IIHF has confirmed that the match in Hamar was the longest in ice hockey history.Unlike during the regular season, when a playoff game is tied at the end of regulation time, the two teams play on until a goal is scored – no matter how long it takes.

Two Norwegian League teams, the Storhamar Dragons and the Sparta Warriors put this rule to the test on Sunday night. The two teams played to a 1-1 draw after 60 minutes, meaning Game 5 of their best-of-seven quarterfinal series would have to be decided in overtime.

The match was in its 11th 20-minute period when it was finally decided. The Dragons’ Joakim Jensen took a pass in the neutral zone, skated over the blue line and let go a slap shot from the faceoff circle that beat the Warriors netminder to win the game in the eighth overtime period – after 217 minutes and 14 seconds of play. On Monday, the sport’s world governing body, the International Ice Hockey Federation, confirmed that this was the longest hockey game in history.

It could have ended in the seventh overtime period, when Storhamar were awarded a penalty shot, but the attacker failed to convert because, according to a Storhamar report, the player “had no juice in his legs.”

The two goaltenders faced a staggering 189 shots over the 11 periods (96-93 in favor of Storhamar).

The two teams will be hoping for a quicker decision, when they face off for Game 6 on Tuesday night.

The longest game in the world’s top hockey league, the NHL, – and previously the longest in ice hockey history – came in 1936 when the Detroit Red Wings beat the Montreal Maroons 1-0 on a goal by Mud Bruneteau that came after 176 minutes and 30 seconds of play.

A game in Germany’s top flight, the DEL, game came close to that in 2008 when the Cologne Sharks beat the Mannheim Eagles 5-4 – after 168 minutes and 16 seconds. It has now dropped from the second to the third-longest game in history.

Bowling and More in Maadi