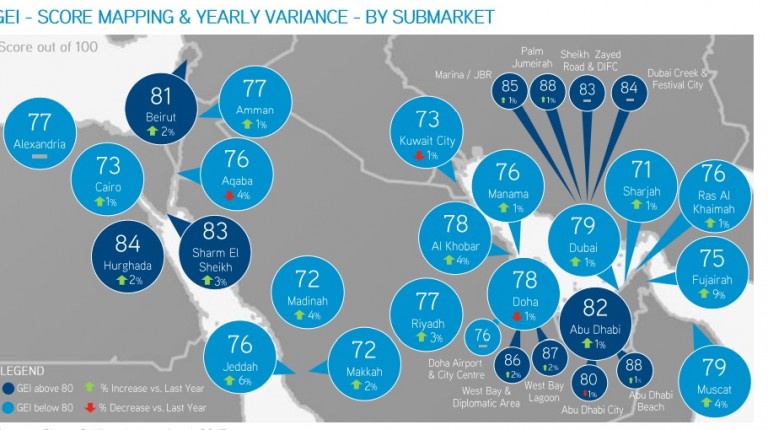 Although Cairo occupancy rates are forecast to be healthy, a pronounced drop in hotel revenues per available room (RevPAR) is expected as a result of the devaluation of the Egyptian currency in November, according to Colliers International’s “The MENA Hotel Forecasts” February report.

According to the report, both Cairo and Saudi Arabia’s Jeddah are ranked as “Work in progress” with -28% and -32% expected RevPAR growth during the February to April period, respectively; while Lebanon’s Beirut and Jordan’s Aqaba are considered touristic hot spots with a forecast RevPAR growth of 11% and 5%, respectively, for the same period.

On the other hand, Hurghada and Sharm El-Sheikh continue to feel the negative consequences of decreased tourism as a result of the recent events that have put downward pressure on tourist inflow. Hurghada and Sharm El-Sheikh are expected to witness -17% and -18% RevPAR growth, respectively. However, in the full year forecast it is expected that the four Egyptian cities will witness a RevPAR growth between 7% and 9%.

In regards to the Guest Experience Index (GEI), Colliers noted that Cairo scored 73 out of 100 in the GEI for February, marking a 1point increase, where Alexandria, scored 77, Sharm El-Sheikh scored 83, and Hurghada scored 84 which marks 0, 3, and 2 points increases, respectively.

The report indicated that the highest GEI score in the MENA region was achieved by the United Arab Emirates’ (UAE) Palm Jumeirah at 88 points, a 1 point increase. On the other hand, Aqaba’s GEI witnessed the highest recorded drop in the GEI score with a 4 points decrease, reaching 76.