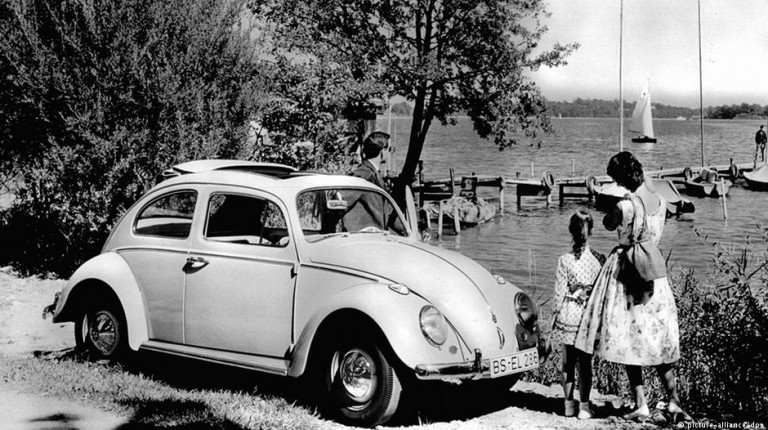 From Nazi project to public status symbol, and from East to West – a new museum exhibition highlights the automobile’s place in German society. Here’s a look back at the cars that have become cult over the years.The car has long played an important role in Germany. A new exhibition at the Haus der Geschichte museum in Bonn, entitled “Loved. Used. Hated. The Germans and their cars,” explores the social and cultural meaning of the automobile in post-war Germany.

In the 30s, the Nazis launched a savings scheme with the slogan: “Save five marks a week, if you want to drive your own car!” While many diligently set their sights on one of Hitler’s supposedly affordable “people’s cars,” designed by automotive engineer Ferdinand Porsche, the project was financially unsound and not a single saver ever received such a vehicle.

The onset of the Second World War shifted production from civilian to military vehicles. So it wasn’t until December 1945 that the Volkswagen factory, under British control, began mass production of Porsche’s car – which by then had a new name: the Beetle.

In the decade that followed, one million of the curvy vehicles rolled off the production line. The motorization of Germany became a reality, and the VW Beetle was seen as a symbol of the so-called “economic miracle” – the speedy reconstruction of Germany’s economy in the post-war era.

It’s not who you are, it’s what you drive

From the mid-50s, Germans had more money to spend on consumer goods, because employment was high and mass production pushed prices down. People who weren’t yet able to drive a car would make do with a motorcycle or a low-powered scooter.

Owning a car meant freedom and the chance to travel, initially within Germany, but later beyond the Alps to Italy – a popular destination. The variety of cars available, with their different fixtures and fittings, offered drivers the chance to express themselves as an individual. Some people even formed clubs with like-minded car enthusiasts.

A car was of course an indicator of social status, and so was the person driving it. For a long time, cars remained boys’ toys, advertised with the help of beautiful models draped over the hoods. It wasn’t until 1958 that women were allowed to sit their driving test without the permission of their father or husband.

Car-fever also hit East Germany from the 50s onwards. It was the car plants in Eisenach and Zwickau that produced the famous Wartburg and Trabant models. But East Germans who coveted their own car would have to be patient – a lack of production capacity meant that 10-year delivery times were not uncommon.

Even imported cars were hard to come by, and the only options came from the country’s socialist friends – such as the Czech Skoda or the Russian Lada. Cars from West Germany only made their way east after 1970.

The road to unification

The car was also a symbol of German separation. Much creativity went into turning ordinary cars into escape vehicles. For example, the heating system and battery were removed from the BMW Isetta in order to make space for a stowaway. On 9 November 1989, East Germans streamed across the newly open east-west border in their distinctive “Trabis” and Wartburgs.

In the West, the 1973 oil crisis, as well as reports of tens of thousands of people being killed on Germany’s roads each year, led to greater criticism of cars.

When speed limits were suggested, the ADAC car association protested with the slogan: “Free citizens demand freedom on the roads.” In the end, the government was only able to set a speed limit of 100 km/h on main roads, and a non-binding limit of 130 km/h on the highway.

The attempted introduction of compulsory seatbelts in the mid-70s was seen as an assault on individual freedom. Nobody really wanted to think about the dangers implicit in their beloved mode of transport. After a gentle push by various ad campaigns, and a less gentle push from the introduction of a financial penalty in 1986, Germans eventually got used to the idea of buckling up.

The end of the car as we know it?

In the 80s, forest decline in Germany brought the topic of vehicle pollution to the fore. In 1983, Green MPs swapped their staff cars for bicycles, in the hopes of promoting more environmentally friendly transport. Most recently, the environmental debate was stoked by the VW emissions scandal, which hit in 2015.

There have of course been some steps taken towards greener transport. In recent years, Germans have shown a marked enthusiasm for car-sharing services. German car-makers have been investing in the development of electric or hybrid cars, and the government has encouraged the adoption of this cleaner technology.

The industry will inevitably have to adapt to survive, but it doesn’t seem likely the Germans will be ready to break off their love affair with the car any time soon.

Five ways to improve air quality in our cities