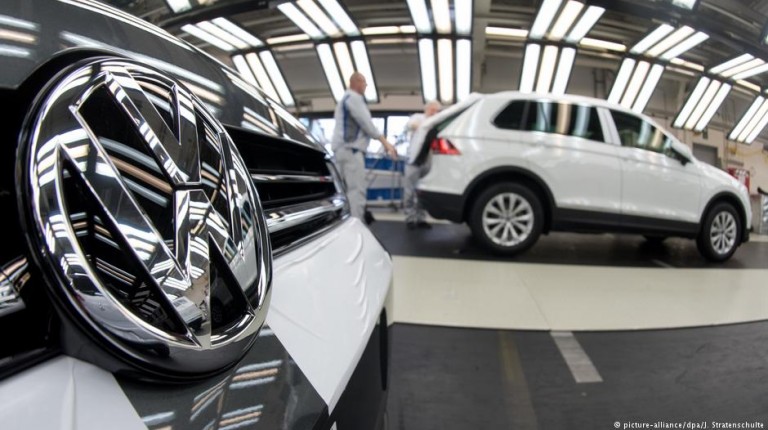 The core brand of German carmaker Volkswagen, VW, has logged another drop in annual earnings for 2016. The company said the decline came irrespective of the impact of the manufacturer’s pollution scandal.Last year, Volkswagen’s core brand, VW, booked net earnings of some 1.9 billion euros ($2.02 billion), down 11.1 percent from a year earlier and excluding one-off effects resulting from the carmaker’s global pollution scandal.

VW revenues dropped by 0.6 percent in 2016 to 105.7 billion euros, the company reported in Wolfsburg on Tuesday.

The German automaker said it wanted to make its core brand more profitable. Annual costs would be reduced by 3.7 billion euros by 2020, involving massive job cuts.

US market in focus

Volkswagen confirmed annual results for the whole 12-brand company, with bottom-line profit for 2016 coming in at 5.1 billion euros and sales rising by 2 percent – enough to topple Toyota from top position among the world’s top-selling carmakers.

Volkswagen executives said the US would remain a key market for the whole company despite US President Donald Trump’s protectionist agenda.

“We’ll stick to our investment decisions and our facilities in the US and want to play a much bigger role in the country in the long term,” CEO Matthias Müller said in a statement, pointing to the successes that Audi and Porsche had already had in the US.

Volkswagen also reported that its top executives earned a total of 39.5 million euros last year, down from the 63 million euros they received a year earlier. CEO Matthias Müller for instance pocketed 7.25 million in 2016.

The company only recently made changes to its salary and bonus program, stipulating among other things that the members of the supervisory board were no longer entitled to bonuses.

As of 2017, the chief executive must not get more than 10 million euros in annual earnings, regardless of the company’s overall performance.