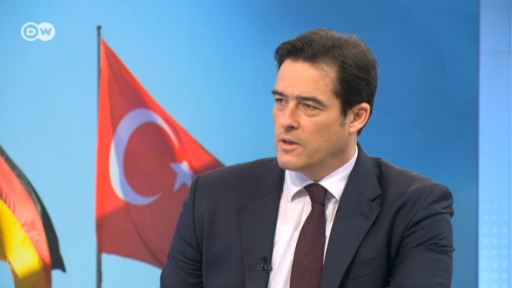 The diplomatic spat between Turkey and Germany is spreading into the business world, with uncertainty over Turkish policies affecting trade and investment, says Volker Treier of DIHK trade lobby group.Deutsche Welle: What are you hearing from companies, how badly are they affected by this row?

Volker Treier: There is more than just unease among German and other foreign investors in Turkey. The mood is really down. The lira has dropped, which has led to slowing demand from Turkey. And on the other hand foreign direct investments have been put on ice.

Can you give us an example?

The smaller the company the bigger the uncertainty about what will happen, and what is happening right now. There is mistrust among businesses because of the purges following the coup attempt. So you don’t know whether your business partner in Turkey is on the list or not. This is only one issue, showing the mistrust. The more there is mistrust the fewer businesses invest.

Do you believe this is temporary, or will it become any better?

A lot will depend on the outcome of the referendum, If approved then there is the concern of less “checks and balances,” with unfair treatment of investors compared with their Turkish competitors. Then there is no judicial system we want, namely an independent one.

How important is Turkey as a market for the German export industry on the whole?

It’s not at the top, but among the top twenty. It makes up for less tan two percent of our exports, but nevertheless it’s been one of the stars in a world still hit by a crisis – the slowdown in China, frozen relations with Russia, problems in Latin America, e.g. Brazil. So Turkey was a hope, which, however, started to fade in the middle of last year.

Volker Treier is the foreign trade representative of the German Chambers of Industry and Commerce. The interview was conducted by DW business anchor Gerhard Elfers.

Towards a new world order in Eurasia? The role of Russia and China