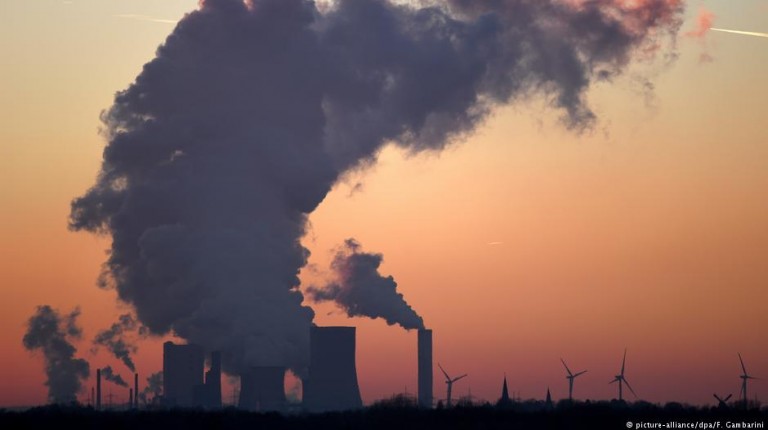 It’s high time to act if we want to reach the goals of the Paris Accord, says climate researcher Hans Joachim Schellnhuber. He also urges scientists to come out of their ivory towers to fight climate denial.DW: Where are we at with the world’s carbon budget – how much have we spent and how much have we got left?

Hans Joachim Schellnhuber: If we want to hold the 1.5 degrees [Celsius; 3.6 degrees Fahrenheit] line, which is the ambitious goal of the Paris agreement, we have maybe 300 billion tons left – more or less the budget of 10 years – if we do business as usual. If we want to hold the 2 degrees line, which is more realistic, we have another 20 to 30 years to go, but no more actually. So it’s a very tight budget.

And in order to meet this tight budget, what do you see as being the major things that need to happen between now and then?

It’s quite mind-boggling – for example, by 2030, we have to phase out the combustion engine. And we have to completely phase out the use of coal for producing power. By 2040 we will probably have to replace concrete and steel for construction by wood, clay and stone.

We now have an international climate agreement signed and ratified. Are we on track to meet our emissions reduction targets?

Germany actually has the more ambitious goal – here within the European Union – a 40 percent reduction by 2020. It looks fairly bleak actually, with the current policies in place we will not even meet our own target. Something fairly disruptive needs to happen, like closing down some of the operating coal-fired power stations.

The European Union is underambitious – it should have raised its ambition immediately after Paris, but that did not happen So it’s a very sluggish process.

Globally, there is some good news.

China has probably already peaked its emissions now, which is amazing. India has an extremely ambitious solar energy program – [and is] now investing a lot. So, the only black horse in the race is the US.

US President Donald Trump has threatened to pull out of the Paris accord. How big an impact would this have on the international climate action we’ve achieved so far?

That’s the one-billion-dollar-question. First of all, it’s not clear whether Trump will pull the US out of the Paris Agreement. I don’t think he will. Like other laggards and obstructers, in the past – like Saudi-Arabia – I think the US will just stay on-board and try to slow down all the processes.

What effect will it have? 10 years ago this would have been a complete disaster for climate policy. Now with China – the biggest emitter and also the biggest investor in renewables – and with the Asian economies now slowly changing, I think the world could achieve climate protection even without the US.

Scott Pruitt, who now heads the US Environmental Protection Agency, recently denied carbon dioxide was a major contributor to global warming. His comments go against the 97 percent consensus of the world’s scientists. Scientists generally tend to stay out of politics, but do you think given the current political climate there, scientists will become more politicized and outspoken?

I have the big privilege to work in the office where Albert Einstein worked. He’s one of the greatest geniuses and physicists of all time. And he was a very political animal actually.

I think if the very system of the scientific method and the scientific research is in doubt, then scientists have to take to the streets in the end and have to demonstrate and say: “Hey we are doing a job for you!”

World leaders will gather here in Bonn in November for the next round of climate negotiations (COP23). Is the political will on climate action still there? How important are these talks?

I have participated in, I think, 15 or 18 of these COPs. These talks are extremely frustrating and every time you think this is the last one and you will never attend [one] again. But when there’s another show in town – you have to do it.

So in the end, I think what we saw in Paris was an amazing achievement; that each and every nation more or less said yes to two degrees climate action.

Now the other thing is of course how realistic is an agreement, which is multilateral, unanimous even like in Paris? And here I think it is the task of the science to tell stakeholders, ministers, chancellors, presidents that the job to be done is extremely daunting and unparalleled.

At least of the scale of the original industrial revolution, where fossil fuels were sort of taken on board for creating the modern society. But this time we do not have 200 years for achieving and doing the job – we have only 30 years. And this is unprecedented.

We are at the crossroads now: We either say: this thing is too big for us, this task cannot be done. [Then] we will be transformed by nature, because we will end up with a planet warming by 4, 5, 6 or even 12 degrees. It would be the end of the world as we know it, and I have all the evidence. Or we say: We’re doing the transformation ourselves.

Hans Joachim Schellnhuber has been Director of the Potsdam Institute for Climate Impact Research (PIK) since he founded the institute in 1992.

Steam engine to Exxon: The evolution of climate science