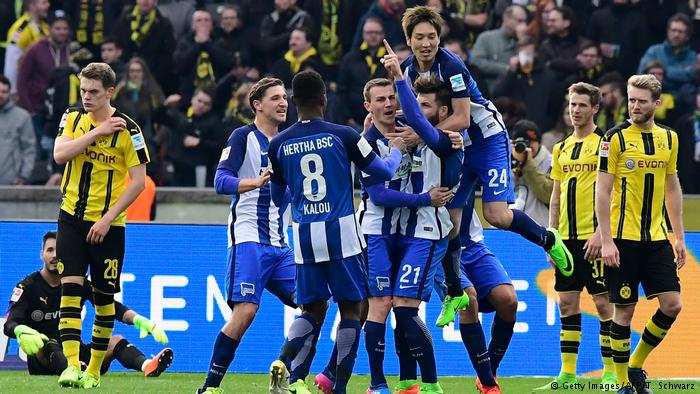 Matchday 25 presents an opportunity for a couple of teams that were prevously overperformers to steady the ship. Bayern Munich, meanwhile, could be in for an all-too rare serious test.On course for Europa – or more

Pal Dardai’s Hertha Berlin remain on course for the Europa League and a strong finish might even see them get more, having helped their cause with that 2-1 win over Dortmund on Matchday 24. However, the team with the best home record in the Bundesliga are playing in Cologne on Saturday in what they will see as an opportunity to improve what has been a weak campaign in opposing grounds. It’s not clear whether Salomon Kalou will be fit in time for the match.

Cologne, who had been one of the pleasant surprises this season, have gone off the boil, losing three of their last five league matches. At the same time, though, it should be noted that two of those defeats came against the Bundesliga’s top two, Bayern and Leipzig. That point is not lost on coach Peter Stöger, but still, early in the week he described the mood in the squad as the worst since he arrived at the club a couple of years ago. In an effort to change that, Stöger and his coaching staff reached into their bag of tricks and filled one midweek training session with various games meant to lighten the mood.

Mixing things up in Leipzig

After charging out of the starting blocks in the first half of their first season, RB Leipzig have fallen back to earth, allowing Bayern to open up a 10-point lead at the top of the table. On Saturday, Ralf Hasenhüttl’s men, who have won just two of their last six league games, will be looking to stop the bleeding against a resurgent Bremen, who are unbeaten in four – including three wins. The fitness of Bremen striker Max Kruse is a concern, but Serge Gnabry should be good to go after recovering from a knee injury.

Hasenhüttl will be forced to do without the suspended Naby Keita, but told the prematch press conference on Thursday that his team would be ready to deal with whatever Bremen throw at them.

“We have done some thinking and during the week we have tried out a few things, changed things up, because we have to be prepared for a very flexible opponent,” the Austrian coach said.

Time for Kovac to right the ship

Another of the pleasant surprises of this campaign, Eintracht Frankfurt, have not just come back down to earth but have done so with a thud – having lost five league matches in a row to slip out of the top four. Coach Niko Kovac proved his motivational skills in saving SGE from almost certain relegation late last season, now he has to prove that he has what it takes to turn things around when things have gone pear shaped on his watch. If recent history is anything to go by, Saturday’s match against visiting Hamburg could be just the ticket for the Eagles – as not only have HSV not beaten Frankfurt since 2011, they haven’t done so on the River Main since 2010.

Hamburg are where Frankfurt were at the end of last season, mired in the relegation playoff spot – but they’re tied on points with Bremen and Wolfsburg and are just three points out of 12th spot. Off the pitch, Eintracht’s former longtime CEO, Heribert Bruchhagen will be making his first visit to Frankfurt since taking on a similar role at HSV.

Looking for a first win since the Tayfun swept in

Leverkusen travel to Hoffenheim with Tayfun Korkut looking for his first win in what will be his third match since taking over from the sacked Roger Schmidt last week. Korkut’s first game at the helm was a disappointing 1-1 draw at home to Bremen, but his side did win critical acclaim from making a dignified exit from the Champions League by fighting to a scoreless draw against Atletico in Madrid on Wednesday. Leverkusen CEO Michael Schade was duely impressed by the performance, saying that “we have experienced the return of controlled football.”

Hoffenheim will go into the match one point or more below third-placed Dortmund – depending on how BVB do against visiting Ingolstadt on Friday night. A win for Julian Nagelsmann’s men could keep alive their hopes of directly qualifying for the Champions League for the first time. They have been on a bit of a roller-coaster ride of late – more up than down – with four wins and just two defeats in their last eight.

A tricky test in the Rhineland

Matchday 25 wraps up with what could be a tricky test for Bayern Munich as they travel to the Borussia Park in Mönchengladbach in Sunday’s late contest. Gladbach have been a tougher nut than most for the Bavarians to crack in recent years, with Bayern having won just one of their last five encounters. The Foals’ now not-so-new coach, Dieter Hecking, on the other hand, has lost five of his last six against Bayern. What could also work in favor of Carlo Ancelotti’s men is the fact that Bayern will be well rested after having had the week off, while Gladbach had to battle Schalke in the second leg of their all-German Europa League round of 16 clash on Thursday. Not just that, but after having started the second half of the Bundesliga season, Gladbach have gone of the boil a bit, having lost two of their last four in the league.

What to watch out for on Matchday 19 in the Bundesliga