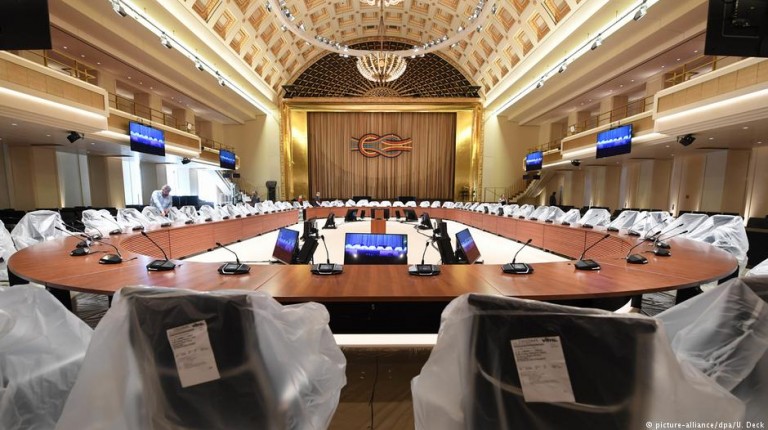 The German town of Baden-Baden is enjoying the global spotlight as it gets to host the world’s most powerful economic policymakers. They have plenty of challenges to talk about. But solutions are tough to come by.Whoever wants to test their luck at the casino in Baden-Baden may feel disappointed this weekend, as it will remain closed from Friday until at least Saturday evening.

The reason for the closure is the gathering of some very important people who control a lot of money, namely the finance ministers and central bank chiefs of the world’s top 20 economies.

Germany currently holds the presidency of the G20 grouping – a club of 20 most important developed and emerging economies in the world. The meeting in Baden-Baden sets the stage for the leaders’ summit planned to take place early July in Hamburg. The gathering will also demonstrate if any of the topics on the agenda set by the host gains traction among the participants.

German Finance Minister Wolfgang Schäuble will strive to appear as a fighter against tax evasion and avoidance by multinational firms. He would also like to set the tone on financial stability, debt reduction (his favorite topic) and forming a new partnership with Africa.

Another issue high up on the agenda is monetary policy, particularly given the divergence in the policy outlook between the US Federal Reserve and the European Central Bank.

Tackling all the above-mentioned issues requires international cooperation and a fine understanding of the causes and effects of each country’s actions on others.

But global cooperation seems to be out of vogue now in Washington, where Donald Trump’s White House espouses an “America First” policy. The new US president’s penchant for bilateral “deals” instead of multilateral negotiations is unambiguous.

He also wants to offer tax incentives to US firms, weaken the dollar and relax the regulations imposed by none other than the G20 on financial institutions in the wake of the 2007-08 financial crisis.

The top priority for the group has narrowed to ensuring that the international policymaking process runs smoothly.

Even if the G20 has long seized to be a dynamic body, it still remains the only global forum that appears to function, at least partly.

It’s still unclear whether that continues to be the case under President Trump.

Schäuble’s meeting with US Treasury Secretary Steven Mnuchin on Thursday evening offered the German minister a chance to employ all his diplomatic skills to convey the significance of his agenda to his American counterpart.

It could certainly work in the case of Schäuble’s project for Africa, named “Compact with Africa.” The plan foresees an offer of investment partnership, aimed at creating better conditions for private investment in African countries.

All eyes on Washington

Contentious issues such as the fight against international tax evasion, measures against so-called shadow banks, money-laundering and terror financing have been set for discussion on Saturday.

Nevertheless, the trickiest problem relates to monetary policy. The G20 nations have long committed themselves to not manipulating their currencies to gain undue competitive advantage. But Washington’s accusations against Berlin over the past couple of months that Germany is exploiting its trade partners with the help of a weakened euro have unnerved German policymakers.

Schäuble will no doubt reiterate once again that Germany has no influence over the decisions made by the European Central Bank.

Participants at Baden-Baden will on Friday also turn their attention to what happens in Washington, which is likely to overshadow the ministers’ gathering. There, German Chancellor Angela Merkel will meet US President Donald Trump at the White House. She was originally scheduled to fly to meet the new US leader on Tuesday, but the trip had to be postponed due to an approaching blizzard.

This time round, however, at least the weather conditions are better. The talks between the two leaders at the White House are certain to influence the discussions in Baden-Baden.