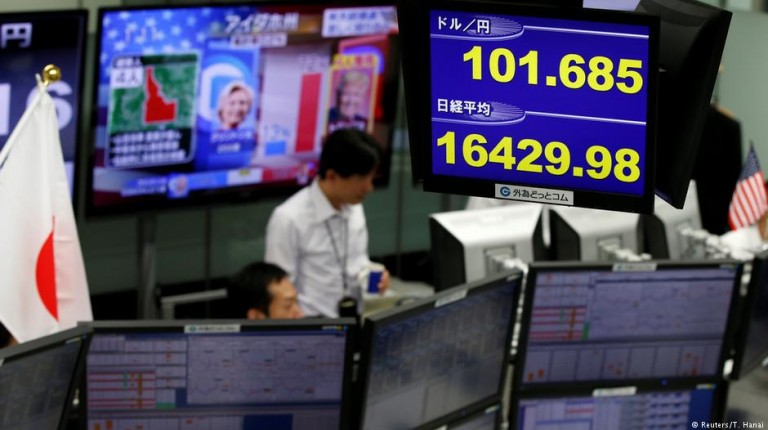 The US currency has suffered painful losses in Asian trading while sovereign bonds gained strongly after the US Federal Reserve raised interest rates, but signaled no pick-up in the pace of tightening.Asian investors breathed a sigh of relief on Thursday as fears for faster US interest rate hikes diminished and political upheaval in Europe failed to materialize.

CitiFX strategist Steven Englander said the decision by the US Fed to boost interest rates would lower the risk in financial markets for the coming months. “Buy emerging market FX [foreign exchange], equities, commodities,” he advised investors in a note.

After a much-anticipated meeting the US central bank lifted borrowing costs by a quarter of a point but suggested only another two rises this year, confounding talk of a possible three or four.

Fed boss Janet Yellen also said that while President Donald Trump’s planned big-spending, tax-cutting plans could fuel growth and inflation, she would keep a wait-and-see attitude before making any decisions on how to shape monetary policy.

The news, which came with an upbeat assessment of the world’s top economy, fired US stocks and sent the greenback tumbling in US trade.

“Whether folks agree or disagree with the need to hike, the key here is that the Fed has signaled to markets, and importantly US and global businesses, that it is in control and the economy is moving as expected,” said Greg McKenna, chief market strategist at AxiTrader, in a note.

The Fed said its inflation target was “symmetric,” indicating that after a decade of below-target inflation it could tolerate a quicker pace of price rises. That was painful news for bond bears who had built up huge short positions in Treasuries in anticipation of a hawkish Fed.

Yields on two-year notes were down at 1.30 percent, having fallen 8 basis points overnight in the biggest daily drop since June last year. The drop pulled the rug out from under the dollar, whichsank to a three-week low of 100.510 against a basket of currencies.

The euro was taking in the view at $1.0727, having climbed 1.2 percent overnight in its steepest rise since June. The dollar suffered similar losses on the yen to huddle at 113.38.

Richard Franulovich, a forex analyst at Westpac, noted the absence of any overt hawkish guidance from the Fed and their dots should leave the dollar trading on the back foot over the next month.