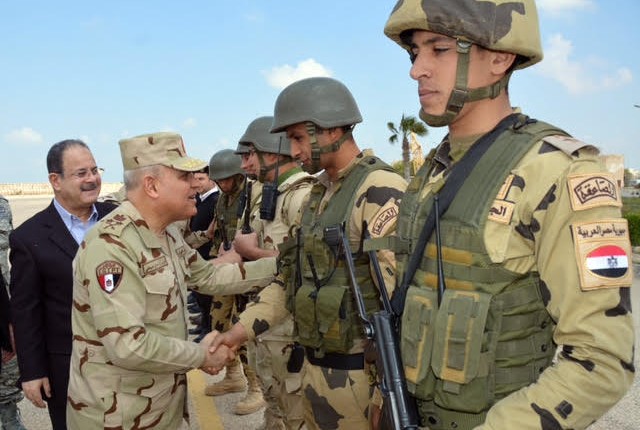 According to a statement by the armed forces, Abdel Ghaffar and Sobhi sent a message of gratefulness from President Abdel Fattah Al-Sisi to the soldiers. The defence minister added that the Egyptian security apparatuses vowed to fight and eliminate militancy and terrorism in North Sinai, alongside the police forces.

The officials stressed the role of Sinai locals in the fight against terrorism. The statement added that the officials met with some locals in the city of Al-Arish, and briefed them on the operations and listened to concerns. This comes in the wake of a recent outflow of Coptic citizens from the North Sinai city of Al-Arish, sparked by militant threats directed against them.

After the exodus of Al-Arish’s Copts, the North Sinai security chief, Sayed El-Habal, led a large-scale security operation inside the different cities of the governorate to demonstrate the security forces’ support of citizens.