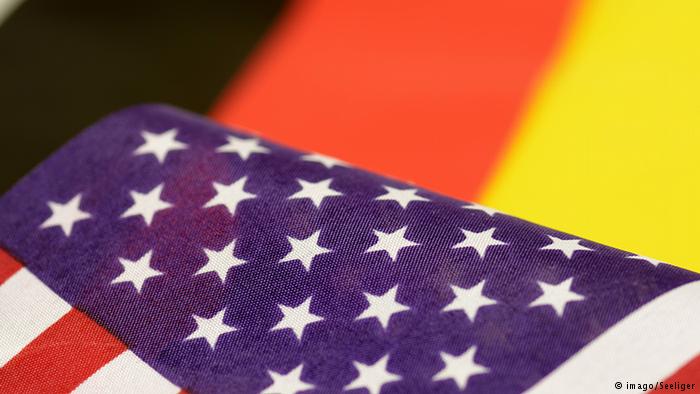 Trump does not only want to build real walls, he also wants to isolate the USA economically. Merkel will seek to fend off his plans when she visits Washington – and that is not only in her interest.Ever since Donald Trump’s inauguration, many economists have feared that his stance on foreign trade could trigger an international trade war. Sure, so far his policies have not materialized. But much of what he says seems to set the tone for the years to come; Trump wants to isolate the US from the global economy.

He wants to curb imports in order to strengthen production back home – and hopes to achieve that by implementing a 20 percent border tax on goods from countries the States have a trade gap with. Essentially, this would act like a tariff on foreign products.

German companies sold goods worth 107 billion euros ($114 billion) to the US last year, according to the country’s National Bureau of Statistics. US companies meanwhile only exported around half that sum to Germany. Protectionist threats from Washington are quite certainly also aimed at Berlin.

Trade barriers would deal a big blow to the German economy. Germany heavily depends on exports – they accounted for around 40 percent of total economic output last year. And the United States are the most important export market for German firms – around 10 percent of all German exports went over the pond.

Jobs in peril in Germany – and in the US

“We can hope that it’s all just big threats and sharp rhetoric – and then he won’t follow up his words with action,” Jürgen Matthes from the Cologne Institute for Economic Research told DW. But after all that Trump has done since taking office, Matthes was not sure whether this hope will come true.

Up to 1.6 million jobs in Germany could be in danger, Clemens Fuest, the head of Munich’s Ifo Institute, recently wrote in the Frankfurter Allgemeine Sonntagszeitung. But Trump should not forget: 600,000 of these jobs are those of American companies in Germany.

And vice versa, German companies in the USA create 672,000 jobs, according to new figures from German industry body BDI and the Representative of Germany Industry and Trade. Higher trade barriers could also threaten them. So by trying to punish Germany, Trump would also punish his own economy.

In general Trump’s plans are double-edged. Companies’ production chains nowadays often run through more than one country, which means many US firms depend on parts from abroad. A tax on those imports would make production, and with it the final products, more expensive.

“It could well be that Trump shoots himself in the foot in the long-run with such a policy, because it jeopardizes jobs in the USA,” André Wolf from the Hamburg Institute for International Economics told DW.

And also Matthes views the president’s plans critically. “Consumers and all US enterprises that depend on imports will suffer from these higher costs,” he said. “A country in the end damages itself by introducing trade barriers of this scale. Most economists agree on that.”

But Trump does not really seem to care what most economists think. He singled out German carmakers at one point, in an interview with German daily Bild, threatening to impose a 35 percent important tax on every BMW entering the USA.

Such statements are sure to make German car companies nervous; the States are the industry’s second biggest export market. Almost 15 percent of German cars sold abroad are shipped there – only the UK buys even more.

But isolating the American car industry could hurt it immensely, a new study by a consultancy firm shows. “Even American manufacturer’s losses in their home market would be so great that they’d slide into the red globally,” said Wolfgang Bernhart of Roland Berger. This would, again, result in job losses in the US.

It becomes evident: The two countries’ economies have such strong ties that a divorce will hurt both of them. But if Trump follows through on his plans anyway, it will put Germany and the EU, whose member states take a common stand on foreign trade, in a weird position. Would they strike back or comply?

“Imposing trade barriers against the US would further damage trade and the EU itself,” Matthes said. But not reacting at all would also send the wrong signal. “It’s a massive dilemma.”

But first Trump would actually have to do something, so far his protectionist propositions have been nothing but empty words. Maybe it will become clearer how serious he really is when he meets Merkel in Washington.