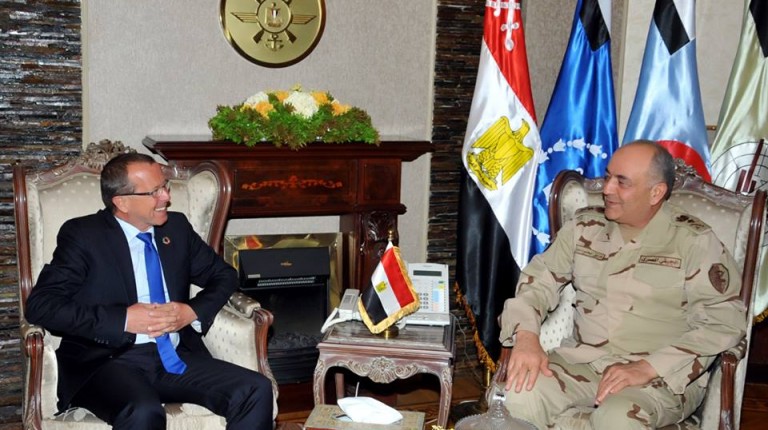 As part of the efforts to achieve a political concord in Libya, the Chief of Staff of the armed forces, Mahmoud Hegazy, met on Sunday with UN special envoy to Libya Martin Kobler, who is currently visiting Egypt, the army spokesperson said in a statement on Facebook.

The meeting discussed the new updates in Libya following several previous ones that took place between the Libyan National Committee and a number of Libyan political entities to reach a political settlement, according to the statement.

During his meeting with Kobler, Hegazy asserted the importance of all political entities in Libya reaching a peace treaty, adding that this agreement should be based on preserving Libya’s unity and stability.

From his side, Kobler expressed gratitude to the ongoing Egyptian efforts that support the political dialogue and concord in Libya.

Recently, Egypt has started initiatives for the political scene in Libya to end the ongoing political and military conflict that erupted in Libya following the ouster and killing of its long-time leader Muammar Gaddafi in 2011. What started off as a popular uprising turned into a military conflict between numerous Libyan factions, battling for control over the country.

Egypt urges all of Libya’s conflicting entities to engage in discussions that will lead to political agreements and end the military conflict, which will be followed by presidential and parliamentary elections in 2018.

Considered the western gate to Egypt, Libya has been a source of smuggled weapons and drugs over the past six years. Massive quantities have been seized by the Egyptian armed forces in several operations along the border.

The meetings of the Libyan political entities are still ongoing in Egypt and are being held under the auspice of the Egyptian armed forces and the Egyptian Ministry of Foreign Affairs, under the supervision of Kobler.