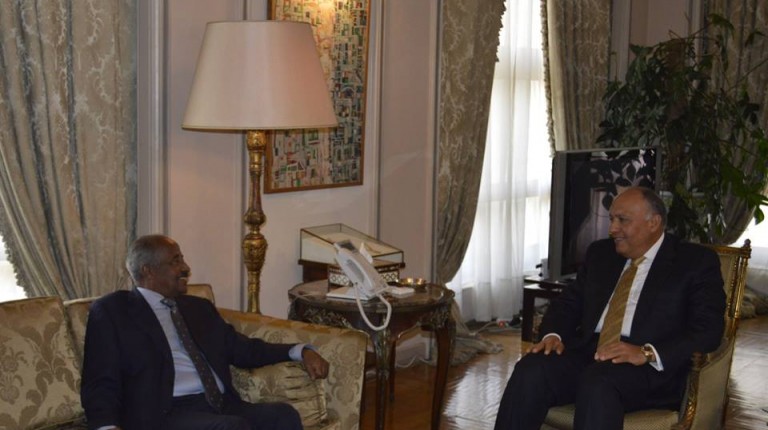 During a meeting on Sunday with a high-ranking Eritrean delegation, Egyptian Minister of Foreign Affairs Sameh Shoukry asserted Egypt’s keenness to continue negotiations with the Nile Basin countries to reach a common formula regarding the Nile Basin Initiative.

The delegation included the Eritrean foreign minister, Osman Saleh, and political and economic advisors to the Eritrean president.

During the meeting, both sides asserted their historical ties to each other and tackled a number of issues of mutual interest and regional issues, particularly the security of the Red Sea area; the latest developments in Yemen, Somalia and southern Sudan; and coordination between the two countries in international forums.

The talks included a follow-up on a high-level Egyptian delegation’s visit to Eritrea that was made recently.

Shoukry also asserted the need to coordinate on the sanctions imposed by the UN Security Council against Eritrea.

For his part, Saleh confirmed the historical relations between the two countries and his country’s desire to promote cooperation between them in all fields, which was reflected in the recent mutual visits.

Moreover, Shoukry asserted Egypt’s willingness to strengthen bilateral relations between the two countries in all fields, for which there is great potential.

The meeting between both sides focused on confirming and discussing their countries’ relations, as well as ways of increasing consultations and coordination.