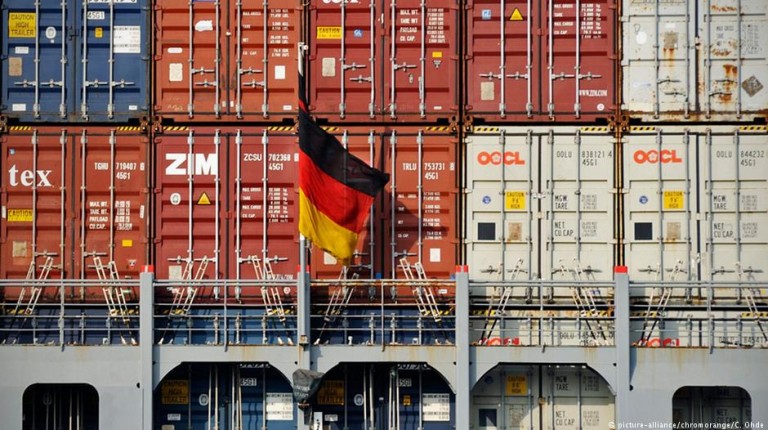 The Trump administration has targeted Germany for its big trade surplus with the United States and the rest of the world, claiming this poses big problems. Some German economists agree. Others don’t. Here’s why.On Monday, the ‘German Council of Economic Experts’ (GCEE) submitted its annual two-year economic forecast, outlining how it expects the German economy to develop in 2017 and 2018. The five-member Council is a formal advisory body established under German law to take stock of the economy and advise the government on economic policy.

More intriguingly, the Council said in a press release that these projected growth rates are above the German economy’s long-run sustainable potential growth rate, and that “the over-utilization of production capacities is increasing.”

The implication was that further economic stimulus, delivered either by higher government spending or by continued loose monetary policy in the form of ultra-low interest rates, could generate unwelcome inflation.

The statement released by the GCEE on Monday took particular aim at two policy bugbears. The first was the European Central Bank’s (ECB’s) policy of ultra-low interest rates.

The second was the allegation by some economists, including US President Donald Trump’s top trade advisor, Peter Navarro, that Germany’s massive surplus of exports over imports is a problem that harms the economies of countries – like the US – that have large trade deficits vis-a-vis Germany.

Germany exports nearly half the value of all the goods and services it produces, and while it also imports huge volumes, it consistently exports more than it imports. Germany’s trade surplus amounted to a record 253 billion euros ($272 billion) in 2016, or some 8.7 percent of the country’s GDP. That’s the highest surplus ever recorded since record-keeping by the German statistics agency began.

According to the GCEE, Germany’s huge trade surplus is not a long-term structural problem.

“Although the German current account surplus is high, it does not signal a macroeconomic imbalance,” argued Christoph M. Schmidt, Chairman of the GCEE. That’s because – in his view – the surplus is due to short-term factors which will fade with time. Those factors include the ECB’s unprecedentedly loose monetary policy; unusually low oil prices; demographic trends; and a trend for businesses to retain more of their earnings, rather than spending.

Yet the two issues – i.e. trade surpluses and ECB policy – are linked. Trump advisor Navarro, a former professor of economics and public policy at the business school of the University of California – Irvine, has accused Germany of using a “grossly undervalued” euro currency to “exploit” its trading partners in the US and Europe.

If the ECB raised interest rates substantially, buying Germany’s exports would become more expensive, when measured in dollar terms. That’s because big international investors like pension funds would become more interested in putting their savings into euro-denominated savings certificates. The higher demand for euros would drive the currency’s price up relative to the dollar. It would become more difficult for critics like Navarro to claim the euro is “undervalued.”

In this narrow sense, the GCEE agrees with Navarro: Like him, the Council would like to see higher interest rates in the euro zone, and an end to the ECB’s policy of ‘quantitative easing.’

But some German economists – including Peter Bofinger, one of the five members of the GCEE – disagree with Schmidt’s claim that Germany’s trade surplus does not signal a macroeconomic imbalance. Moreover, Bofinger sees it as a problem for Germany as well as its trading partners.

In Bofinger’s view, a key reason for the surpluses is that German workers have been underpaid, with pay rises slower than productivity gains between 2004 and 2007, and again from 2013 to 2016. That has repressed domestic demand, as well as kept exports cheap.

Ferdinand Fichtner, an economist at the German Institute for Economic Research (DIW) in Berlin, agrees with Bofinger that Germany’s current-account surpluses are a problem. Fichtner told DW that when Germany racks up current-account surpluses year after year, in effect the country is accumulating financial claims on the rest of the world. And history has shown that in aggregate, on balance, German investors have not invested well outside the country.

“For example, a lot of the surplus money went into investments in real estate in places like Spain. A lot of money was paid for buildings and land in overheated real estate markets that later deflated. In effect, a huge amount of money that had been earned by German export businesses, after being cycled through the banking system, was lost,” Fichtner said.

In Fichtner’s view, it would have been better for Germans to invest the money in building infrastructure and production capacity at home.

The German ministry of finance has reacted to Navarro’s criticism by pointing out that Germany does not determine the euro’s exchange rate with the dollar. The euro is a currency shared by 19 of the European Union’s 28 countries, including four of the largest – Germany, France, Italy and Spain. The currency is independently managed by the European Central Bank, headed by Italian banker Mario Draghi – whose policies the German government often heatedly disagrees with.

According to US economist Paul Krugman, “Yes, Germany in effect has an undervalued currency relative to what it would have without the euro… But does this mean that the euro as a whole is undervalued against the dollar? Probably not.”

The reason is that the euro is the currency for 18 other countries too – and for several of them, including Italy, Spain, Portugal, Greece, and probably France as well, it would be better if the euro were weaker, rather than stronger.

“The solution is not for Germany to export less. It’s for Germany to import more,” said Fichtner. “The way to do that is a combination of increasing domestic wages to stoke demand, making more public infrastructure investments, and further improving Germany’s attractiveness to investors.”

If government were to invest more in infrastructure, and businesses were to invest more in production capacity in Germany rather than abroad, then domestic demand would increase, and in the short term, the trade surplus might decline. But in the medium term, Fichtner conceded, the country would probably export even more as a result – and the trade surplus could widen further.

Economists warn of Brexit, but not everyone’s convinced