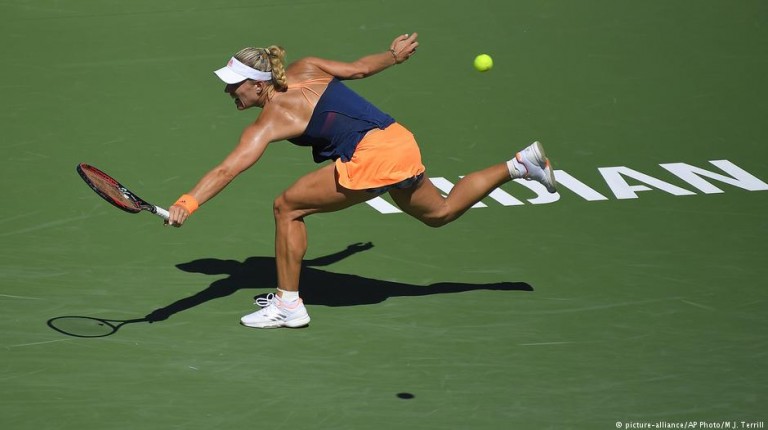 German tennis star Angelique Kerber has returned to the top of the women’s singles rankings. This comes despite her early exit at the tournament at Indian Wells in California.Angelique Kerber is back on top of the WTA women’s singles rankings, which were published early on Monday, just hours after the conclusion of the Indian Wells tournament. The 29-year-old German has unseated 35-year-old Serena Williams of the United States, who was forced to pull out of Indian Wells due to injury.

Kerber’s return to the top of the rankings comes as no surprise, as it was clear that this would happen from the moment that Williams withdrew – assuming that Kerber competed in a single match at Indian Wells.

Kerber, though, didn’t go far in the California tournament, having been knocked out by the eventual winner, Russia’s Elena Vesnina, 3-6, 3-6 in the round of 16.

Williams has dropped to second in the rankings, followed by Karolina Pliskova of the Czech Republic in third.

The American had unseated Kerber from the No. 1 ranking back in January after winning the Australian Open, while the defending champion was knocked out in the fourth round.

Britain’s Andy Murray and Serbia’s Novak Djokovic remain in the top two places in the ATP men’s rankings. By winning the title at Indian Wells, Roger Federer jumped from 10th to sixth. His fellow Swiss, Stan Wawrinka, whom he defeated in the final, remains in third play. The top-ranked German on the men’s side is 19-year-old Alexander Zverev, who is in 20th.

Angelique Kerber has nothing to lose at Roland Garros

The going only gets tougher for Angelique Kerber

Angelique Kerber battles her way through first round of Australian Open

Murray hoping for a ‘different result’ against Djokovic