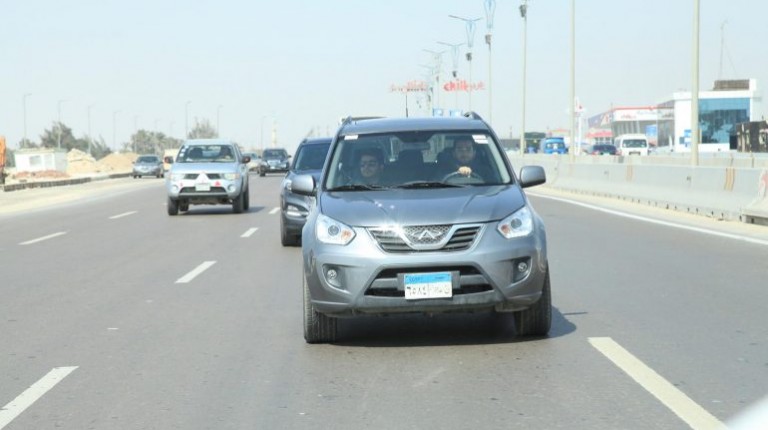 Chery Tiggo is considered one of the most distinct cars in the local market. In response to an invitation by Ghabbour Auto, Daily News Egypt had a test drive of the car to closely get introduced to its performance and strength.

Daily News Egypt headed to the company’s headquarters in the industrial zone in Abou Rawash in preparation to drive towards El Fayoum for the test drive, in addition to a two-day test on Ismailia Desert Road and a trip to Ras El Bar.

At the beginning, we made sure we tried the Tiggo 2017, as it is one of the strongest Chinese cars in the local market and was able to top the list of the most sold Chinese cars in Egypt, recording sales of 4,529 units in 2016, worth EGP 2.2bn.

Tiggo is considered a family automobile with an SUV look that suits those who search for beauty and attractive designs—something we are used to finding in Chinese cars with their unique designs that sell themselves.

Tiggo is characterised as being a car to rely on during trips—thanks to the comfort it provides for passengers in terms of space, in addition to the ability to fold seats and make more room for luggage and equipment. The car comes with many accessories to enable its owner to control most of its potential electronically.

What we found unpleasant in the car was the feeling of a draft inside it while driving at high speeds. It was difficult to determine the source of the air, even though all windows were closed, which means that there are defects in insulation.

The car does not have an electronic balance program “ESP” or an anti-theft alarm; however, Tiggo is considered the best when compared to other cars in its price category.

Regarding the car’s front, it was large, luxurious, and powerful. Moreover, it had a sports touch despite the family nature of the car.

In its outer design, Tiggo had the general attractive spirit that takes over most Chinese cars. The front and back lights are LED, in addition to front and rear fog lamps, with very strong lighting and an aesthetic touch on the front of the car.

Under the front lamps there are mist lamps that add a nice touch to the car’s front. Between the lamps are a net with a platinum “U” shape resembling the hands of Pharaonic queens, adding a touch of luxury to the car.

The front net takes the form of razor blades that work on creating circular ventilation underneath the engine to provide enough cooling as well as a distinctive shape.

The rear of the car integrates the family-car style, together with a beautiful design added by the spare wheel on the back of the trunk, whose door opens from the left to the right, unlike the rest of the cars with trunk doors that open upwards. This enables the car to accommodate a large number of bags without a problem.

Within the engine lies Tiggo’s power that matches its price, as the engine capacity is 1600cc and a maximum power of 6,150 rpm, with a capacity of 128 horsepower.

Despite the large size of the vehicle, its design is smooth and can help its driver move smoothly and easily, as well as control it on roads traffic. The vehicle is equipped with an automatic transmission with a steptronic feature.

The interior cabin of the Tiggo provides comfort to its passengers, with the leather seats and front dashboard, along with the many service-controlling buttons that allow the car owner to control the majority of its functions.

The dashboard is elegant, with the possibility of controlling the audio from the steering wheel. It has two charger plug sockets and manual devices, which passengers can use without disturbing the driver.

The car is supplied with a multi-functional air-condition, medium-sized multifunction steering wheel, large gauges, and comfortable lighting for the eyes.

It is noticeable that the car has the advantage of rear folding chairs allowing the owner to benefit from the car’s trunk (which can carry at least nine medium-sized suitcases). You can also control the movement of the seats electronically.

The rear of the car is fascinating, especially the wide lights. The rear space is an addition to its aesthetic shape, besides its essential role in cleaning the dust and water from the rear glass.

The two sides are distinguished by the streamlined shape, as well as the medium-sized tyres and sportive 17-inch wheels, which give the car a 19-cm ground clearance.

The Tiggo is characterised by good safety specifications. It is equipped with airbags for the driver and front passenger and has an anti-lock braking system (ABS); however, it lacks the electronic brakeforce distribution (EBD) and anti-theft alarm system.

The Tiggo has an advanced parking system to help the driver, especially in tight places and overcrowded areas. It has a CD player along with auxiliary inputs, in addition to power front and rear windows that can be raised and lowered by pressing a button.

The Tiggo allows the driver to close and open the doors remotely. It also features comfortable headrests on the front and back seats, in addition to electric outlets, trunk lights, and light-sensitive headlamps. The driver can also close the car’s windows remotely after closing the car.

The overall impression of the Tiggo is positive, especially in light of its price.

Despite being a family car, the Tiggo actually fits Egyptian streets, regardless of the hustle times.

The car’s fuel tank has a capacity of 55 litres, with an estimated consumption rate of about 8.5 litres per 100km. It means that the car consumes large amounts of fuel, which is normal for a powerful engine.