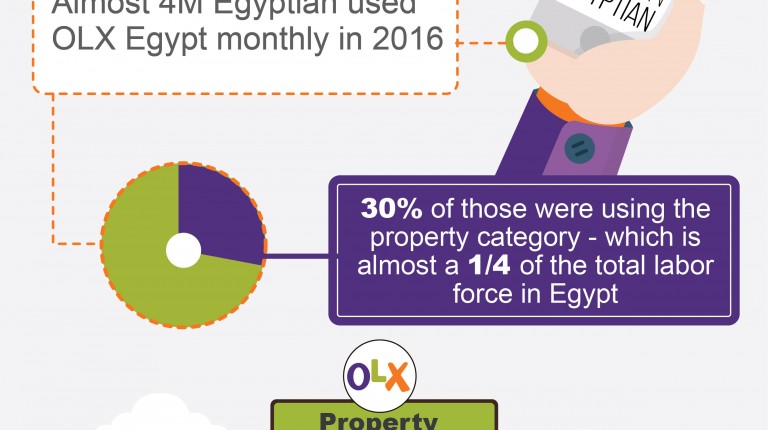 OLX Properties Egypt published the first annual property report focusing on user behaviour trends, setting the stage for 2017. The report aims to provide professionals in the industry with a holistic view of the market alternations in terms of investors’ and tenants’ preferences, along with the top searched areas for rent and sale throughout the year in Egypt.

Approximately 4 million Egyptians used OLX Egypt in 2016 on a monthly basis, 30% of which were on the property section only, which is almost a quarter of the total labour force in Egypt.

During 2016, the Egyptian economy witnessed radical changes in the prices of every product and service, including the property industry, leading potential buyers and sellers to hunt for properties online, according to the report. OLX Properties Egypt received an average of 41 million visits throughout the year—equivalent to the number of internet users in Egypt—with an average of four visits per month for each user, spending an average of 14 minutes per visit. The report stated that this data set OLX as a new major player in the property market, being users’ preference of online searches to make investment or renting decisions for their next property in the country.

Momtaz Moussa, OLX Egypt’s general manager, said that as the platform’s listings grow, the company gains better intelligence on market trends, as well as the direction upon which consumers base their decisions. He added that OLX currently has over 100 property agents advertising their properties on the website, noting that this number has been growing since adding customised packages for featured ads.

He noted that this data indicates that there is a migration from central Cairo and Giza to the outskirts, with residential supply there growing from 113,000 to 126,000 units between 2015 and 2016—a growth of 11%.

“As sales prices have risen by 30%, this has affected the affordability of the local consumer. Developers have reacted to this by planning for more apartments over villas and by extending their payment terms, hence the search for apartments is much higher,” he added.

Moreover, Sami said that it there is still demand for areas like Heliopolis, Nasr City, and Maadi, where all those districts continue to host many multinational corporations.

He gave the example of City Stars Mall, which caters for the Nasr City and Heliopolis residents, while Maadi still hosts several oil and gas corporations.

He pointed out that the main factors for the selection process are either being close to work or being close to their extended families, which is a cultural aspect in Egypt. Other factors include accessibility and being close to major attractions, destinations, or airports, according to Sami.

Statistics from OLX identify that each property listed on the platform receives an average of 7 inquiries, with the first inquiry happening within 48 hours of a listing being published. Last year, the platform introduced multiple new features to provide a smoother user experience on the mobile app OLX Arabia, such as saving their searches and chat messages. The number of chat messages in the property section reached 713,144, with an average of 2,641 chat messages per day, the report highlighted. The report noted that these results can serve as a crucial guideline for experts in the property section, highlighting trends of potential investors and tenants.

OLX’s report highlighted as well that each property for sale received on average five leads across all platforms.

In terms of supply in the last quarter of 2016, the top eight governorates that had listings for sale on OLX were Cairo, Giza, Alexandria, Suez, Sharqeya, Matruh, Daqahleya, and South Sinai.

In addition, each property for rent received on average seven leads. In terms of supply in the last quarter of 2016, the top eight governorates in terms of property listings for rent were Cairo, Giza, Alexandria, Daqahleya, Qaliubiya, Suez, Port Said, and Ismailia. “This provides insights on where the Egyptian population is willing to invest in new property and which governorates are mostly considered for rental by users,” the report stressed.

According to JLL, Egyptians prefer to buy rather than rent. With the migration that is occurring from the city to the outskirts, rentals are acting as a temporary interim solution, before tenants move into their permanent homes. Rental prices for larger villas have declined over the year more than apartments, partially due to the reduced demand from expats, who prefer to reside in the New Cairo/Fifth Settlement area to be closer to work, since New Cairo has become the new hub for multinational corporations. The higher amount of apartment searches is coming from the migration that is occurring from within the city.

Commercial space is more commonly rented. JLL added that there were no new shopping center spaces introduced in 2016, with the total supply remaining at 1.3 million square metrse and the vacancy rate increasing to 17% from 15% the previous year. This was a tough year for retail, due to the shortage of US dollars in the market and a huge devaluation of the pound. Rental rates were still flat; however, the negotiations between tenants and landlords become tougher with the achievement of the quoted rents being less likely.