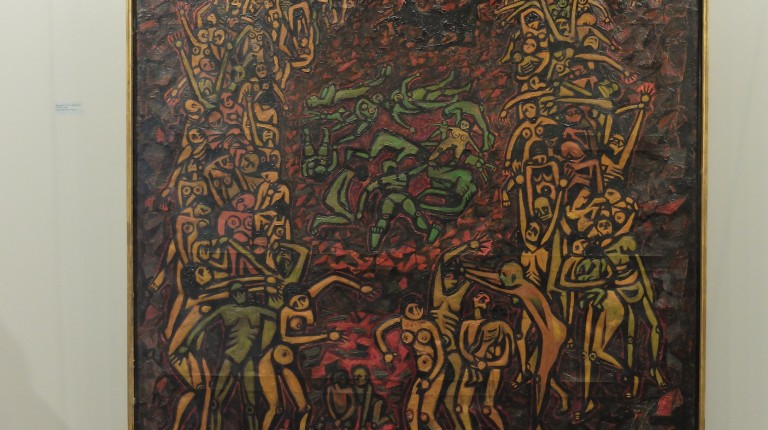 For a week Alexandria’s Ahmed Morsi had two solo shows in the United Arab Emirates. Not only is the Egyptian modernist a solo show at Sharjah—which is ongoing—this week he is also featured at Art Dubai, which ran until 18 March. The Gypsum Gallery placed a large painting of his prominently at the entrance to the main hall of the fair.

Dubai Crown Prince Sheikh Hamdan bin Mohammed bin Rashid Al Maktoum paused for a moment to examine one of Morsi’s paintings as the Emirati royal entered the fair with a large delegation of Emirati ministers and bureaucrats.

The octogenarian Morsi now lives in New York but made the journey to Dubai to attend the fair. While Morsi’s early works were influenced by cubism and surrealism, his mature works on display at Art Dubai show some of his later works.

“Throughout the periods in his work, horses have been a reoccurring motif,” says Aleya Hamza, the curator of Gypsum Gallery. “You can find horses even in his earlier surrealist works, as well as those that are more cubist in nature. The horse can serve as a stand-in for the artist or perhaps all of humanity. Anyway let me just say that the idea is open to interpretation.”

Morsi is more than just a painter. His long, creative career includes being the first Egyptian set designer in Egypt, working as a cultural journalist, and writing poetry. Samir Gharib, a notable Egyptian art critic, once stated that “Ahmed Morsi paints his poetry and writes his paintings.” Some of his poems are displayed alongside his work at the Art Dubai fair.

Morsi was just one of the over 500 artists to be featured in the 2017 edition, which is expected to attract thousands of visitors. The first fair was held in 2007 as part of Dubai’s Art Week, which according to a report released last year contributed $35m to the Emirati economy in 2015.

One of the highlights of the annual Art Dubai fair is the unveiling of the winner of the 9th Abraaj Group Art Prize—this time won by Rana Begum. The Bangladesh-born and London-based artist’s winning work of geometric design was unveiled at the fair. Egypt’s Doa Aly was among the finalists, earning the young artist a cash prize and space for her video installation and sketches at the event.

“Being a finalist is really important and getting nominated is the first step towards commissions and greater recognition within the region and globally,” said Aleya Hamza.

The Abraaj Group Art Prize has been kind to Gypsum Gallery. Prior to this year, other Gypsum Gallery artists have been shortlisted for the honour, including Setareh Shahbazi and Mahmoud Khaled, in 2015 and 2016 respectively. In 2014, Bassem Magdy won the Abraaj prize outright. This is an impressive run, giving that the gallery only dates to 2013.

Doa’s entry “House of Rumour” featured a looping audio-video installation. In one scene a group of actors walk in circles in a room. The viewer sits in a darkened room where the roughly 20 minute long video is accompanied by voices in Arabic and English. The work, like many, was influenced by the 2011 Egyptian revolution and its aftermath.

Dubai, as the show’s directors pointed out, is a city of 200 nationalities. Many of the world’s high net worth individuals flock to the city. This year’s Art Dubai included some 94 galleries from a record 43 countries. Of these, 27 galleries were attending for the first time this year, and one of them was Cairo’s own Art Talks.

Though it was the first time the gallery exhibited works at Art Dubai, the Art Talks brought a great line-up to the show.

Earlier Egyptian revolutions influenced the other Egyptian artists at the fair: Mamdouh Ammar (1928-2012) and fellow modernist Ghaleb Khater (1922-2009)—both part of the Art Talks booth at the modern section of Art Dubai.

“We brought the works of Mamdouh Ammar here to Dubai in part because this year marks the 65th anniversary of the 1956 Suez War and the 50th anniversary of al-Naksa, the 1967 war,” said Fatten Mostafa, who is the founder of Art Talks. “Ammar’s works, which look at war and tragedy, and Khater’s work, which looked at tyranny, are still very relevant to a region dealing with these very same issues today.”

For both Cairo galleries, the role of participating in Art Dubai remains the same—increased exposure for Egyptian artist.

“Art Dubai remains the region’s most important art show with thousands of visitor, not only from the region but from around the world. Art collectors come to buy and artists come to discuss their craft. This fair gives exposure to Egypt’s great artists on an international level,” she said.

Art Dubai concluded on 18 March while “Ahmed Morsi: A Dialogic Imagination” will finish its run at the Sharjah Art Museum on 3 June.

Penguins get Egyptian nationality by end of the year