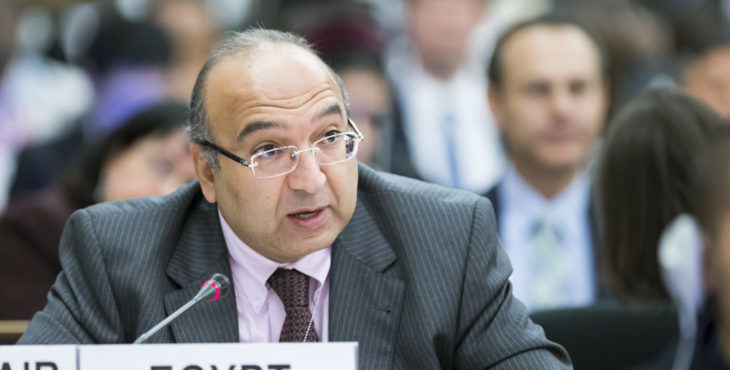 Egypt’s representative to the United Nations, Amr Ramadan, called Monday on the UN to “bring an end to Israel’s lack of cooperation with the UN Special Rapporteur, as this is a violation of Israel’s international commitment.”

Ramadan’s statements came during the 46th meeting of the 34th regular session of the Human Rights Council. The meeting discussed the human rights situation in Palestine and other occupied Arab territories, as 2017 marks the 50th anniversary of the Israeli occupation.

“The Special Rapporteur’s report highlights violations of the human rights of the Palestinian people, including the demolition of houses, infrastructure, healthcare, and education, the excessive use of force, illegal seizure of assets, the situation of refugee camps, arbitrary detention, and the situation of children,” Ramadan stated.

He highlighted that more than 5,000 Palestinians are in prisons in Israel, while there is a continuation of construction of settlements, which is a “flagrant violation of international law.”

This also comes as Mohamed Alyyan, a lawyer from Jerusalem affiliated with the Cairo Institute for Human Rights shed light on the daily suffering of Palestinian families, which he said were “targeted by collective punishments of the Israeli occupation and live in continuous pain.”

Among the violations, he highlighted the mutilation of the bodies of executed Palestinans, the conditions of their detention and arbitrary measures undertaken against the relatives of “martyrs and detainees.”

Adressing the session’s president, Alyyan said, “we don’t even have time to breathe or cry. We have exhausted all domestic remedies, and we come to you for protection, calling on you to investigate the violations that have been ongoing for the past 50 years.”

In the absence of an Israeli delegation at the meeting, Palestinian representative Ibrahim Khraishi expressed his condemnations for Israel’s non-cooperation with the UN Special Rapporteur on the Situation of Human Rights in the Palestinian Territories Michael Lynk.

“We express our condemnations for Israel’s non-cooperation with the Special Rapporteur by not allowing him to visit Israel are another proof of how Israel disregards the UN, its mechanisms and resolutions, despite being a full member of the UN,” Khraishi said.

He further stated that the lack of accountability is one of the main causes for the continuation of violations and Israel’s harassment of civil society workers, journalists, and the media, calling on the international community to “stop such provocative actions and investigate such acts of reprisals and attacks.”

“The Palestinian president reviewed recent Palestinian contacts with the new US administration, during which the Palestinian side underscored its commitment to reaching a comprehensive solution with Israel. Al-Sisi affirmed that the Palestinian issue will be discussed with US president Donald Trump during his visit to Washington early in April,” a statement issued Monday by the Egyptian presidency said.