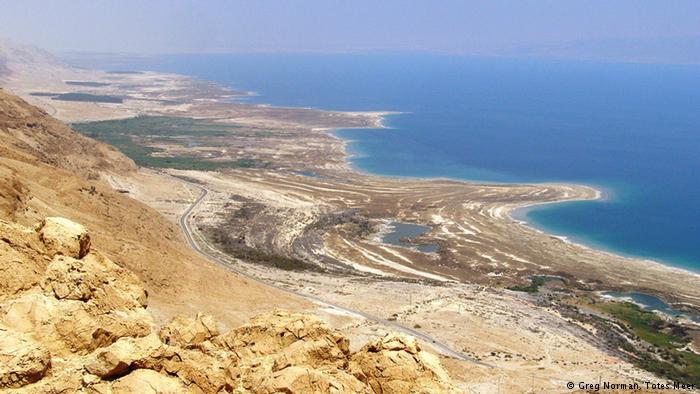 The lowest body of water in the world, famed for its health benefits, is disappearing, threatening livelihoods and nature. As the Middle East faces growing water shortages, reversing the decline is a huge task.Gundi Shachal moved to Ein Gedi, a lush green oasis on the otherwise arid but dramatic south-eastern shore of the Dead Sea in Israel, nearly 40 years ago. Over the decades, the view has changed dramatically.

“In 1983 we opened up a new spa at the beach. People could just walk out of the building, go a few meters and they were at the water,” she told DW. “Soon after opening the premises the sea level began receding and now we have to operate a train to take people some two kilometers to the sea.”

The Dead Sea is already Earth’s lowest elevation on land but water levels are ever decreasing. Bordered by Jordan to the east and Israel and the West Bank to the west, the sea is actually a lake. Levels have always fluctuated. More than 10,000 years ago they were lower than the present 430 meters below sea level. Now the ancient lake is disappearing at an alarming rate of one meter a year.

Environmentalists fear it could all but disappear, taking the rich wildlife it supports with it, if nothing is done to prevent continued receding.

Considered a natural wonder, the lake derives its name from the fact no life can flourish there, apart from bacteria and microbial fungi. That’s because it is nearly ten times saltier than normal seawater. But a multitude of plants and animals including mammals such as leopards and the ibex are dependent on the oases surrounding the lake, which experts fear could vanish as the Dead Sea does.

Environmental NGO EcoPeace and other organizations warn that if levels continue to drop, the drier conditions will also have an impact on the masses of migratory birds that stop there each year to benefit from the mild winter climate.

Climate change is suspected of playing a role in the lake’s demise. But the biggest culprit is other human activity.

“We cannot get a handle in terms of how [climate change] affects the overall precipitation in the region yet – it is not clear enough,” says Ittai Gavrieli of the Israel Geological Survey. “But if you are looking for one main reason [for reduced water levels]… it is the use of potable water in Israel, Jordan and Syria,” he told DW.

The once mighty Jordan is the main river feeding the lake. Formerly one of the world’s great waterways – and central to the boundaries in the Middle East – extensive dams, canals and pumping stations built to divert water for drinking, have reduced the river to a trickle in some places.

“The Jordan River used to bring 1.3 billion cubic metres of water into the Dead Sea a year,” Mira Edelstein of EcoPeace told DW. “Today, 95 percent of that is diverted away from the watershed and doesn’t reach the Dead Sea anymore.”

The Middle East, in particular Jordan, is one of the most water scarce regions in the world and access to supplies is a major source of tension there. “The issue here is really the issue of the Middle East, the whole story is water,” says Gavrieli. “Clearly the Dead Sea pays for the water shortages in our region.”

People living in the region are also feeling the economic effects of the Dead Sea’s
retreat. Many businesses in the area are heavily dependent on the mineral-rich lake, famed throughout history for its therapeutic powers. It’s said to have served as one of the world’s first health resorts for Judean King Herod the Great in the first century BC.

Today resorts along the Israeli and Jordanian shoreline attract millions of visitors with the promise of relief for skin and respiratory ailments, as well as obligatory photo opportunities. Because of the lake’s high salinity, humans float naturally on the surface. Common props for photos are books and newspapers.

Meanwhile in the far south, large industries extract minerals and phosphates – primarily potash, which is used in fertilizer – from the lake. But conducting business on the shore is becoming more difficult. As the Dead Sea shrinks, thousands of sinkholes have begun to emerge. And new land that emerges as the water evaporates is dangerous and inaccessible.

“We lost quite a few businesses and income,” says spa owner Shachal. “Also, plans to develop future businesses around the Dead Sea have been packed up.”

The Dead Sea problem is a tricky one because it is hard for scientists and authorities to decide what exactly they are “saving.” Rehabilitating the lake while satisfying the region’s drinking water needs and maintaining economically valuable mineral industries is difficult. It’s a complex scientific problem in a region defined by complex politics.

The main efforts have revolved around the Red Sea Dead Sea Water Conveyance Project – a 200 kilometer pipeline that would transport water to the Dead Sea from the Red Sea via the Jordanian coastal city of Aqaba. Israel in return will sell more of its water to Jordan from the Sea of Galilee, a freshwater lake in the country’s north.

But environmentalists including Abed Sultan, a technical adviser with EcoPeace in the Jordanian capital Amman, say the project is flawed. Principally because the 200 million cubic meters of water a year it would pump northward falls far short of what is needed to stabilize the Dead Sea.

Even if enough water could be pumped from the Red Sea, environmentalists warn the project could have a negative impact on the Dead Sea habitat. Mixing water from the two might produce a chemical reaction creating algae and gypsum that could turn the lake red or perhaps white.

Sultan says efforts should instead focus on long-term investment, construction of water treatment plants and fundamental changes in water usage.

“We have developed a sustainability master plan and an investment plan,” he told DW. “It will not be easy, the total investment needed is about $4 billion… but it will require change in the way we use water and it can save both the river Jordan and the Dead Sea.”

However, even if no solutions are found and the waters continue to dwindle, the lake will never disappear completely. Its salt-heavy, briney composition will eventually form an equilibrium with moisture in the atmosphere above it meaning no more water would evaporate. Still, it will be a shadow of its former self. Some are hopeful it will not come to that.

“We’re still optimistic,” Sultan says. “We have to be.”

Celebrate migratory birds because ‘their future is our future’