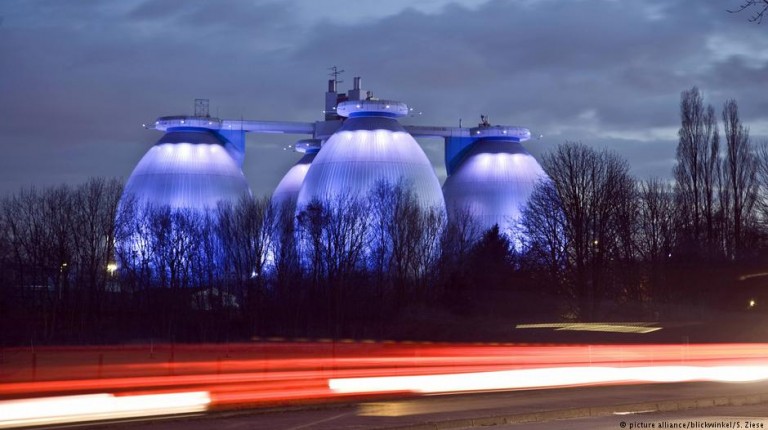 On this year’s World Water Day, the UN has called for much more wastewater to be treated and recycled. The organzation also emphasized that wastewater is an “essential component of a circular economy.”At present, “over 80 percent of the world’s wastewater – and over 95 percent in some least-developed countries – is released to the environment without treatment,” according to the UN’s new World Water Development Report, released on March 22 on the occasion of World Water Day 2017.

On average in low-income countries, only 8 percent of domestic and industrial wastewater is treated, compared to 70 percent in high-income countries, the report said. (Picture at top: Wastewater digestion towers near Bottrop, Germany.)

In consequence, in many regions, water contaminated by bacteria, nitrates, phosphates and solvents is discharged into rivers and lakes, and eventually ends up in oceans, with harmful consequences for the environment and public health.

Instead, the UN said, wastewater should be treated and then re-used, because it can be a “cost-effective and sustainable source of energy, nutrients and other recoverable by-products, with direct benefits to food and energy security.”

Nutrients in wastewater: Pollutants or resources?

For example, phosphorus recovery from wastewater is becoming a viable alternative to increasingly scarce mineral phosphorus reserves. The chemical element phosphorus is an essential plant nutrient – and it’s often the limiting nutrient. Adding more water, nitrogen, or other growth factors won’t help if there isn’t enough phosphorus available for plants to soak up through their roots. That’s why agricultural fertilizers include phosphorus.

The bulk of phosphorus production takes the form of concentrated phosphoric acids used to produce agricultural fertilizers – and demand for phosphorus is rising twice as fast as human population growth.

Phosphorus is a finite resource. It’s widespread in the Earth’s crust and in living organisms, but it’s relatively scarce in concentrated forms. Phosphate rock deposits, created when ancient sediments were deposited in shallow waters, are the main source, but only a few countries have significant reserves of it, including Morocco, China, Algeria and Syria.

Wastewater contains quite a lot of phosphorus, in part because it’s one of the main constituents of synthetic detergents used to wash clothing. As a result, rivers, lakes, and ocean areas near the mouths of large rivers can become overloaded with phosphorus, leading to ‘hypertrophication’ – in which algal blooms promoted by excessive nutrients in the water use up so much of the dissolved oxygen that fish can’t survive.
A business opportunity
Removing and recovering phosphorus (and other nutrients, including nitrogen) from wastewater has a double benefit: It prevents hypertrophication of lakes and rivers, and it recuperates a valuable finite resource that’s essential for agriculture.

This means recovering phosphorus, nitrogen, and other components of wastewater can present a business opportunity, if the financial incentives are properly aligned with the public interest in a sustainable food supply and a healthy acquatic environment. That’s why companies like Vancouver, Canada -based Ostara and Delft, Netherlands -based Lenntech offer technologies for nutrient recovery to municipal or industrial wastewater managers.

“Wastewater is a valuable resource in a world where water is finite and demand is growing,” said Guy Ryder, Chair of UN-Water and Director-General of the International Labour Organization, adding that cities, farms, and industrial installations should concern themselves with “carefully managing and recycling the water that runs through our homes, factories, farms and cities.”

A world without water