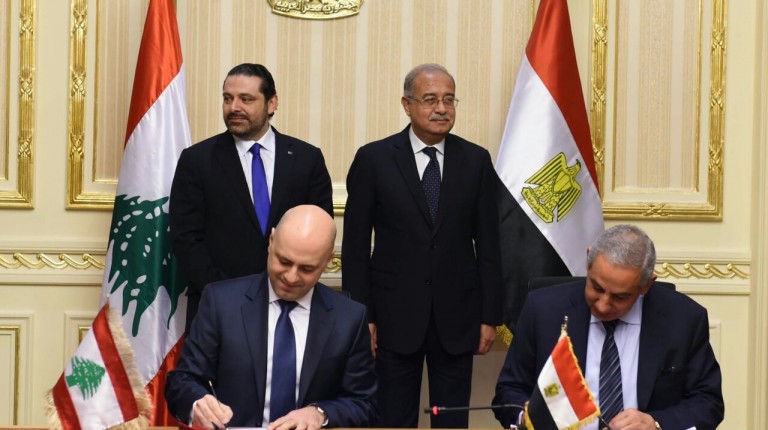 Tarek Kabil, the Minister of Trade and Industry, signed four agreements today with the Lebanese side and said they represent a large step towards activating the strategic partnership between the two countries on the economic, trade, and industrial levels, which will have a clear, positive impact on joint trade and investments over the upcoming period.

Tarek Kabil signed the agreements with Lebanese deputy prime minister Ghassan Hasbani, as well as Lebanese minister of economy and foreign trade Raed Khoury. The signing ceremony was held in the presence of Prime Minister Sherif Ismail and his Lebanese counterpart, Saad Hariri.

The cooperation agreements between Egypt and Lebanon involved the field of exhibitions and international markets, with the goal of improving the trade relations between the two countries through encouraging participation in international fairs and markets, as well as holding an annual fair for Egyptian products with high competitiveness in Lebanon, and a Lebanese fair in Egypt.

Kabil also signed a memorandum of understanding (MoU) between the Egyptian International Trade Point and the Lebanese Trade Information Center to exchange information about Lebanese and Egyptian products and services with the goal of promoting them and stressing the electronic promotion mechanisms, as well as expanding in the field of technological training that is related to electronic trade.

Another MoU was signed in the field of protecting copyrights, with the goal of encouraging local and foreign investments in both countries. This can be done through protecting all kinds of copyrights while stressing the importance of exchanging expertise and training staff in the field.

Kabil witnessed on Wednesday the signing of an MoU between the Chamber of Building Materials—affiliated to the Federation of Egyptian Industries (FEI) and represented by Ahmed Abdel Hamid—and the Syndicate of Marble Factory Owners, represented by its head, Nazih Najem.

The aim of the MoU is to encourage industrial integration and the exchange of expertise, as well as developing human resources between Egypt and Lebanon.