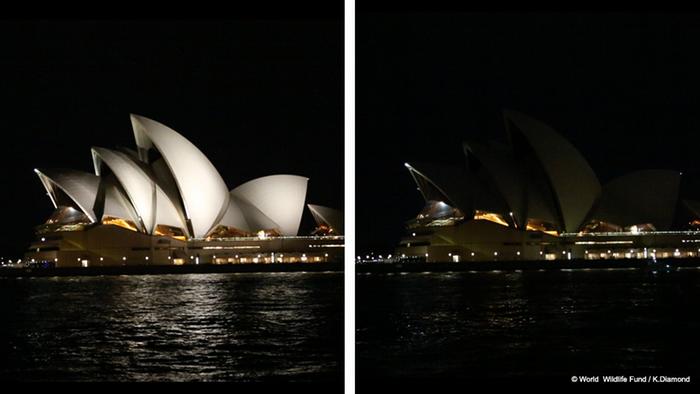 Landmarks across the world are set to go dark for an hour on Saturday to shed light on climate change. The annual Earth Hour event has grown into a global movement urging for climate action. But can it make a difference?On Saturday (03.25.17), millions of people across the world will voluntarily spend an hour in the dark to shine a light on the need for action on climate change. From 8:30 to 9:30 pm local time, they will switch off non-essential lights in their homes as a symbol of their commitment to our planet.

And it’s not just individuals who will take a stand for climate protection. Landmark buildings across the world, such as the Eiffel Tower in Paris, the Empire State Building in New York and the Colosseum in Rome, are also set to go dark for 60 minutes on Saturday.

It’s part of the World Wildlife Fund’s (WWF) annual Earth Hour event. Originally born in Sydney, Australia in 2007, it has become the world’s largest public action for the environment, spanning more than 7,000 cities in over 170 countries and territories.

‘We’re all in it together’

This year, more than 300 cities in Germany will participate in Earth Hour.

“That’s a new record and we’re surprised and excited by the large response,” Immo Fischer, press secretary for WWF Germany, told DW in an interview.

“I think one of the reasons Earth Hour has blown up like this is that it’s a relatively simple task that everyone can participate in. It creates a sense of community. When people across the world participate in the same event it sends the message that we’re all in it together,” he said.

Fischer says Earth Hour takes an upbeat approach to a topic that is often serious and uncomfortable.

“Earth Hour is not a funeral march with the message that we are all going to die if we don’t do something immediately. Rather, it’s a joyful event in which people show in a positive and fun way that they want to change something.”

In Berlin, a special event is planned in front of the Brandenburg Gate, which will switch off its lights during Earth Hour. A live band will play audience requests – on one condition: Those who request a song have to hop on a bike connected to a generator, which will power the speakers and instruments.

Does Earth Hour advocate a return to the Dark Ages?

Encouraging people to spend an hour in the dark or hopping on a bike to create power isn’t supposed to make them realize how much better we had it two centuries ago, before the first power plant was fired up – as some critics of Earth Hour have argued.

“Climate and environment protection does not mean going back to the Stone Age. Quite the contrary,” Fischer said.

“It’s about using our resources efficiently. We’re not advocating turning away from technology, we’re advocating moving towards better technologies and progress. In the end, the protection of the environment is inextricably connected to technological progress.”

Two examples are switching to renewable energy for power generation and to electric cars for mobility.

Turning your lights off for an hour won’t save the planet. It may save some energy if a lot of people and cities participate, but it won’t be enough to make a real difference in terms of annual CO2 emissions. That’s not Earth Hour’s aim.

“Our goal is to spread the message that all of us – from individual people to politics and the economy – have to do more to protect our climate,” Fischer said. “And not just one hour a year. The symbol of Earth Hour is 60+, and that already says it all. We have to do something beyond the hour.”

According to Fischer, small steps throughout the year – such as leaving your car in the garage and cycling to work, cutting down on meat consumption, and buying more regional products – make a real difference.

“That’s how you can bring the idea of Earth Hour into your daily life routine.”

And in some parts of the world, Earth Hour has even influenced government legislation.

The movement has helped drive climate policy in Russia, Argentina, Ecuador and Wales. It has successfully advocated for climate-friendly laws, such as a ban on plastic in the Galapagos Islands. And Uganda is home to the world’s first Earth Hour forest.

It has also raised money for projects across the globe, such as providing communities in the Philippines with climate-smart boats after typhoon Haiyan, bringing solar power to families in India, and distributing fuel-efficient stoves to households in Nepal and Madagascar.

Is it all just a marketing gimmick?

Earth Hour is often dismissed as a PR stunt. But PR is exactly what climate protection needs, Fischer says.

“We all know that climate protection is important and concerns us all but we’re all creatures of habit and like to block out problems that we’re faced with,” he said.

“That’s why it’s so important to raise awareness about this topic and bring it back onto the agenda.”

Particularly at a time when U.S. President Donald Trump threatens the Paris Agreement by pledging to back out of the historic deal, Fisher believes it’s more important than ever to show the world that climate change is real and needs to be tackled.

“Earth Hour is about letting people know that it’s time for action. We cannot wait for politicians to save our planet. Protecting our climate is a task for all of us. We need to start acting, and that in turn will show politicians that climate protection deserves their attention as well.”

How unemployment will end up in Egypt