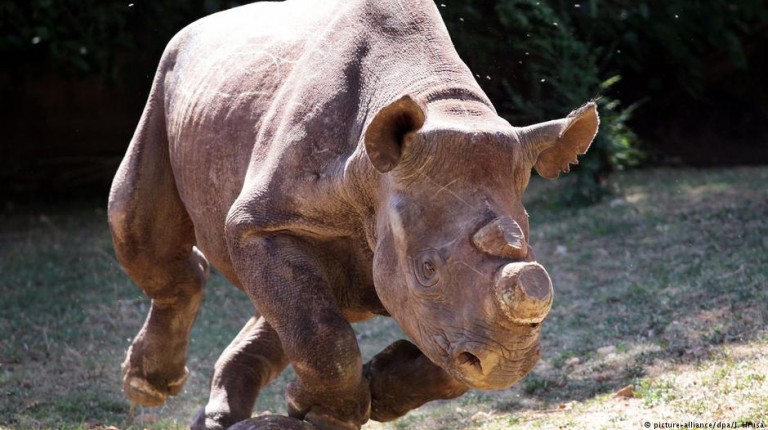 Zoos In Czech Republic and Belgium are sawing off their rhinos’ horns protect the animals, after poachers shot dead a white rhino in a French zoo. Other zoos may follow suit. But is this really the best solution?On March 7, poachers broke through security barriers at a French zoo and killed a male white rhino for its horns. The first time poachers have killed a captive animal in Europe, the crime left many in shock.

It is even more tragic considering how threatened the species is. More than 1,000 rhinos are poached in Africa each year – making a frightening impact on a global wild population of just 30,000 animals.

The severity of the situation has prompted at least two European zoos to take drastic action: They have begun sawing off their rhinos’ horns. A rare southern white male rhino named Pamir was the first to have his horns removed, at the Dvur Kralove Zoo in Czech Republic.

The Pairi Daiza zoo in Belgium quickly followed in its Czech peer’s steps, removing the horns of two of its three captive rhinos, a zoo representative told DW.

The trade in rhino horn has been banned under the Convention on International Trade in Endangered Species of Fauna and Flora (CITES) since 1977.

Demand is mainly from Asia, where many believe rhino horn has healing properties. Some years ago, a rumor that rhino horn can cure cancer spread through Vietnam, China and other parts of East Asia.

Despite these beliefs having no scientific basis, they are a main driver behind a surge in rhino poaching, according to athe German Nature and Biodiversity Conservation Union (NABU) report.

Rhino horn is so valuable on the black market, poachers are prepared to go to extraordinary lengths to get it. Which is why experts say they were not surprised by the events at the French zoo.

“There have been threats to zoos and museums for the last couple of years,” Susie Offord-Woolley, managing director of Save the Rhino International, told DW.

In 2013, British police warned zoos their rhinos may be under threat from organized poachers.

The Dvur Kralove Zoo feels such threats justify extreme measures to protect its herd of 21 black and southern white rhinos, the latter of which are particularly rare.

“The decision to remove rhino horns was not made easily at all,” Přemysl Rabas, Director of Dvur Kralove Zoo said in a public statement.

Offord-Woolley says zoos are under intense pressure to both ensure their animals’ welfare, and keep them secure.

“We are talking about armed poachers coming into zoos,” she said. “But you also have to pay attention to animal care.”

Animals cannot be shut indoors for long periods – even if that might keep them safe. Dehorning, on the other hand, does not hurt the animal as their horns consist mostly of keratin – just like our fingernails.

“The biggest risk is when the animal is immobilized,” Offord-Woolley explained. As with a human undergoing an operation, anesthesia can pose risks. But these risks are relatively minor.

“This policy of horn removal is probably sadly inevitable in the circumstances,” she told DW.

The next question is what to do with the valuable horn. Most countries have secure locations for the horns of rhinos that die natural deaths, and seizures from smugglers, Offord-Woolley explained.

Some horns are given to border police to train dogs. Others may be destroyed.

“It is incredibly important that any rhino horn is sufficiently secured,” Offord-Woolley stressed. “It is like securing diamonds.”

The Dvur Kralove Zoo said the cut horns will be safely stored away from the zoo. Ultimately, they are likely to be publically burned. The Czech zoo previously burned rhino horn in 2014, in a public act under CITES supervision.

John E. Scanlon, secretary-general of CITES, said at the time that the event “serves to raise public awareness about the impacts of illegal rhino horn trade.”

Higgins of the Humane Society agrees that destruction is the best option.

“At the very least we would expect all removed horn to be immediately destroyed,” she said.

Fewer visitors to European zoos may have the chance to see rhinos in their full natural splendor. But experts agree the priority is to end poaching.

That demands stronger cooperation between national and international authorities, Offord-Woolley said. “We know poachers travel across Europe trafficking rhino horns out of Europe in places like Vietnam and China.”

NABU is confident that with real commitment, change is possible. The group cites the example of shark fin soup, whose consumption in China was cut by around 70 percent in a relatively short time.

Much ado for Paris zoo redo

Russia ventures back to Africa with Medvedev visit