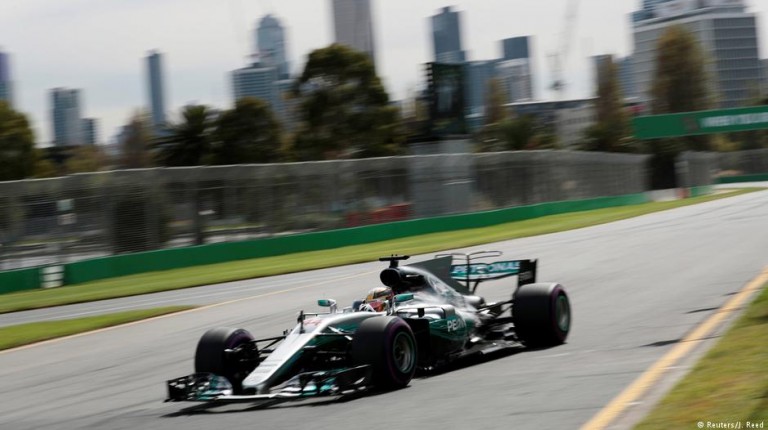 Mercedes driver Lewis Hamilton has dominated the practice runs ahead of the first race of the 2017 Formula One season. The cars are faster than in 2016, but some drivers struggled to control their vehicles.Three-time drivers’ champion Lewis Hamilton posted the fastest time in the first morning practice of the 2017 season at Melbourne’s Albert Park Circuit, and his afternoon time of 1 minute, 23.620 seconds was just one-tenth of a second slower than the best-ever lap recorded there – by Sebastian Vettel in 2011.

“I’m super happy to be back in the car – particularly after a first day like that. It was 99 per cent perfect,” Hamilton told reporters after Friday’s second practice session. “We’ve shown good form so far on both the long and short runs and we got every lap done that we wanted to.”

Mercedes team boss Toto Wolff was suitably impressed, describing Hamilton as being “in a league of his own.”

The Ferrari drivers trailed their Mercedes counterparts in the first session, but improved significantly in the second, with Germany’s Sebastian Vettel achieving the second-best lap time on the day, at 1:24.167.

“We (were) very happy at testing – times looked good, but here is where it matters,” the four-time drivers’ champion said. “The car hasn’t changed much and it’s good to be back but we can still improve.”

The other Ferrari driver, Kimi Raikkonen of Finland, had the fourth-best time, at 1:24.525.

Red Bull drivers Dan Ricciardo and Max Verstappen were third and fourth-quickest in the first session, but dropped down the timesheets to fifth and sixth-fastest in the second.

The speeds of the new cars were impressive, with many posting times that were more than four seconds faster per lap compared to the corresponding sessions at last year’s race. This is largely due to new regulations introduced for this F1 season, which were designed to make the cars quicker, including moves to widen tires and improve aerodynamics.

However, some appeared to have trouble controlling their vehicles, with Jolyan Palmer crashing his Renault into one of the barriers and Sauber’s Marcus Ericsson skidding into a gravel pit.

A third practice session is to be held on Saturday. Qualifying runs will be be held shortly afterwards to determine the order of the starting grid for Sunday’s first race of the Formula One season.