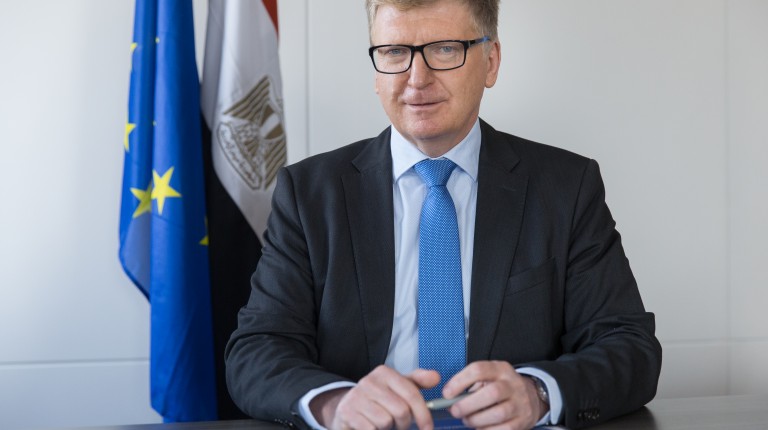 On 25 March, the European Union (EU) marks 60 years since the signing of the Rome Treaties, the first step towards a united Europe. Since the birth of the European Communities in 1957 and the fall of the Berlin Wall in 1989, the citizens of our Member States have enjoyed decades of unprecedented peace, prosperity, and security. European integration is the most successful peace project in our history.

However, we are living in unpredictable times, and the 60th anniversary of the Rome Treaties is an opportunity not only to reaffirm our commitment to the values and objectives on which the European project is founded, but also to take pragmatic and ambitious steps forward.

The EU has been a natural key partner of Egypt over the years. Egypt’s efforts to achieve stability, prosperity, and sustainable social and economic growth are at the centre of the EU engagement with our important neighbour on the other side of the Mediterranean.

The EU’s relationship with Egypt is enshrined in the Association Agreement—the basis for cooperation in a broad range of fields. The adoption of the EU-Egypt partnership priorities for the years 2017-2020 guides our future cooperation.

The world is going through a time of uncertainty when the foundations of a rules-based international order are too often being questioned. The European Union will be an increasingly vital power to preserve and strengthen the global order.

The EU is the largest global market and the leading foreign investor i n most parts of the world. We have achieved a strong position by acting together with one voice on the global stage, by playing a key role in removing barriers to international trade, as well as concluding bilateral trade deals with many important partners around the world, such as Egypt.

The European Union is the world’s largest financial donor of development aid. We were instrumental in planning the UN Sustainable Development Goals and are already implementing them, as well as working to update the European Consensus on Development Policy. Around 150 countries in the world receive development aid from the EU, including Egypt, and we are increasingly focusing on those countries with the largest needs.

The European Union is and will continue to be a strong, cooperative, and reliable power. Our partners know what we stand for.

We stand for human rights, for international cooperation, for sustainable development, and for inclusive societies. We will continue to be at the forefront of the fight against all inequalities.

We stand for better global rules: rules that protect people against abuse, rules that expand rights and raise standards. It is thanks to our engagement—the Union together with its Member States—that the global community has set up innovative agreements like the Paris Agreement on Climate Change and the Addis Ababa Action Agenda on Financing for Development. In a world of re-emerging power politics, the European Union will have an even more significant role to play.

A more fragile international environment calls for greater engagement, not for retrenchment. This is why the EU will continue to support and help the United Nations, with whom our cooperation covers peace missions, diplomatic efforts, human rights, tackling hunger, and fighting criminality. The European Union will also continue to be a strong and active partner of regional organisations like the African Union and the League of Arab States.

Whatever future events might bring, one thing is certain: the EU will continue to put promoting international peace and security, development cooperation, human rights, and responding to humanitarian crises at the heart of its foreign and security policies.

Head of the European Union Delegation to Egypt

Berlin 24/7: After the theft of the Big Maple Leaf