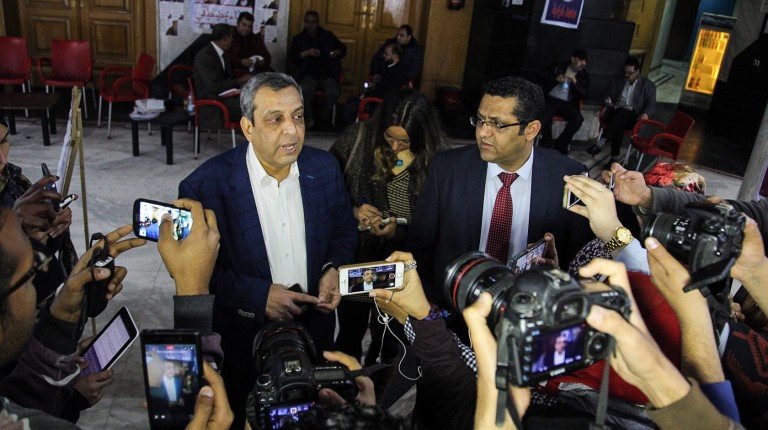 Members of the Press Syndicate asserted on Saturday that they will appeal before the Cassation Court against the verdict issued by a Cairo misdemeanours court, sentencing syndicate leaders to a suspended one-year prison term.

As so, former Press Syndicate president Yehia Qallash, current member of the board Gamal Abdel Rehim, and former head of the syndicate’s Freedoms Committee Khaled El-Balshy saw their sentence reduced to one year from the previous two-year sentence issued on 19 November 2016. They were charged with harbouring wanted suspects, the journalists Amr Badr and Mahmoud Al-Saqa.

“We will appeal the verdict at the Cassation Court,” El-Balshy told reporters at the syndicate following the verdict on Saturday. “We were defending the cause of press freedom and this syndicate,” he added.

According to El-Balshy, what currently matters more is the “continuous battle with the regime for press freedom.” He criticised the fact that no investigations were conducted into the historic, unprecedented police raid on the syndicate on 1 May.

“There is much more to this case. It is about this regime’s persistence in attacking and harassing journalists. Based on the freedoms report adopted by the syndicate’s general assembly, our case was one of 800 violations against journalists in 2016,” El-Balshy said.

The report, supervised by El-Balshy, was adopted and published by the syndicate before proceeding with the election of a new president and six council members on 17 March.

“Not only do I believe that this cause should be a priority on the agenda of the new syndicate council, but I would say that disregarding the Ministry of Interior’s assault on the syndicate would be selling the cause of press freedom in favour of benefit to and from the regime,” he concluded.

Badr and Al-Saqa had staged a sit-in at the syndicate, escaping security raids on their houses in crimes related to freedom of expression. Both were released from detention. Moreover, Badr became a new member of the syndicate’s council.

Following Saturday’s verdict, Badr commented by claiming that the case had been “obviously politicised from the very beginning.”

“Even legal experts I spoke to said the case had no legal grounds. This verdict continued the message of terrorism being sent to journalists. We should be very aware of this campaign against press freedom, and reject it,” Badr told reporters Saturday.

Furthermore, newly elected member Mohamed Saad Abdel Hafiz told reporters that he and his colleagues have addressed the new president of the syndicate Abdel Mohsen Salama regarding appealing against the verdict. He said the latter was responsive and supportive.

Commenting on the verdict, Abdel Hafiz said, “we used to think that freedoms hit rock bottom under the Mubarak regime, but apparently things got much worse. We are being suffocated by the regime in anything related to the public sphere.”

As for Salama, his press statements on Friday and Saturday came in support of the sentenced trio, asserting that the syndicate will not abandon them.

Journalists concluded the day by rallying on the stairs of the syndicate and chanting in favour of press freedom, demanding the release of detained colleagues.

In pictures: voting in Press Syndicate elections kicks off