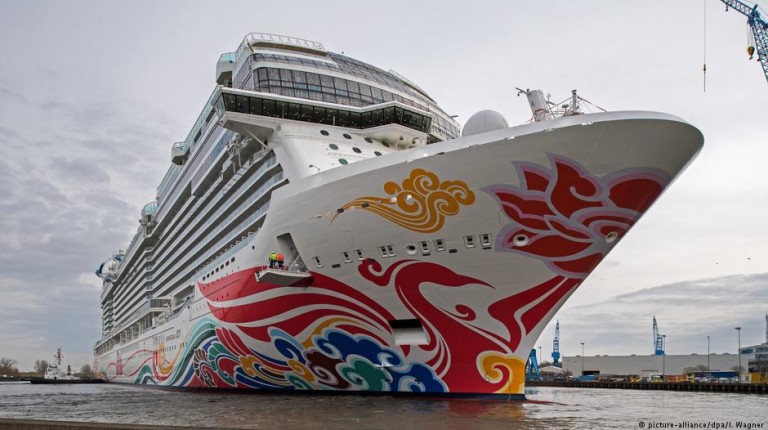 The world’s fourth-biggest cruise ship will cater exclusively for Chinese tourists. It leaves its German birthplace to sail to the north sea for testing.German-built luxury cruise liner “Norwegian Joy” was due for its maiden voyage on Sunday night.

The Norwegian Cruise Line (NCL) ship is the first in its fleet purpose-built for the Chinese tourism market. The 4,200-passenger boat will be based out of Shanghai and Tianjin and will have Mandarin as its official language.

It was due to sail from Papenburg, up the river Ems into the North Sea on Sunday night at 8.30 p.m. local time (19.30 UTC) By Monday night the luxury liner will be moored in the Dutch city of Eemshaven.

“Norwegian Joy” is the twelfth ship that the Meyer shipyard has built for NCL with two more scheduled for delivery in spring 2018 and autumn 2019. NCL is a Bermudian company operating cruise ships, headquartered in unincorporated Miami-Dade County, Florida.

According to NCL’s marketing, the ship’s deck will include a two-level electric go-cart track and an open-air laser tag course, both on the top deck.

Inside will be various levels of accommodation, a virtual-reality gaming center, hovercraft bumper cars, a water park with two multi-story waterslides, an open-air park to practice tai-chi, a casino and a luxury-brand shopping center, “Cruise Critic” reported.

One of the waterslides extends over the side of the ship and the other is transparent, the online cruise guide reported.

Meyer Werft were worried about rough weather impeding the launch on Sunday night.

“It is important that there are no gusts, as this could become dangerous, especially when passing the dock sluice and the bridges,” a spokesman told public broadcaster NDR.

The ship drew criticism for its use of highly polluting fuel – common among large cruise liners.

Nature and Biodiversity Conservation Union, a large German conservation NGO, called the shipyard “a disaster” for its lack of environmental innovation.