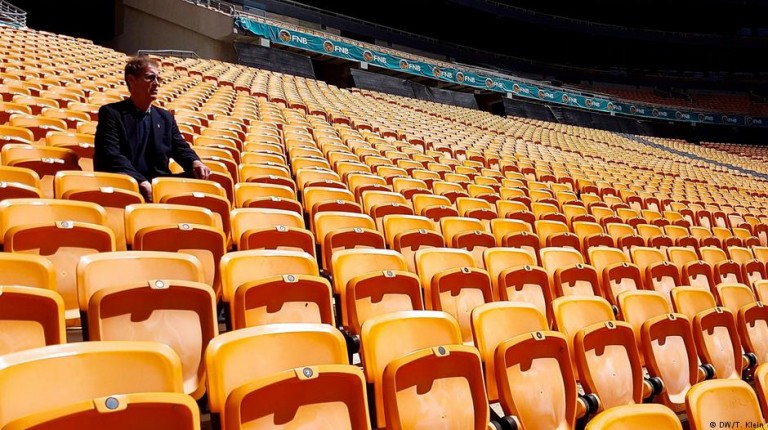 Trainer, coach, development worker. Germany’s Horst Kriete has worked in 50 different countries where he has helped developed the game and change structures. His experience abroad has made its mark on him, too.In the tiny Makhulong Stadium in Tembisa Township, just a few kilometers from Johannesburg, the volume is cranked up a notch. The supporters of Highlands Park FC wave their flags, sing, dance and clap. Thanks to a hard-fought 1-0 win over Maritzburg United, their team has just won three vital points in their battle against relegation and the atmosphere is bouncing. Vuvuzelas, drums and various other handmade instruments create a unique din across the concrete stands. A few meters further back from the celebrating fans, a smiling Horst Kriete claps along to the rhythm of the African songs which get louder and louder. Together with an old friend, Kriete is finally back at a football match in the South African Premier League.

“It’s great to hear the old atmosphere again,” says the coach. “But it’s just as great to see my old friends and colleagues from my time here. I feel right at home, it really is something special.”

Making his way through the bowels of the stadium, Kriete is constantly greeted by former students and colleagues. “Horst,” they call him, or just “coach.” Kriete responds with a short conversation here, a heartfelt greeting there. It’s been 15 years since his last visit and all are happy to see their German former coach again. Kriete spend almost six years working in South Africa, training coaches for the South African Football Association (SAFA) and working to construct a viable training system in the football-mad country.

“Football is more important than religion”

The southernmost tip of the African continent isn’t the only stop on an impressive CV, which features various positions in 50 different countries. Kriete’s football world tour started in 1979 in Nigeria where, as a 35-year-old coach, he built a national sports institute and won the Nigerian league cup with FC Julius Berger Lagos.

“Africa infected me right away and fascinated me,” he remembers. “Football means more than religion there, the people were fantastic and it was huge fun right from the start.” What was initially only supposed to be a two-year stay quickly became six – before the qualified high school teacher moved on. Somalia, Latin America and numerous other exotic locations followed.

Skin color was never an issue

“I was always happy when I saw that people had learned something from me,” says Kriete. “The progress I saw motivated me to work even harder.”

Kriete’s family is important to him and his wife, and later his children, have traveled with him.

“My son was born in 1982. He was particularly well looked after in Nigeria and played with the local children in our neighborhood. He always felt at home there.”

Crucially as a white man working in Africa, skin color was never a problem for Kriete and his colleagues.

“I never saw myself as a white man,” he says, looking back. “I was always just Horst Kriete.”

He first rose to prominence in Johannesburg thanks to his “very German manners,” remembers Christina, a former colleague of Kriete’s who still works for the South African FA. “The first thing we had to do was to teach him how to smile!” she laughs.

In addition to his expert knowledge, it was Kriete’s openness and friendliness that made the biggest impression. For Kriete himself, the most important thing was mutual respect.

“I always tried to convey ideas to people which had relevance outside of football, too,” he says. “For example, the importance of always working as a team.” Quoting Jürgen Klopp, he adds: “The best coach is the coaching team.”

‘Europeans make life hard for themselves’

As a trainer and coach, it was Kriete’s job to educate other people – but he says he also learned a great deal himself. As well as learning about different cultures and ways of life, the attitude of the African people had the greatest effect on him.

“We Europeans tend to see things more negatively and we make life hard for ourselves,” he explains. “There are many things which we consider problems which aren’t problems at all here. Here in Africa, people live life with a smile on their face – no matter how difficult things get.”

In his years in Africa, Kriete mellowed and says that the conversations he has with his colleagues are particularly important to him. Even today, he still takes time to listen and understand those he works with while trying not to take everything too seriously. His motto: “You’ve got the watch, but we have the time.” A perfect description for how the German has changed over the years.

One last dance with the fans

It’s getting late in the Tembisa Township but Horst Kriete shows no signs of fatigue. The 73-year-old still wants to have a quick word with the home team coach – yet another former student. Then there’s time for one last dance with the celebrating supporters before climbing into his car for the trip back to Johannesburg.

A day of endless meetings and reunions shows just what an exceptional job Kriete has done in this part of the world – not just as a coach, for the people here love him and remember him as a friend.