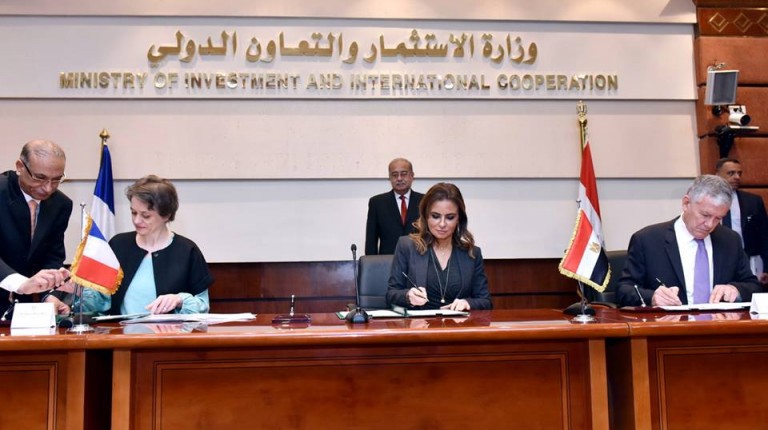 Minister of Investment and International Cooperation Sahar Nasr signed 4 agreements with the director of operations of the Agence Française de Développement (AFD), Laurence Breton-Moyet, which provide support for the sectors of energy, sanitation, and healthcare—worth a total value of €259m. The French ambassador to Egypt, André Parant, witnessed the signing.

Nasr said that the finances are divided into loans and grants, explaining that the first loan from the AFD is worth €175m for supporting the budget of the energy sector.

Nasr added that the money of the loan will be received by the Ministry of Finance, yet the electricity sector would be supported by an additional €3m as a grant that would be provided to the Ministry of Electricity and Renewable Energy to finance a technical programme.

The AFD will provide a financing package worth €31m for a project to support the quality of primary healthcare service in Egypt, which is the first of its kind by the AFD in the health and social sectors in Egypt. However, Nasr signed an agreement that provides a €50m loan to support the expansion of the East Alexandria wastewater treatment plant.

The energy loan is part of the international society’s attempts to support Egypt’s budget deficit. It also represents the second support from France announced by the French minister of finance. It will be financing the sector’s strategy until 2035, which aims at developing the energy sector (gas and petroleum), rationalising energy consumption, diversifying the energy mix, and guaranteeing a sustainable energy service.

The financing package of the healthcare programme is divided into a €30m loan and a €1m grant, which was designed to improve the quality of service for more than 700 families in the Delta and Canal regions, by providing rehabilitation, equipment, and training.

According to the AFD, UNICEF has been requested to support the implementation of the community mobilisation activities in order to increase health awareness and use of primary healthcare services in the targeted areas.

Nasr said that France, Germany, and the United Kingdom are the countries that promised to support Egypt’s budget deficit, explaining that the government has already signed the deal with the UK, has now signed with France, and will be signing with Germany soon. Additionally, Nasr is set to visit Germany on Friday to discuss German support for Egypt.

From a different perspective, Minister of Health and Population Ahmed Emad El-Din Rady stated that the finances would be used to develop the health units in the Suez Canal area.

Moreover, Breton-Moyet stated that the AFD has been helping Egypt in financing lots of projects—worth a total value of €341.4m, in addition to €103m provided by the European Union and organised by the AFD.