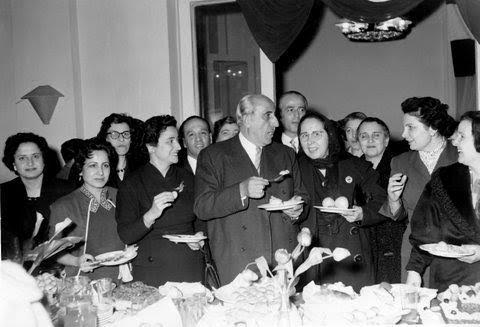 The photograph is the image of desolation. In a room that seems to have been devastated by a hurricane, shattered windows and furniture, debris everywhere, and a few torn and winding curtains that remain as mute witnesses to the disaster, a man sitting on his bedroom bed smokes a pipe while listening to a record.

The man sitting there is Mohammed Mohiedin Anis, also called Abu Omar, a 70 year-old man. The place is the al-Shaar neighbourhood in Aleppo, scene of one of the cruellest wars of recent times. His house has just been bombed and Abu Omar refuses to leave it. Instead, he lights his pipe, puts a record on the gramophone—which can work because it is manual—and is lost in his thoughts.

Abu Omar is a collector of vintage cars, most of them inherited from his father. Among them was a 1957 Mercury Montclair, a 1949 Hudson Commodore, a 1958 Chevrolet Apache truck, and a 1948 Buick, all of which would delight any serious collector. All of them, however, are destroyed, a fact which does not intimidate Abu Omar, who promised to repair them.

To a group of journalists, who visited him, Abu Omar said, “I can start from scratch. I am willing to rebuild my house, my factory, even the cars. Nothing will discourage me, destroy me, or make me surrender. You have to keep your head up.”

Paradoxically, the image of desolation conveyed in the photograph is also the image of hope and courage. An old man with all his material possessions destroyed who still wants, in the serenity of his home, to continue listening to his gramophone shows the magical redeeming power of music.

Old Syrians who were born in the 1930s and 1940s still remember the two promising main periods of western democracy the country went though. The first was 1946 to 1949 when the first military coup d’état took place, and the second from 1958 to 1961 when Syria and Egypt hastily created the United Arab Republic, headed by Gamal Abdel Nasser. During both periods, Syria was ruled by democratically elected governments.

Those periods—in addition to a very short period in 1962—were considered golden for the Syrian educated middle class to whom the old man in the photo might have belonged. At those periods, with freedom of speech and the press secured, economy had rapidly been flourishing with increasing GDP, decreasing illiteracy, improving education at all levels, and—what is most important—expanding middle class, the portion of any society leading real development.

Syria was then non-sectarian, much less religiously conservative than now, and women gained most of their rights back then. The second photo shows Shukri al-Quwatli, Syria’s president in the 1950s, with members of the Syrian women federation with the late Mrs. Rima Kurdali Al Azmeh, later president of the “Women’s Cultural Council,” established in1943. The group, where none of the women are veiled, is addressing the president, presumably asking for further equality measures for Syrian women.

Cesar Chelala, MD, PhD, is an international public health consultant and a co-winner of an Overseas Press Club of America award and two national journalism awards from Argentina.

The post-2011 Arab World: change is the name of the game