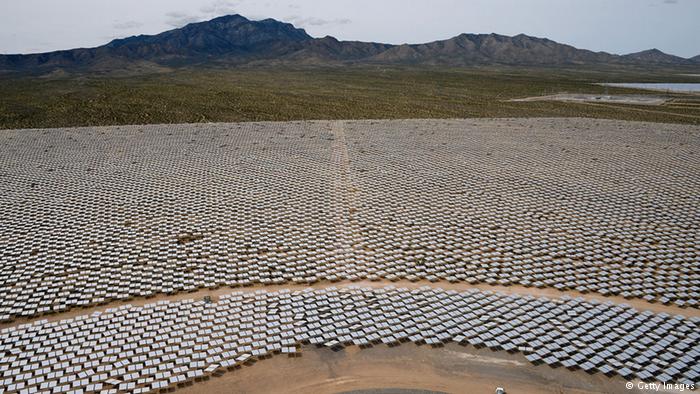 With his latest executive order, President Trump has begun undoing Obama’s plan to counter global warming. But climate experts believe the move away from fossil fuels will continue regardless – leaving the US behind.US President Donald Trump signed his latest executive order on Tuesday, aiming to undo a 2015 plan proposed by former President Barack Obama to limit greenhouse gas emissions at coal-fired power plants.

The so-called “Energy Independence” order targets Obama’s Clean Power Plan, which was intended to require states to collectively cut their carbon emissions by 32 percent below 2005 levels by 2030. The move is intended to give a boost to the struggling drilling and mining industries and create jobs, one of Trump’s key campaign promises.

“We’re going to go in a different direction,” a senior White House official told reporters in Washington. “The previous administration devalued workers with their policies. We can protect the environment while providing people with work.”

Trump’s executive order directs the Environmental Protection Agency (EPA) to start a formal review process to undo Obama’s plan, implementation of which has been on hold since last year as a federal appeals court considers a challenge by several Republican-led states and more than 100 companies.

Tuesday’s order also reverses a ban on coal leasing on federal lands, eliminates rules to reduce methane emissions from oil and gas production and reduces the importance of climate change and carbon emissions in policy and infrastructure permitting decisions.

‘We can put people back to work’

“The past administration had a very anti-fossil fuel strategy,” he said, adding that the Obama administration had made “efforts to kill jobs across this country” with the Clean Power Plan. “So this is a promise [Trump] is keeping to the American people to say that we can put people back to work.”

However, backers have pointed out that Obama’s plan would lead to the creation of thousands of jobs in the clean energy sector, and environmental groups have vowed to take the new order to court.

The executive order could make it more difficult for the US to reach its commitments under the 2015 Paris international climate agreement, which Pruitt – a strong supporter of the fossil fuel industry – has called a “bad deal” because it apparently went easy on leading polluters China and India.

End to the ‘war on coal’

Tuesday’s executive order is Trump’s latest attempt to fulfill his campaign promises of bringing back jobs in the drilling and mining industries and securing the US energy supply, while dismissing environmental concerns raised by climate scientists and experts.

Speaking during a press conference on Tuesday, Trump said his administration was putting an end to the “war on coal” in an effort to allow workers to “succeed on a level playing field for the first time in a long time.”

On Friday, the president gave final approval for the controversial Keystone XL oil pipeline, which would bring more than one-fifth of Canadian oil exports to the United States.

And earlier this month, Trump – whose stance on climate change is unclear, though it leans toward denial – released his proposed 2018 budget, which if approved by Congress would drastically cut funding to science, health and environment programs aimed at combating climate change, including the Clean Power Plan.

“This is an attack on the health, clean air and clean water rights of the citizens of the US,” Keya Chatterjee, executive director of the US Climate Action Network, told DW. “An attack on the Clean Power Plan is an indication that, for Trump and Pruitt, profits for oil, gas, and coal companies are more important than the health of our children.”

Impact may be limited

But, Chatterjee added, “the US economy, with leadership from cities, states, businesses, and citizens, will not stop taking action on climate change, and cannot be stopped. Market forces have reduced coal use in the US, and will continue to do so.”

“The regulations were finalized by the EPA. They technically are [valid],” he added. “The legal process has to work itself through.” If the courts eventually uphold the Clean Power Plan, then EPA will be required to implement it, he explained. Minott went on to say that the Trump administration may try and undo the regulations – which “would restart litigation.”

Minott expects that despite moves to block the process by the federal government, states and companies will continue efforts to limit greenhouse gas emissions so they are not left behind in the clean energy transition.

“The [executive] order will have very little impact in the short term,” said Bill Tyndall, CEO of the Washington-based Center for Clean Air Policy (CCAP). He also believes US power companies will continue to move toward decarbonization in order address the “real business risk” posed by climate change and the global shift away from fossil fuels.

“The US power sector has already made significant progress on reducing greenhouse gases due to the ongoing boom in renewable energy and the continuing low price of natural gas. These market forces will not change with this executive order.”

Tyndall also told DW that he sees the Paris agreement as a lost opportunity for the US. “Countries worldwide are transitioning away from fossil generation to renewables, advanced energy efficiency and other climate-friendly solutions.

“By moving backwards on the Clean Power Plan, the Trump administration is ceding clean energy leadership to other countries rather than positioning the US to be at the forefront of this major economic opportunity.”

‘Growth sector of the future’

In October 2016, the European Union pledged to cut its CO2 emissions by at least 40 percent by 2030, calling clean energy the “growth sector of the future.” Its plan to transition to a low-carbon economy focuses on the development of renewable energies, jobs and growth.

According to its own figures, clean energies attracted more than 300 billion euros ($326 billion) in global investment in 2015. Along with public and private partners, the EU hopes to create 900,000 new jobs in the sector over the next decade.

“We should not be too concerned with the risks of the negative impact of the Trump administration,” Johan Rockstrom, director of the Stockholm Resilience Center at Stockholm University, told the Reuters news agency.

Rockstrom is the lead author of an economic plan published last week in the journal “Science” that could, if implemented, halve the world’s carbon dioxide emissions every decade from 2020 and fight climate change.

He believes China and the EU could lead in pushing forward with increasingly green technologies, as they see the shift from fossil fuels resulting in improved public health and more profitable businesses.