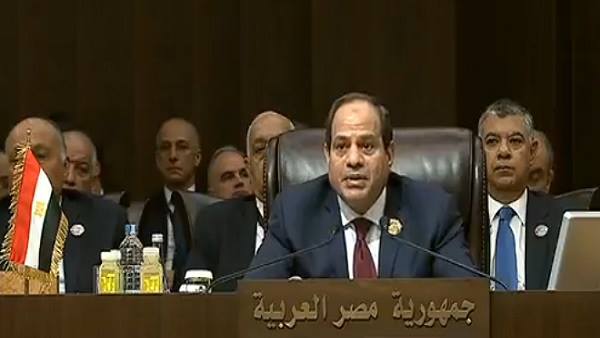 President Abdel Fattah Al-Sisi called for a comprehensive solution to face terrorism during his speech on Wednesday at the 28th Arab League session, which kicked off in Jordan.

“We hold our summit amid serious challenges facing the region, targeting the chore of Arab nation states and threatening our people. This requires a strong stance and unity among Arab countries to maintain the security of our countries and protect future generations,” Al-Sisi said.

Al-Sisi’s argument focused on the aim of terrorist groups to destroy the principle of nation states through weakening state institutions, thus expanding into the region, as sectarian strife continues to endanger citizens’ lives.

“Facing terrorism necessitates military determination as well as economic and human development. We further need to counter extremist thought through education and through empowering our reputable religious institutions, such as Al-Azhar, to raise awareness of Islam’s tolerant teachings and values,” he stated.

Moreover, the president warned of foreign military and political interference from some powers seeking to take advantage of regional instability.

Al-Sisi praised the resumption of the Geneva talks on Syria in the recent period. On Libya, he expressed discontent that the crisis has entered its sixth year. Al-Sisi explained that the problem persists in finding a way to implement political solutions reached in 2015, calling for the necessity to continue working on them without foreign interference. He also urged support for political negotiations in Yemen.

Regarding the Palestinian crisis, Al-Sisi said that it will continue to be “our main cause as Arabs, despite the fact that it has remained unsolved for decades.” He added, “Egypt will pursue seeking a fair and comprehensive solution based on the establishment of a Palestinian state in the borders of 1967 with Al-Quds [Jerusalem] as its capital.”

The summit witnessed the participation of Arab world leaders and representatives from the EU and UN, as well as the Organization of Islamic Cooperation, the African Union Commission, and the Arab Parliament.

The session was headed by King Abdullah II of Jordan. In the opening session, Arab Parliament president Meshaal bin Faham Al-Sulami condemned Israel’s practices, saying that although the international community has taken a stance against those practices, Israel continued its violations and is now speaking about the inability to achieve a two-state solution, saying that Israel’s new plan is doomed to fail.

Al-Sisi met UN Secretary-General António Guterres during his visit to Jordan ahead of the Arab Summit.

Discussions on Syria, Libya, and South Sudan were the focal point of Arab and regional affairs, a statement by the Egyptian presidency said Tuesday. The two further discussed progress made in the Middle East peace process.