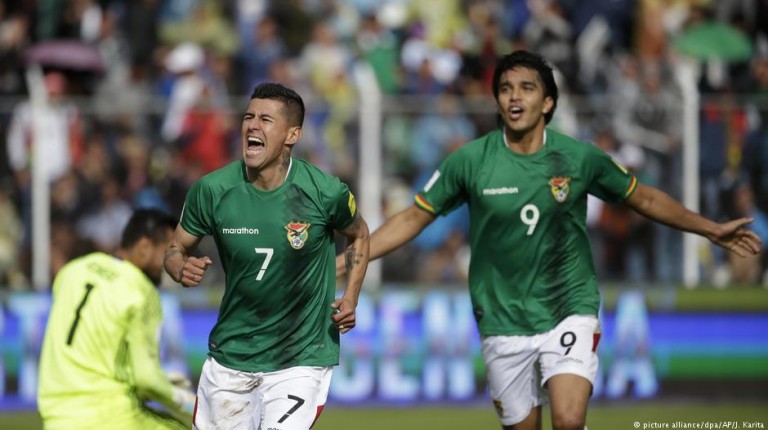 Just hours after a controversial four-match ban for star attacker Leo Messi, Argentina have lost 2-0 against Bolivia in La Paz. Were they missing the Barcelona star, or simply struggling with the altitude?Juan Carlos Arce and Marcelo Martins Moreno netted for the home team either side of half time on Tuesday, securing Bolivia a big scalp in their World Cup qualification campaign.

For Argentina, the result piled on the misery after news that star attacker Lionel Messi would be suspended for four of their five remaining World Cup qualifiers, including Tuesday’s match in La Paz.

The game also took place at extreme altitude, in the highest capital city above sea level on Earth. Visiting teams can sometimes struggle there and several of Bolivia’s starters on the night do ply their trade in La Paz on a weekly basis.

No Messi, no party

Messi’s suspension was tied to an insult apparently directed at a match official during a crucial 1-0 win over Chile last week. Argentina has announced plans to appeal the decision, voicing particular outrage at the timing of the announcement, falling days after the Chile game and only hours before the match in Bolivia. Messi was with the squad and expecting to play until Tuesday’s news.

Beaten finalists in 2014, Argentina’s bid to qualify for the 2018 World Cup is by no means assured. In a 10-country group where four teams progress automatically and another goes to the intercontinental playoffs, Argentina is looking over its shoulder at quality teams in pursuit like Colombia, Chile, Paraguay and Ecuador. Tuesday’s defeat will settle no nerves – and the Albiceleste’s form is notably stronger with the Barcelona magician pulling the strings.