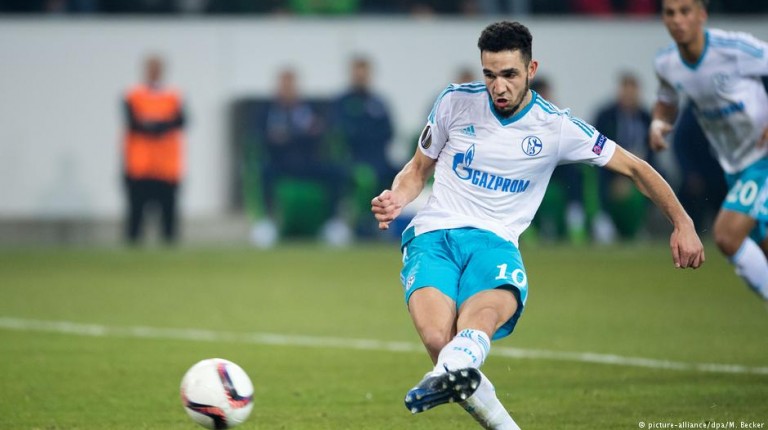 Schalke haven’t had it easy this season, but in Nabil Bentaleb they have not only signed a talented player but also unleashed one. DW’s Jonathan Harding spoke to the Algerian midfielder.It’s not often that a footballer will flip a question back at you, particularly when it comes to winning trophies, but Schalke’s Nabil Bentaleb did exactly that when asked whether he would rather win the derby against Borussia Dortmund or the Europa League title. It was the response of a relaxed human not a media-trained footballer, and it was delivered with a grin that the 22-year-old has long carried around with him. When his own answer did come, it surprised almost as much as his initial response.

“The Europa League title, next season Champions League. What’s better?” Bentaleb says in an accent that sways unusually between north London and French. “Of course I don’t want to think about losing this derby. This is not on my mind for one second, but you give me a question like this… I would rather win the Europa League, so we win a title, and next season we’re in the Champions League. What a great reward, and what a great present for our fans.”

Making the attacking third his own

Schalke’s faithful endured a rough start to a season that began full of hope. Five straight Bundesliga defeats weren’t part of the plan, but an upturn in form followed, for both the club and Bentaleb. Other than the 0-0 draw in his first Ruhr derby, Bentaleb assisted or scored in each of the following five games. He is, in many respects, a new player.

“Tottenham gave me the opportunity that no one gave me in France so I thank them for that, but in Tottenham I was playing in a more defensive position and I knew I could do something offensively. In Schalke, they put me more offensively, to create more and be more decisive for the team. That’s the thing I couldn’t work on in Tottenham.

“When some people asked me to play more forward, it made me realize that I can do both. I added something to my game. Inside, I knew I could but nobody gave me the chance until I arrived here,” Bentaleb says, grateful to his new club for the chance to show off long-hidden skills.

“When I played as a number six at Tottenham they wanted that reliability in the center of the pitch, to always protect, to create the game but deeper, so I was not in the final third. I was creating from the back and passing the ball through the lines, but not the lines to give an assist. In Schalke, I’m most often in the final third and I’m trying to find those last passes or last two passes, or even try to score. That’s the difference.”

There’s no denying that Bentaleb appreciates what Tottenham Hotspur did for him, but it’s also clear how excited he is about the kind of player he is becoming at Schalke.

“The first time I got on the pitch was against Frankfurt and the coach said to me, because we were losing, ‘go and score.’ And since then, my attitude on the pitch is different to when I was playing in England because of the expectation on me. In England they know me as a defensive player. They don’t know I can score or assist. But over here, the German people probably didn’t know about me. And when I came here, I had to make a new impression and the impression I made is that I can create something offensively. It’s not the Nabil Bentaleb that is a good tackler, good passer of the ball, protects the defense. It’s Nabil that can be creative so from the beginning it’s all different from England. But at the same time it’s similar. It’s weird.”

Box-to-box at the core

Between the lines, it feels like Bentaleb is talking about a similar football life but a different football development. They say change is good, and the shrewd nature of his football brain certainly seems to support that.

“We’re in 2017. Now, to be a good midfielder you have to combine both. Since the beginning, they say I’m a box-to-box player. In Tottenham, I was the box-to-box but more defensive. Here, I’m the box-to-box but more offensive. It’s just about what the coach wants and what type of game we’re playing,” Bentaleb says so matter-of-factly that it seems as simple as his words suggest. Watching his movement at training later on that afternoon reveals why it is easy for the midfielder. His feet are quick, his agility is underrated and his finishing has clearly been unleashed.

Perhaps for Tottenham, he’s the one that got away. For the Premier League it’s further confirmation that you can’t have them all. Bentaleb, though, just wanted to play, and to be trusted.

“To be honest, I was not really thinking when I left England, is it a positive or a negative thing? I was looking at: I’m going to get game time. As long as I’m in a great team and I have some people that believe in me at the club I would be confident I will perform. That’s the state of mind I was in when I joined Schalke,” Bentaleb says.

His frame of mind this weekend against Dortmund will no doubt be somewhat different, especially given his previous derby experience at Tottenham against Arsenal. “It’s quite similar. The rivalry is always there.”

Bentaleb was blown away by the thousands of fans who visited Schalke’s training ahead of the last derby game, and admitted he was curious to see how good Germany’s support was having only seen it from afar.

“The Bundesliga surprised me this season. I see a lot of young players, teams who try to play football. It’s difficult every week. You have a lot of young prospects coming through the academy. It surprised me in a positive way,” Bentaleb says, who adds that the league is among the most entertaining along with England and Spain’s top flights.

After a modern, clasping handshake more suited to a teammate, Bentaleb disappears behind the walls of the Schalke museum, walls that are scattered with famous faces of years gone by. If Schalke have already given Bentaleb the opportunity to be the player he always knew he could be, it’s exciting to think where the 22-year-old might be in three years time. Perhaps by then, Schalke won’t be too far off realizing their own potential.

Opinion: If Schalke won’t invest for their own youngsters, why should they stay?