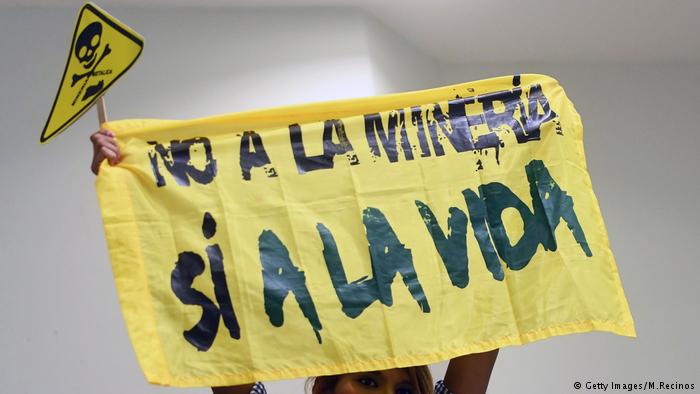 El Salvador’s Parliament has approved a law banning all metal mining projects. The measure aims to protect the impoverished Central American nation’s environment – but critics fear it could hurt the economy.The original legend of El Dorado, originating with an indigenous tribe in Colombia, is actually about a person covered in gold. But the first Spanish explorers to arrive in South America misunderstood the myth. Instead, they brought back tales to their colonial lords about a place named El Dorado that was built out of gold.

In El Salvador, however, the search for El Dorado – be it person or place – appears to have come to an end: The Congress there has passed legislation prohibiting the mining of metals throughout the land.

El Salvador, the smallest country on the American mainland, is around the same size as Slovenia. But its earth is rich with gold – well over 400 tons, according to estimates from the main mining company, Pacific Rim. At current rates, that gold would be worth more than 1.6 million euros ($1.7 million).

The Canadian company had spent years carrying out research in El Salvador’s northern Cabana department, with investments amounting to $77 million, according to its own statements.

But when Pacific Rim wanted to begin digging for gold, the government in the capital San Salvador wouldn’t give way. Then-President Antonio Saca refused to give the Canadians the necessary permits, citing concerns for the country’s drinking water reserves.

In 2009, Pacific Rim responded by filing a complaint with the World Bank’s International Center for Settlement of Investment Disputes (ICSID). The firm also sued El Salvador for damages – demanding compensation amounting to about $250 million – which amounts to more than 1 percent of the country’s annual economic output.

El Salvador defended its actions, saying that Pacific Rim had submitted unsatisfactory feasibility studies and had failed to meet environmental requirements. The government added that the company only had usage rights in one section of the land required for its project.

Seven years later, in October 2016 – by which time Pacific Rim had become a wholly owned subsidiary of Australian venture OceanaGold – the ICSID dismissed the complaint, instead ordering OceanaGold to reimburse El Salvador’s legal expenses of $8 million.

The dismissed lawsuit paved the way for current left-wing President Salvador Sanchez Ceren to go one step further and make mining for metals in El Salvador punishable by law. The draft bill was backed by 69 of the 84 members of parliament.

After the vote, conservative lawmaker John Wright Sol said the result showed “we have looked beyond party disputes. Today in El Salvador, water won out over gold.”

Water supply in El Salvador is a huge problem, especially during the dry season. Since mining slurps up vast amounts of water, building new mines could make the situation worse.

Gold mining is also a dirty business: Poisonous chemicals such as cyanide, mercury and others are used to process gold ore, and their use carries with it the risk of toxic pollution for the soil and groundwater.

Mining has a long tradition in many parts of Central and South America. Even before the arrival of the Spaniards, gold and silver were of significant economic importance. Deposits extend across the continents – from Tierra del Fuego to Alaska. Today, Brazil and Chile are the world’s largest suppliers of iron and copper ore.

El Salvador is the first country to ban the extraction of metals. A similarly far-reaching law was implemented in Costa Rica in 2010, but it applies mainly to opencast mining. Elsewhere, in the Colombian department of Tolima for example, individual municipalities have successfully campaigned against mining concessions.

Juan Carlos Hidalgo, a Latin America analyst from Washington’s Cato Institute, is skeptical that the parliamentary decision will benefit El Salvador in the long run.

“Mining is an extremely controversial activity in Latin America, because in many places it goes hand in hand with corruption,” he said. As a result, he added, regulations are sidelined, often to the expense of the environment.

“It doesn’t have to be that way, though, if there are adequate regulations that are implemented and complied with,” Hidalgo said. “Countries like Chile, for example, have shown it’s possible.”

Yet mining in Chile is not without problems – mining has led to water shortages there as well, against which local communities have protested, also in recent years.

Hidalgo puts the almost unanimous parliamentary decision down to heavy public pressure, and campaigning by environmental organizations and the Catholic Church. He warned that the law could ultimately harm the country economically because it may scare away investors.

Hidalgo says El Salvador’s new law could also have wider implications in Central and South America. “The pressure from environmental organizations to ban mining is high throughout the region. And El Salvador certainly won’t be the last country to prohibit mining.”

Australian mining magnate to donate chunk of his fortune

Al-Sisi’s mega projects: a road to growth or to inflation?