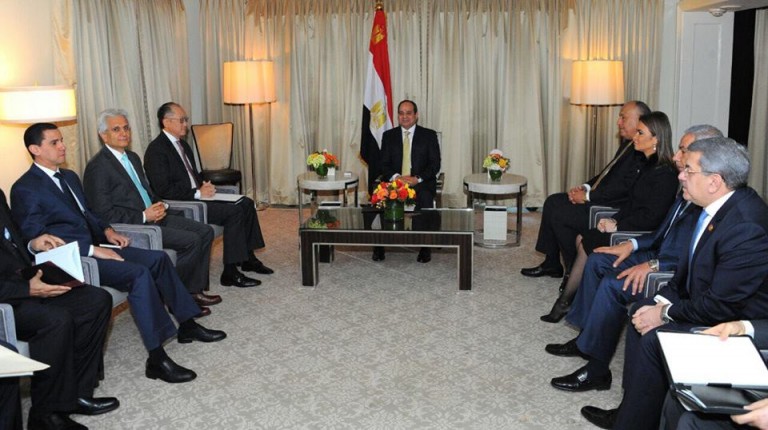 Economic meetings were at the top of the list of activities on President Abdel Fattah Al-Sisi’s first day in Washington. He met with the president of the World Bank, Jim Yong Kim, and executive directors of the General Electric (GE) conglomerate.

The economic meetings preceded Al-Sisi’s meetings with US president Donald Trump, congress members, and US secretaries.

Al-Sisi’s and Kim’s meeting included reviews and discussions on Egypt’s top economic issues. Egypt is currently facing a number of economic challenges due to the implementation of its national reform programme.

Al-Sisi said that the country’s national economic reform programme resulted in an increase in foreign exchange reserves and in more Egyptian exports, along with the rationalisation of imports. Kim praised these results, expressing his confidence in the reform plan as well as development projects in Egypt.

Kim also asserted that the results included improvements for the business climate in Egypt.

He confirmed the World Bank’s keenness to continue the implementation of cooperation programmes with Egypt and to develop frameworks of consultation and coordination between the two sides.

Regarding the World Bank’s role, Al-Sisi expressed his appreciation for the efforts in supporting Egypt at various levels, explaining that the World Bank has supported the implementation of development projects and supported and provided technical assistance to the private sector.

Al-Sisi affirmed that “Egypt is resolved to continue the implementation of its reform programme and to achieve the targeted growth rates, in tandem with the expansion of social safety nets.”

In addition to that, he spoke about the adoption of more administrative and legislative reforms in order to improve the business and investment climate and enhance Egypt’s rating in reports issues by the bank for these fields.

Kim mentioned that he believes Egypt will continue to implement the economic reform programme, stressing that the World Bank, through its various institutions, hopes to help Egypt realise the economic growth to which it aspires.

The meeting also addressed ways to strengthen cooperation between Egypt and the World Bank.

Concerning Al-Sisi’s meeting with directors of GE, the president emphasised Egypt’s keenness to work and cooperate with US companies in various fields, pointing out that GE has much experience and a good reputation in the Egyptian market.

The president reviewed the legislative and administrative measures taken by the government in order to provide an attractive environment for investment, stressing the government is working to remove all obstacles for investors and attract more investments in various sectors.

From his side, CEO of GE Jeffrey Immelt expressed the company’s aspiration to increase its activity in Egypt, especially in light of the promising opportunities in a number of sectors. He praised the economic reform measures taken by Egypt and its contribution to enhancing the business environment and improving the outlook of the Egyptian economy.

Minister of Industry and Trade Tarek Kabil praised the meeting with the World Bank during a televised interview, saying the bank and the government are looking forward to more cooperation to help Egypt.

He added that the US policies related to trade and imports are more closed, explaining that negotiating about signing free trade agreements would currently be difficult. On the other hand, both governments are likely to discuss the Trade Investment Facilitation Agreement (TIFA), which could lead to a free trade agreement in the future.

Furthermore, Minister of Investment and International Cooperation Sahar Nasr stated that the government wants to benefit from American investors who are willing to enter the market.