Egypt continues to maintain its position as the Arab world’s largest consumer market. With an estimated 92 million citizens and one of the world’s fastest growing populations, the demand for food products will continue to grow. Although the country faced various economic challenges following the 2011 and 2013 regime changes and subsequent decreases in tourism revenues, the economic reforms adopted in late 2016 are beginning to bear fruit and become more apparent over the course of 2017. Analysts expect an improvement in economic growth and an increase in purchasing power during the coming years, as well as increased disposable incomes, which in turn should translate into more demand for imported food products, according to the “2016 Annual Retail Foods Egypt” report published by the Global Agriculture Information Network (GAIN). 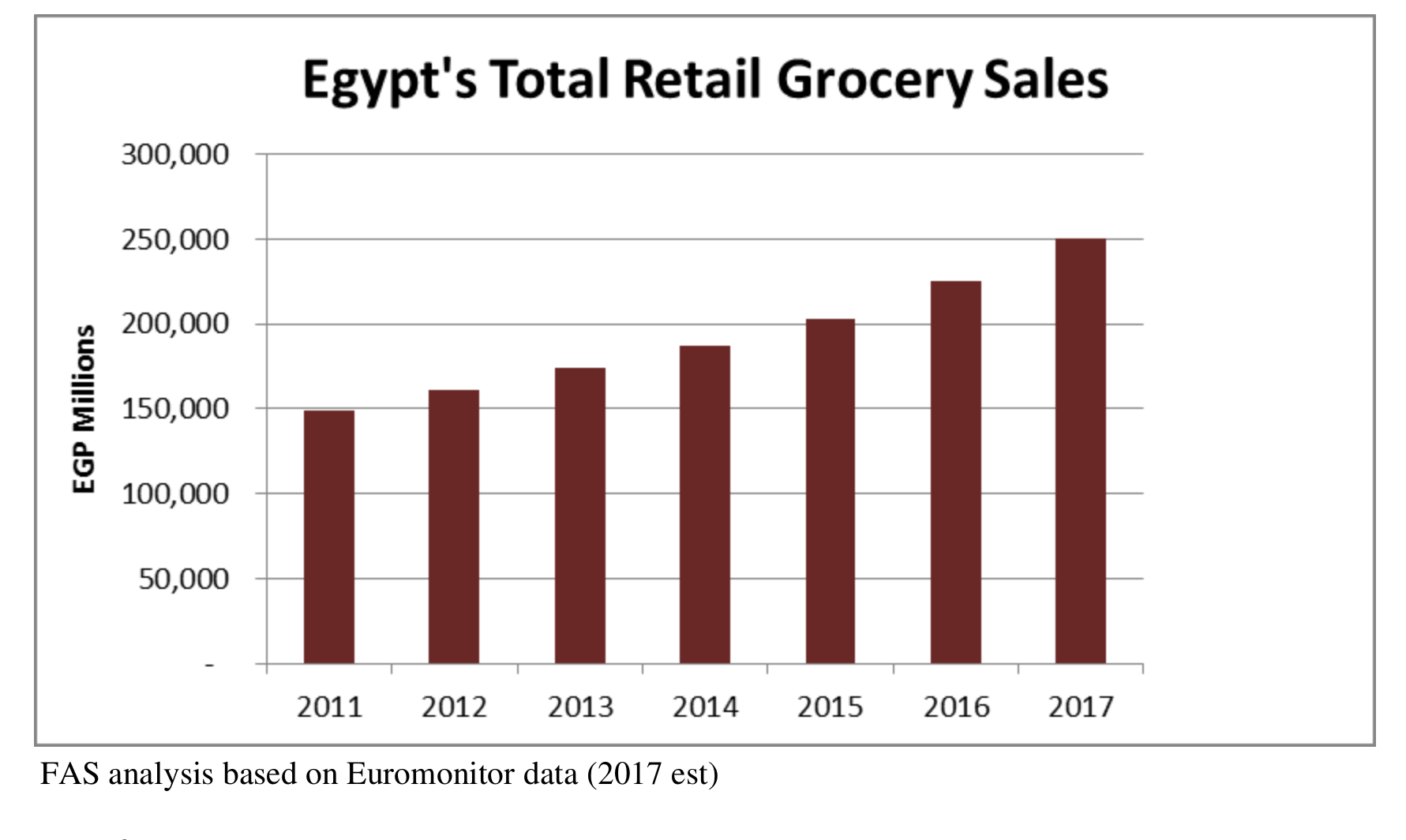 Since the formation of the Arab Republic of Egypt, a planned economy was maintained until the late 1970s, after which the different administrations made gradual market reforms. However, the state still plays a considerable role in the economy, as it continues to be one of the largest importers of many commodities, such as wheat, sugar, and oils, as well as an important vendor of subsidised food products.

Since 2011, political and regional instability have taken a significant toll on the Egyptian economy, much of which can be attributed to a decrease in tourism-related revenues. Egypt has been grappling with significant account deficits, which were counter-financed through foreign aid and loans. Throughout much of 2016, the authorities tried to manage the outflow of foreign currency by reducing imports through import restrictions and capital controls. Such measures had an impact on consumer behaviour, especially among low-income citizens.

Consequently, in order to correct the underlying structural issues of the Egyptian economy, the government adopted an economic reform programme aiming to improve Egypt’s public finances, which included the introduction of the value-added tax (VAT), the reduction of fuel subsidies, the flotation of the Egyptian pound, and the obtainment of loans from the International Monetary Fund (IMF), the World Bank, China, and others to finance its ambitious programme in the period between September and November 2016.

Such measures, in conjunction with a number of other policy shifts, have helped bolster investor confidence and reduce capital outflows.

However, inflation has increased as a result of the devaluation. Official estimates put inflation at 24.3% for 2016, which increased to 31.7% in February, compared to an inflation rate of 10.4 % reported in 2015. 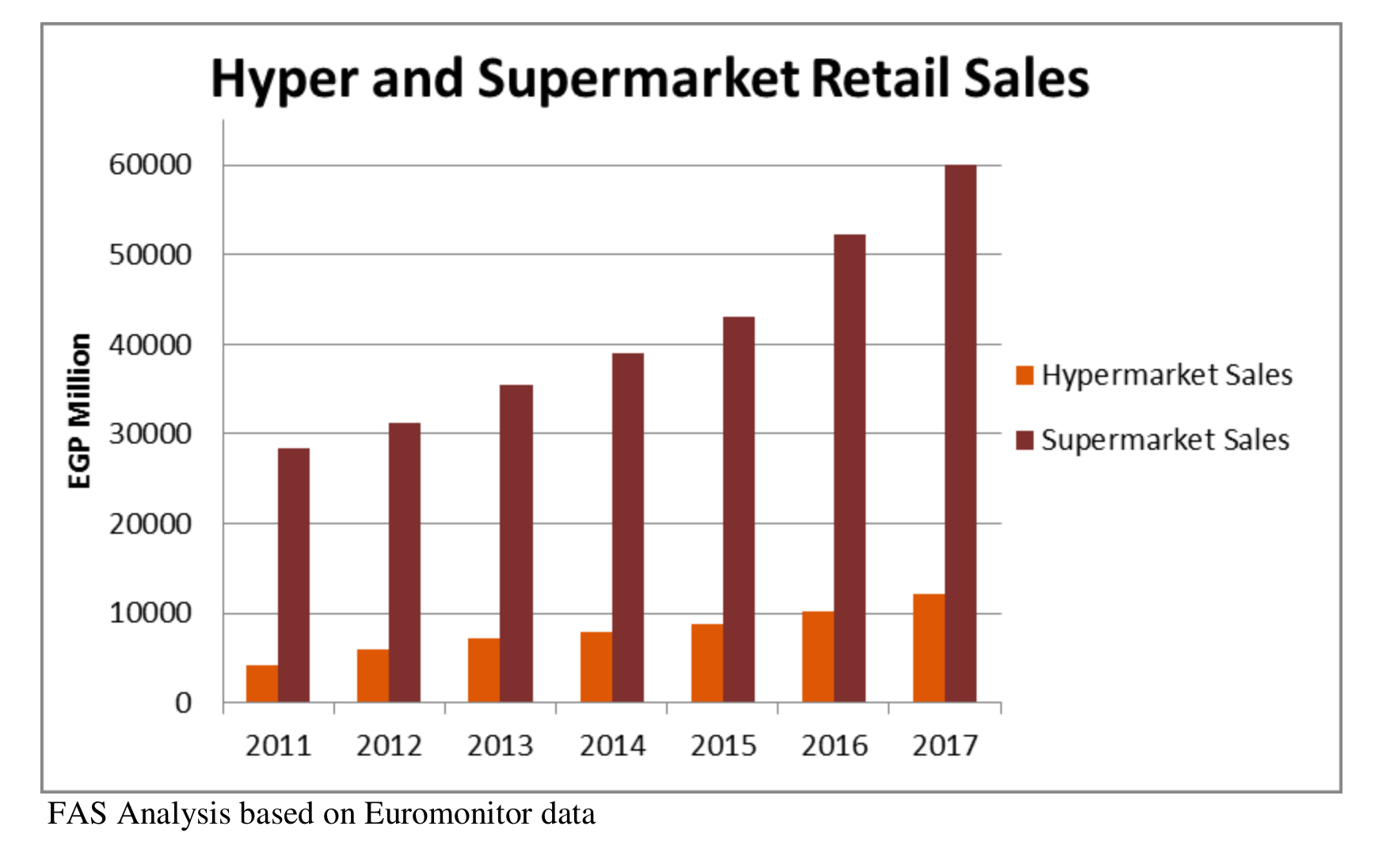 Despite the immediate inflationary pressures, the overall purchasing power is expected to increase, and with it, the ability to purchase imported food products. According to the Economist Intelligence Unit, food, beverage, and tobacco sales in 2016 were estimated at $92bn, or approximately $999 per person, and are expected to rise to $114bn by 2020, while the total retail food sales made up $70bn in 2015, but are forecast to rise to $98bn by 2020.

According to the report, the total value of retail food sales stood at close to EGP 226bn in 2016, in terms of retail food sales from local grocers, markets, supermarkets, and convenience stores—an increase of 11% from 2015. Private sector forecasts project a similar growth into 2017, with sales reaching EGP 250bn.

By the end of 2017, food sales at supermarkets and hypermarkets are expected to have doubled from their 2011 levels. The growth in sales is accompanied by a large increase in the number of small-scale supermarket outlets, including the rapid expansion of Turkish retailer BIM, which started in 2014 with 46 stores and currently has 220 branches, and Egyptian Kazyon, which started at around the same time and now has 168 stores across Egypt.

However, despite the rapid growth, modern supermarket chains still account for less than 1% of the establishments and only 23% of the total sales in 2016; while the hypermarket segment remains small with a total of only 35 outlets operating in the country in 2016, which accounted for 4.5% of total retail sales.

The second segment, convenience stores, witnessed a strong growth in retail sales, with a notable increase of 21.5% in 2016, due to an increase in the number of outlets. The market has seen growth over recent years in stand-alone convenience stores (kiosks) and convenience stores associated with petrol stations—currently numbering 229 locations—and the number of locations is expected to grow by 10% in 2017. Exxon-Mobil is the leader in this sector, with 138 outlets, or 54.5% of the total.

Finally, the traditional small grocery stores and markets that dominate the Egyptian retail scene comprise around 97% of total retail food establishments and 70% of total sales. Their numbers are estimated to be around 116,000 across all governorates. Most of these stores are located in densely populated urban centres, and they include small grocery stores, butchers, fruit and vegetable markets, and bakers that supply subsidised bread. The segment’s main advantage is maintaining a loyal, neighbourhood customer base, as they are easily accessible and sometimes offer credit to local consumers. However, they are clearly constrained by retail and parking space and their inability to compete with larger retailers. 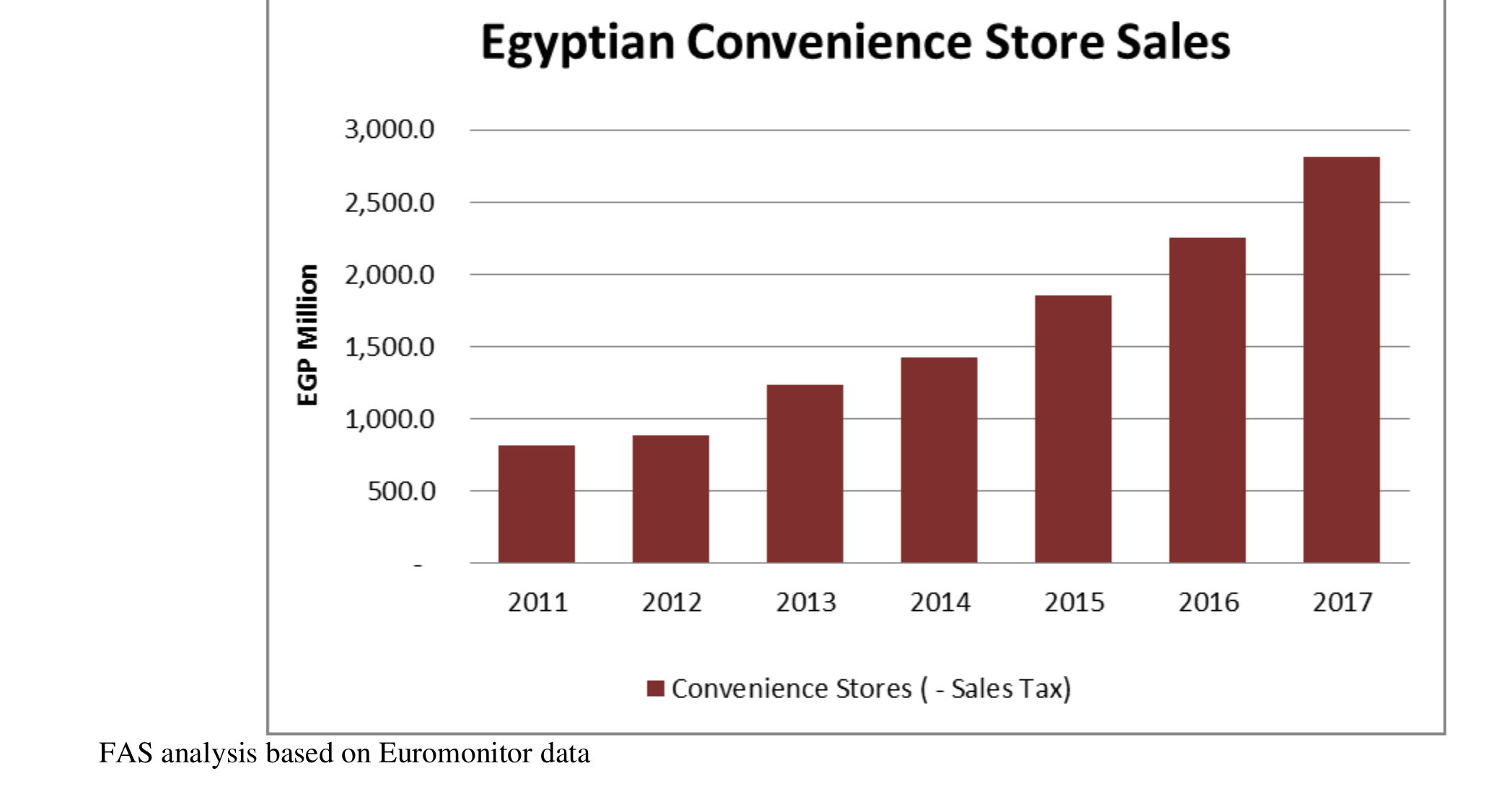 The report cites that the retail grocery growth rate is forecast at 9%, and growth in the number of outlets at 1%. The highest growth rates are among modern retail chains, while on the other hand traditional grocery stores will continue to grow, but at slower rates. Analysts expect to see the larger supermarket chains continue to expand their market share at the expense of the traditional, small privately-owned grocery stores.

The main drivers behind the Egyptian retail sector’s growth are the growing young population and the gradually increasing purchasing power, which has been recovering from the impact of the political unrest in 2011 and 2013, registering an increase of 2.6% in 2015, which marks the highest rate since 2008.

Furthermore, the report indicates that as long as the political and economic situations remain stable, retail growth is expected to continue or increase. In the last two years, the government has consolidated political power and ensured a stable security environment within the population centres, which is positive for continued growth.

It is worth noting that the two largest retailers in 2016 were both newcomers to the Egyptian market.

The Turkish BIM and the local Kazyon stores have both registered massive growths since their initial start of operations in the Egyptian market.

Imported food products in the Egyptian retail market face heavy competition from domestic products. Egyptian snack producers fill much of the domestic demand for chips, crackers, and cookies, although imported brands are perceived as being of higher quality. Egypt produces a wide variety of horticulture products, most of which are sold in the domestic market as either fresh or processed products.

Furthermore, Egyptian meat production meets only approximately 60% of the domestic demand, while the remaining 40% are accounted for by imports. Despite growing milk output, Egypt still imports close to $1bn worth of dairy products annually. Domestic egg production covers almost all demand, while domestic poultry production meets about 90% of the demand, with US poultry products remaining blocked from the market. Egypt’s per capita consumption of chicken stands at about 11 kg/person, which is below the global average.

The report indicates that Egypt has trade agreements with the European Union, Arab countries (GAFTA), African Countries (COMESA), and Turkey, which allows these partners preferential treatment in the Egyptian market, while many US products face a competitive disadvantage to comparable products produced by suppliers from these countries. However, the US remains the most competitive in tree nuts and some beef products, most notably liver.

US exports to Egypt have noticeably decreased in recent years as a result of the strong US dollar, Egyptian capital controls throughout much of 2016, and stiff competition from the EU and others. In 2015, US exports of dairy products—excluding cheese—decreased by 65.6%, while US cheese exports decreased 90.4%, and apple imports decreased by 19.3% . These losses were generally offset by increased imports from the EU.