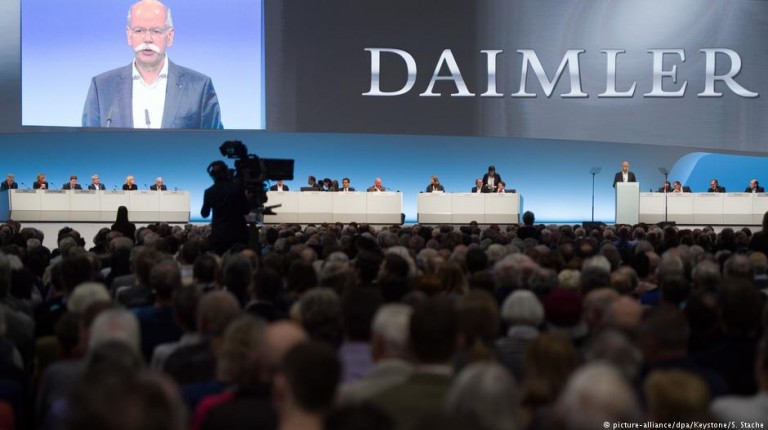 The German premium carmaker and the world’s largest automotive supplier have announced a partnership in the race to build self-driving cars, with their first automated taxi planned to hit the road early next decade.In a joint statement released Tuesday, the two German companies said they had signed a development agreement aimed at “production-ready development of a driving system which will allow cars to drive fully autonomously in the city.”

“By the beginning of the next decade,” the firms hope to produce ‘level 4’ self-driving vehicles- in which the automated system can control the vehicle without human engagement in all but a few environments, such as during severe weather events – as well as more challenging ‘level 5’ fully automated cars, in which no human intervention is required at all, other than specifying the car’s destination. Full ‘level 5’ autonomy – known as an ‘eyes off, brains off” – even does away with the need for a steering wheel.

The current Mercedes E-Class of Daimler has a ‘level 2’ system. It can cruise without driver input on highways, keeping the distance to the car in front and staying in the lane – but a human driver is obliged to pay attention, detect objects and events, and take control when needed.

With ‘level 3’ systems – which are already being tested as prototypes by some companies, but are not available as mass-produced commercial vehicles – human drivers can safely shift their attention away from driving tasks on some known stretches of road, such as freeways, where conditions are not too complex. But they must still be prepared to take control when needed. Level 3 systems are considered by some engineers to be inherently dangerous, because they may tempt drivers to stop paying attention altogether, only to fail disastrously if certain unexpected roadway events occur.

Daimler, the maker of Mercedes-Benz vehicles, has announced recently that it would aim to leapfrog ‘level 3’ development by starting on research for level 4/5 cars straight away.

Financial terms of the Daimler-Bosch deal were not disclosed in the statement. The alliance makes sense for both companies, as it provides a strong counterweight to new auto industry players like ride-hailing firms Uber and Didi which are also working on self-driving cars.

Bosch – which was founded in 1886, the same year that Mercedes founder Carl Benz patented the motorcar – will develop software and algorithms needed for autonomous driving in partnership with the carmaker.

For Daimler and its Mercedes division, teaming up with the parts supplier helps them throw more engineering resources at autonomous cars. Thereby, they are focusing the effort on the app-based car-sharing and ride-hailing sector dominated by China’s Didi, and US-based Uber and Lyft.

“Within a specific area of town, customers will be able to order an automated shared car with their smartphone. The vehicle will then make its way autonomously to the user,” the firms said.

Race for a new market

According to a Goldman Sachs estimate of last year, the market for advanced driver assistance systems and autonomous vehicles is expected to grow from about $3 billion in 2015 to $96 billion in 2025 and $290 billion in 2035.

“If you take the robo-taxi, you start perhaps in a city or several cities or areas of cities, and then you grow from there,” Ola Kaellenius, Daimler board member and head of Group Research and Mercedes-Benz Cars development told Reuters last month. “The key is to get to something that you can commercialize, scale up.”