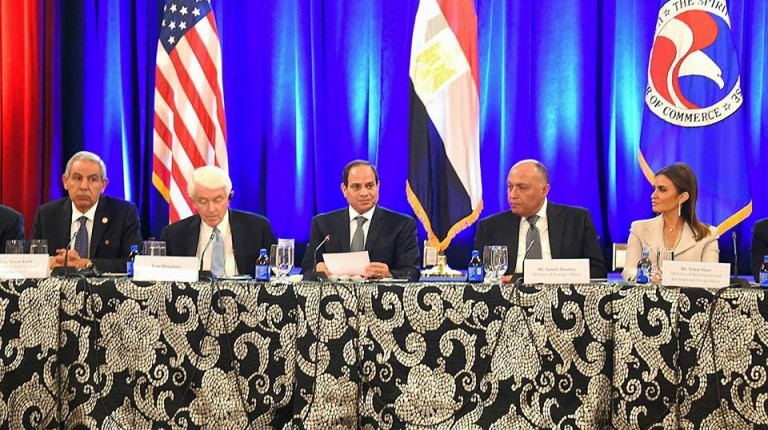 During his five-day visit to the US, Egyptian President Abdel Fattah Al-Sisi held a meeting in Washington on Monday evening with members of the American-Egyptian Chamber of Commerce, headed by its president and CEO, Thomas J. Donohue.

The president stated in his speech that Egypt has become secure and stable and has gained all of its democratic entitlement.

Al-Sisi said that the political changes that Egypt has witnessed imposed heavy economic burdens, explaining that implementing reforms is a now priority to fix the current economic and political situations. He added that Egypt is implementing a reform programme in cooperation with the International Monetary Fund (IMF), emphasising that Egypt has taken important steps in improving the investment climate in the country to attract more foreign direct investments.

He noted that Egypt’s programme depends on 4 main axes: monetary policies, which aim at reducing the budget’s deficit and the national debt; fiscal policies, which aim at establishing a flexible exchange rate that attracts investors and also reduces the inflation; social protection through improving the efficiency of a subsidy system and creating a safety net for the poor; and a structural reform, which would fight bureaucracy and corruption. The president explained that towards those axes, Egypt has taken serious steps, such as floating its currency and reducing petroleum and electricity subsidies.

According to a press statement issued on Tuesday by the spokesperson of the Egyptian presidency, Alaa Youssef, Al-Sisi emphasised during his talks with Donohue the importance of the role the chamber plays in improving the trade between both countries.

He added that the meeting with Trump was important and represents a new start for the relationship with the US, adding that their relations will be strengthened in the next period. The spokesperson added that the Egyptian president looks forward to more cooperation with the US, adding that the private sector has an important role to deepen and strengthen the relations between both countries.

However, according to Youssef, Donohue said that the relationship between the US and Egypt is very precious, adding that the current visit shows a new start for Egyptian-American economic relations.

Donohue added that Egypt is an important partner and ally to the US and that the near future will witness more cooperation between both countries, as well as more transfers of technology.