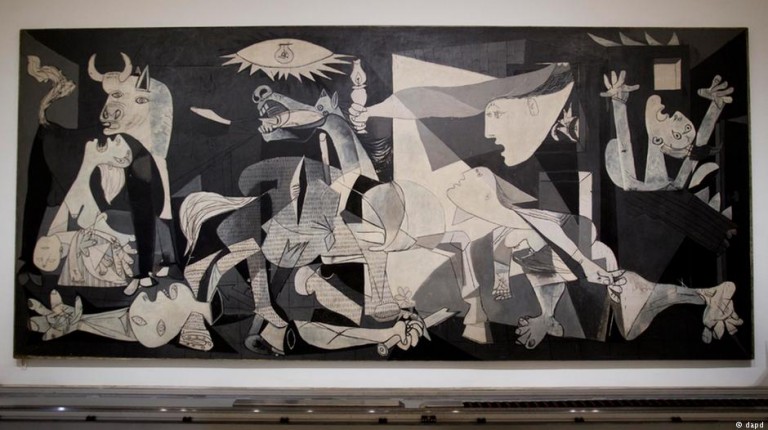 A major new exhibition in Madrid focuses on the artistic journey that led Picasso to paint his monumental anti-war masterpiece, “Guernica.” The iconic work turns 80 this year.Madrid’s Reina Sofia museum of modern art is opening a major exhibition on Tuesday to underline the upcoming 80th anniversary of Picasso’s monumental painting “Guernica.”

“Pity and Terror: Picasso’s Path to Guernica,” which runs until September 4, 2017, depicts the artistic journey that lead the painter to create this anti-war masterpiece.

The exhibition includes some 180 pieces, many from the Reina Sofia museum, which has housed the famous painting for 25 years, as well as works on loan from 30 different institutions worldwide, including the Centre Georges-Pompidou in Paris, New York’s Museum of Modern Art (MoMA) and private collections.

“There is no other piece in the 20th century that has generated so many comments, so many interpretations as Guernica,” said Manuel Borja-Villel, director of the Madrid museum.

The 27-square-meter (290-square-foot) painting depicts the Nazi bombing of the small Basque town of Guernica on April 26, 1937, during Spain’s civil war. Showing women, infants and animals in agony, it is a strong representation of the horrors of war and has become an anti-war symbol used in countless protests.

As so much has already been said and written about “Guernica,” the curators of the exhibition decided to focus on how Picasso’s previous work from the mid-1920s turned towards more macabre themes, possibly in a late reaction to the devastation of the First World War.

This is demonstrated in “The Three Dancers,” normally on show in London’s Tate Modern. The 1925 work shows three figures engaged in a macabre, maniacal dance. It embodies the dark and violent change of direction of Picasso’s art, said Clark.

Women with dead babies, a person crying blood: the show also includes some of the powerful preparatory drawings that Picasso did before painting “Guernica” in May 1937.

The curators avoided analyzing the Spanish Civil War in the exhibition. “That was not our role,” explained Clark, “We wanted to think about the attitudes, the concerns, maybe even the fantasies and obsessions and unresolved knots in the psyche that went into the making of ‘Guernica.'” said Clark.