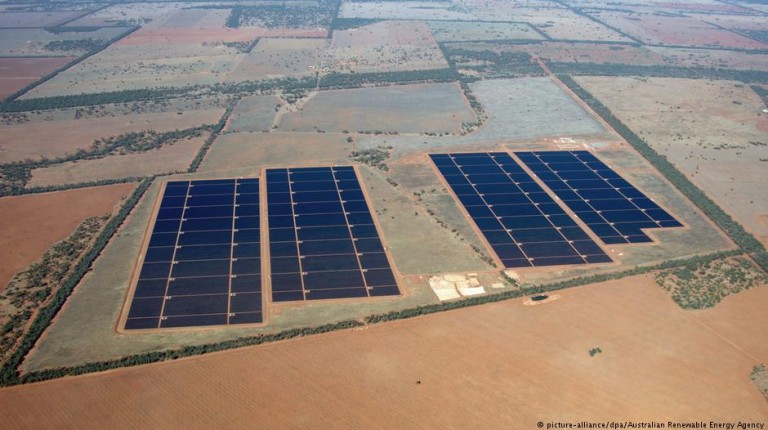 After decades of relying primarily on coal-fired power, Australia has begun investing in a number of large-scale solar farms as it begins its transition to renewable energy. Economic factors are a primary driver.Australia is well-known for its abundance of sunshine. But while the county has largely relied on its coal reserves to generate electricity for decades, solar energy is often described as an untapped resource, with the continent receiving more solar radiation per square foot than anywhere else in the world.

However, this may soon change, as 2016 marked a new milestone for large-scale solar energy projects, with the construction of seven major solar farms around the country.

In 2017, this trend looks set to continue, with the newly announced investment of 1 billion-Australian-dollar (700-million-euro) Riverland Project. This is expected to become the biggest solar energy farm in the world, in terms of energy output.

Located in South Australia’s Riverland region, the project was announced following a serious of widespread power failures in the state over the past year, which had prompted widespread concerns over the future of energy security.

The solar farm is being spearheaded by private investors through the Lyon Group, which have also proposed a second, smaller project in the state’s north.

Large-scale solar energy is responsible for only 0.2 percent of Australia’s national energy mix – but this figure is likely to increase quickly. Over the past decade, Australia’s use of solar power has increased from 73 megawatts (in 2007), to 5,632 megawatts in 2016.

The solar energy boom will allow Australia to begin the transition away from coal, which has long remained one of the country’s biggest industries.

As states around the world strive to decarbonize their energy systems and economies, Australia’s once-thriving coal industry faces a less optimistic future than in past years – despite this week’s green-lighting of the controversial Adani coal mine in north Queensland.

Evan Franklin from the Research School of Engineering at the Australian National University told DW it was only a matter of time before Australia developed a significant market for large-scale solar projects, as the energy economy becomes increasingly competitive amid global constraints on carbon.

“Falling costs, [along with] the learning effect from building the first few large projects in Australia and hence lower financing costs, have all contributed to the rapid shift to large-scale solar,” he said.

At the same time, wholesale energy prices are on the rise, he explained. “This, combined with a lack of certainty around investments in other power generation technology, has resulted in further incentive to invest in solar generation.”

“Large-scale solar has finally come of age over the last few years, partly due to a concerted push by the Australian Renewable Energy Agency, which has helped to massively reduce the costs of building the technology,” he said.

“The cost of generating large-scale solar is now less than half what it was just a couple of years ago – and is now close to the cost of the cheapest wind power projects.”

However, it may be some time before solar farms can compete with the popularity of rooftop solar panels.

Almost 1.6 million Australian homes and businesses have solar panels installed on their rooftops, contributing 2.4 percent to the country’s total energy mix. That equates to roughly one in seven homes.

Over the past decade, the cost of installing rooftop solar panels has decreased by approximately 80 percent, giving Australians a clear incentive to manage their personal energy use and electricity bills.

Franklin believes that while large-scale solar is likely to overtake rooftop solar in Australia eventually, the advantages of rooftop solar will continue to attract consumers.

“Rooftop solar power is a long way ahead in Australia,” Franklin said. The retail electricity environment effectively incentivizes rooftop solar – “and we seem to have quite a culture of or desire for a level of ‘energy independence’ in Australia, too.”

But in his view, future generation of solar power will need to be more tied to power systems management. “This is almost certainly most easily done by participation of large-scale solar farms.”

Bretherton points out that solar farms are ultimately more efficient than rooftop solar panels, which should encourage a future shift.

“Economies of scale associated with such large projects help to substantially reduce the costs of generating electricity,” he explained.

Solar farms also have much shorter lead times than wind farms, which he pointed out as a substantial advantage when the renewable energy target stops encouraging new large-scale projects in 2020.

Leading the way in solar research

Despite slow uptake in large-scale operations, Australia has long been an international leader in solar power research as the uptake of the new technology continues to grow around the world and increasingly competes with conventional fossil fuels.

While China and Germany are currently the largest producers of photovoltaic (PV) solar power, Australia has had a major influence in the PV manufacturing industry.

“Many of the technologies we see in solar cells produced today, many of which are responsible for improving efficiencies and reducing costs, include breakthroughs and advancements developed by Australian researchers,” said Franklin.

Australia is already at the forefront of development in terms of integrating high proportions of solar into the power system. “This means that we also have a very important research role to play in this area over the coming years,” he concluded.

Solarworld to file for insolvency

A new path to a low-carbon economy