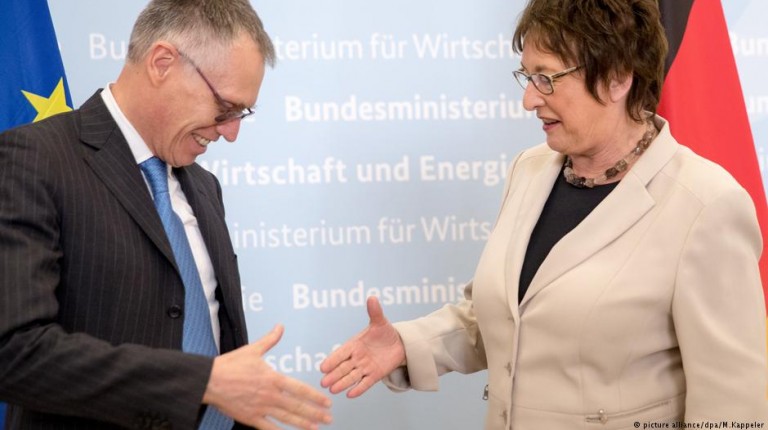 A joint statement issued after the meeting described the talks as “constructive,” saying the takeover of Opel/Vauxhall by PSA “can offer significant advantages” for both carmakers.

Opel employs 19,000 people in Germany out of a total workforce of 38,000 spread across seven countries. Vauxhall, the British brand, employs 4,500 people at two plants. The sale of GM’s European division to PSA has raised concerns about job losses.

Zypries said Germany would continue to provide “constructive support” to the merged company at both a federal and state level.

“I am glad that we have made further progress, not least in the interest of the employees of Opel/Vauxhall,” she said, adding that she particularly welcomed Tavares’ statement to continue all collective agreements.

Opel workers secured a jobs guarantee from GM, the previous long-time owner of Opel, that runs until the end of 2018, and a pledge to continue investing in German sites until 2020, among other deals.

However, the company has booked repeated losses, costing its Detroit-based parent around $15 billion (14 billion euros) since 2000. More recently, sales have been growing, but have been unable to drag Opel out of the red.

Nevertheless, PSA insisted that no layoffs were currently foreseen. Tavares said there are ways to contain factory costs other than cutting workers, and that the company would focus on logistics, quality, energy, maintenance and security. He also promised that Opel/Vauxhall would remain an “independent carmaker.”

Industry analysts are more skeptical about the 155-year old company, which is known for its lightning-bolt emblem. They incline to the view that job cuts are likely inevitable over the medium term.

Representatives from the Opel works council and Germany’s powerful metalworkers’ union, IG Metall, were also guarded after the meeting, saying only they were prepared to “engage in discussions on the future of Opel” once the takeover plans were in place.

All sides agreed to meet again to continue the talks, albeit at an unspecified future date.