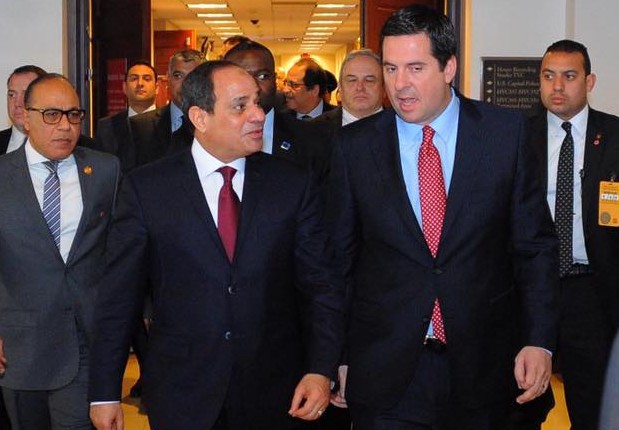 The Middle East region has suffered from chaos and instability over the last 4 years, as well as a power vacuum, which was exploited by extremist groups in Syria, Libya, and Egypt, said President Abdel Fattah Al-Sisi in an interview with Fox News on Wednesday. Its a very difficult task to confront such groups, but Egypt has achieved great progress in confronting “Ansar Beit Al-Maqdis” in Sinai, he added.

When asked if he believes that UN peacekeeping troops should be employed in Libya, Al-Sisi explained that we need to support national armies, and that he has personally demanded that the embargo on the Libyan army be lifted in order to assist them in performing their mission to take control and ensure stability. He added that the region cannot afford more instability, and that leaving the Libyan people captive to extremists isn’t acceptable.

Furthermore, in regards to Russia’s role in Syria, Al-Sisi explained that Russia has interests there and in the overall region, adding that various events over the last 4 years have occurred and caused chaos, including the vacuum left by the Obama administration and their support to terrorist groups.  “We want to turn this around and we can’t do that without the US, because without it there wouldn’t be any resolutions, and with Trump in office I believe he can achieve things others couldn’t” Al-Sisi asserted.

On the other hand, he emphasized the importance of Egypt’s relations with the Gulf allies, explaining that the security of the Gulf region is part of Egypt’s security. He added that Egypt and the Arab countries can achieve security together.

In his meetings with congressmen, the issue of human rights concerns was raised, and Al-Sisi responded that Egypt respects all of its citizens, but maintaining a balance between protecting the nation from extremist ideas and protecting human rights is needed.

Regarding the Aya Hegazy case, Al-Sisi said, “We always act with respect for the judiciary and the law in Egypt. We respect all citizens, whether Egyptian or Egyptians with American citizenship. It’s now being looked at in the court, and as soon as the court issues a verdict, I will have the authority as a president to act.”

In response to the question that some Americans view him as an autocrat, he explained that his first term will come to an end in one year, so he will have stayed for four years, and maybe he’ll stay for four more years if the people accept him; and that’s it. He added that if he was a dictator, he would stay for 30-40 years against the will of the people.