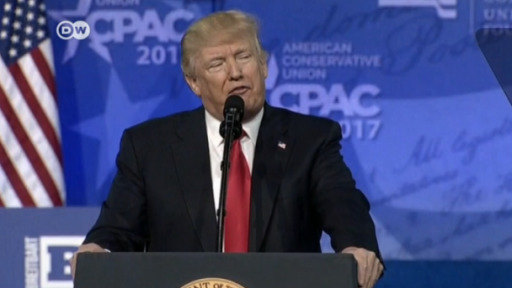 On June 3, the Dresden Symphony Orchestra will perform on the US-Mexican border, joined by musicians from both countries. Orchestra director Markus Rindt tells DW why he even sees the potential for something much bigger.”Tear Down This Wall!” is the name of an artistic project with which the Dresden Symphony takes a stand against walls – both real ones and the kind in people’s minds. The crowdfunding-financed concert could possibly give start to a chain of events along the full length of the border between the US and Mexico, hopes its director.

Deutsche Welle: How was the idea born to stage a concert on June 3 in Friendship Park, on the border between San Diego, California and Tijuana, Mexico?

Markus Rindt: We were invited to tour Mexico. Then I kept reading about plans for Trump’s wall. Nine meters (30 feet) high, it’s an abomination in our day and age. So we thought: as long as we’re in Mexico, why not to take a stand – and at the same time, draw attention to the miseries of refugees in the Mediterranean Sea and along the many borders of this world, also in Europe?

What does the border look like in Friendship Park?

The fortification is very high there, and the holes in the grated fence are just big enough to poke your fingers through. But we are also calling on other people all along the 3,200-kilometer (2000-mile) border to join in. We want peaceful protest, original artistic actions, volleyball games over the wall – at least at those locations where it’s not too high -, music, dance and performance of every kind. We want to make a statement that walls are not the solution to this world’s problems. The title “Tear Down This Wall” is a quote from the famous speech Ronald Reagan gave at the Berlin Wall nearly exactly 30 years before, on June 12, 1986.

The concert itself is sponsored by crowdfunding, but the much wider activities will depend on whether the American media picks up the story. What are your expectations for this?

The people at the internet platform we’re working with were enthused, and a number of artists on the American side think it’s fabulous. We’ve built a good network already. If the media in the US pick this up – and we don’t yet know whether they will – there’s a good chance that a lot of people will join us. The protest has to be as strong as it can possibly be on that one day for the message to get across. There must be a lot of artists in smaller border towns who haven’t had the confidence to do anything yet about these monstrous plans. Reaching all these people will be a big challenge, but we’re optimistic. If someone wants to take part, they can film what they’re doing and post it using the hashtag #TearDownThisWall. Then it’ll be found and published.

Have you had personal experiences with walls and fortifications?

I grew up in what was then East Germany, had a good education and a position in an orchestra, but felt confined – so I decided to leave the country. That was in October 1989, during days of turbulence and transition. I fled via the German embassy in Prague and was one of those people in the trains that received a warm welcome when we arrived in the West. They gave us a wonderful reception, and I’ll never forget it.

And back in East Germany, people were demonstrating peacefully on behalf of freedom day after day. These are the people who brought about the Wall’s collapse. This is probably unique in world history. Because those protests were successful, we thought: why shouldn’t we give it another try – and at the same time, draw attention to the misery of refugees in Europe? Almost nobody has that on his agenda anymore. We want to draw attention to what is happening in Hungary – or in Turkey on the border to Syria.

We often see concerts with musicians who come from different countries, and the thing is marketed as an example of international understanding. Sometimes the connection is a bit nebulous. But you go further. Your activities are concrete and unambiguous. Why?

Because we’ve seen that cultural activities can have an effect, be it our “Concert for Palestine” on the West Bank in 2013 or the Maya Project with artists from Guatemala and Mexico in 2012. But the biggest coup was “Aghet” in 2015. A century after the genocide of Armenians during the Ottoman Empire, we launched a reconciliation project, with our musicians joined by ones from Armenia and Turkey. After Turkey launched a formal protest, the project was suddenly noticed everywhere. I had the impression that we prodded the issue partway onto the public agenda, one that before that had fallen into obscurity.

“Tear Down This Wall” stands on an internet platform. How does that actually work?

Kickstarter is a crowdfunding platform run in the US, but it also has a Mexican division. People can make a contribution to our concert there for as little as 10 euros ($10.67). For each contribution, they get back something in return, like a concert recording. If we can collect 15,000 euros ($16,000), the concert can go on. Should more money come in, maybe we can do a documentary film or hire more musicians. People just have to go to kickstarter.com, type in “Dresdner Sinfoniker” and the project is described there.

You’ve probably already spent a lot of time filling out forms. Were you given a friendly reception by the authorities?

Yes, there’s been a lot of bureaucracy, and you have to make a written declaration of precisely what will take place. We’re still in the application process and don’t know all the details yet. What happens for example if 2,000 people show up rather than 100? Actually, I don’t see many problems on the Mexican side…

That of course leads to an obvious question!

It will be interesting to see whether the permits will be granted by American authorities. If our American colleagues are not allowed to participate…

That news would really catch attention! Not that I’d wish for that …

Anyway, this is not primarily a political event but a border-transcending concert, an artistic project and a gigantic happening. If US-American authorities didn’t give permission for musicians to perform in our concert in Friendship Park, we’d really have to pose difficult questions about the state of artistic freedom in America.

Crossing borders musically: Dresdner Sinfoniker will not be silenced